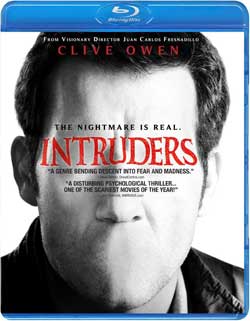 Two children living in different countries are visited nightly by a faceless being who wants to take possession of them.

Following in the footsteps of previous franchises like the “Boogey Man“, “Intruders” anchors on one of the most common fears of all…the dreaded “thing” in the closet. Taking that a step farther, is the manifestation of what appears in the shadows to young children when they have gone to bed. But what if that same manifestation is experienced by an adult? Or better yet the father of the child in terror? “Intruders” tackles this idea at first by proposing its terror “within” that of nightmares progressing that into the real experiences of those being traumatized.

Beginning in Spain, young Juan (Izán Corchero) is visited one night by a specter phantom of origin. It’s faceless hooded stare is further enhanced by its somewhat ethereal floating body (yep like those reaper things from Harry Potter films). It enters thru a window intent on stealing the “face” of young Juan (Its “lack of” positions a need to acquire an identity). Aided by his now startled mother, the 2 of them barely escape the entity’s ‘s menacing grasp as it hangs from the outside scaffolding. This begins our initial (and subtitled) story. 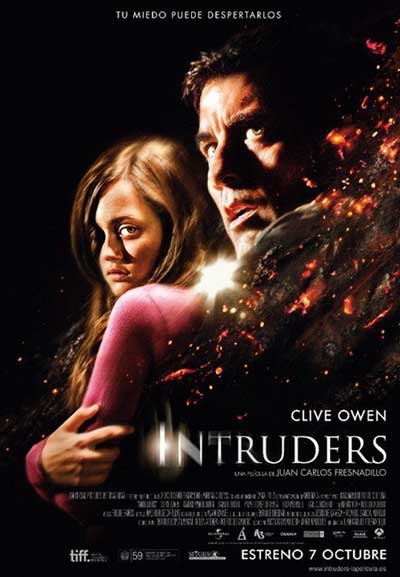 Juan and his mother must deal with this dark stranger who apparently is focused on revisiting them in pursuit of the face he so desires (like the “Jeepers Creepers” character who obsesses once he gets your scent). This thing is given a name thru the writings of young Juan. At first refereed to as Hollowby, the entity is fleshed later out to be called “Hollow Face”. Juan and his mother visit local priests in efforts to vanquish this dark entity from their lives. 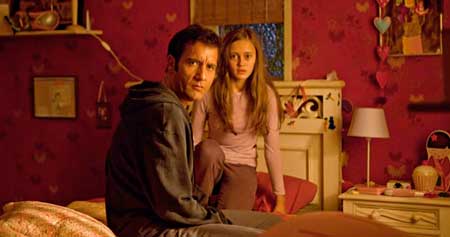 Flash to a completely different setting as young Mia (Ella Purnell) is having a birthday celebration. Her father John Farrow (Clive Owen) and mother Susanna (Carice van Houten) delight in seeing their daughter enjoying herself on this special day. It is soon disrupted by this same phantom as they all call it a night. Mia, like Juan begins a similar path when she discovers an old wooden box tucked away in a tree pulling out a short story describing Hollowface (As if the reading itself is enough to give it life again).

Mia becomes increasingly haunted, while her father John is pulled into the experience upon seeing it for himself one night. The girl seems to be fueling its existence thru a short story she insists on continuing. John, despite every effort is powerless against such an unnatural force which is geared on claiming the face of his daughter.

A bit of the psychological flip flop brews up which puts all in question, distorting reality and the aspect of shared paranoia. “Intruders” the movie, seems to love its ability in confusing its viewers long enough to keep things always fresh and inquisitive. Visually it stays exciting enough to ponder what the next move might be. Being a fan of Clive Owen starred films, I thought it great to see him take on a true horror genre driven project.The production is well funded keeping its parts professional and theatre quality.

“Intruders” is a well played out thriller that succeeds in keeping things tense and dark within a solid grounding of mystery. This entity so named Hollow face” almost begins to take on an iconic style that has seemed to work for past films that involved some kind of dark lurking evil. I was reminded of the series “Supernatural” which I could see this character showing up occasionally to challenge of the Winchester boys. Though despite its certain connectivity to a popular TV show, “Intruders” lives up to spawning an original film on its own accord. Directed by Juan Carlos Fresnadillo, “Intruders” keeps alot of its more action driven screens in dark places. It is almost a given that audience members will be yelling out solutions on their own like “turn on the lights” or “re-write the story”, however this monster film has a larger premise/reveal in play that works nicely from start to final act. It was creepy enough to keep my family engaged while staying away from more R-rated aspects such as blood, gore, guts and murder. “Intruders” is one of the more original supernatural films of this year.

Intruders is now available on blu-ray per Millennium Entertainment 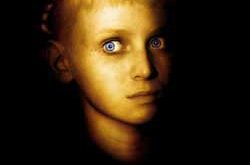