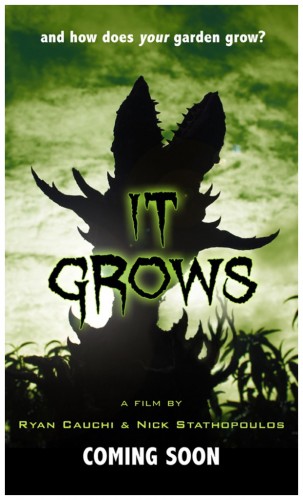 Whip out your weed-wacker! IT GROWS is a new horticultural horror comedy that looks like a combination of The Thing, The Little Shop of Horrors, The Day Of The Triffids and The Blob. Produced and written by award-winner Nick Stathopoulos and directed by talented up-and-comer Ryan Cauchi, IT GROWS will start life as a short film and then, hopefully one day, bloom as a fully-grown feature film. All they need is enough manure…so to speak. I was lucky enough to meet the team on the set of See You Next Wednesday! a television program hosted by Nick, presenting Hollywood classics every Wednesday night on TVS Sydney.

The concept for IT GROWS germinated during the production of See You Next Wednesday! when the budding filmmakers started mulling over ideas, agreeing to one day make a short horror film together. Soon that day came, and it was decided that the production (and therefore costs) was to be kept at a strict minimum, as these sorts of projects can easily collapse while still on the drawing board. The team are bravely trying to avoid relying on CGI for their special effects, attempting to capture as many effects as possible in-camera, utilising a Canon 550D digital SLR. Both filmmakers obviously adore models and puppets, and insist on an old-school non-digital look.

Nick Stathopoulos is one of Australia’s most celebrated artist-illustrators, responsible for some of the best cover art in Australian science fiction and fantasy, extensive box art and graphics for computer games, and worked for both Hanna Barbera and the Disney Corporation as a background artist. His talents include traditional and digital painting, storyboards and conceptual art, set painting, sculpting and scriptwriting. Working for film and television, Nick has designed productions, art directed, painted cycloramas, drawn storyboards and built props. Nick has worked on commercials and music videos, and his illustrations have graced the covers of books by Terry Dowling, Ian Irvine, Josephine Pennicott, Jack Dann and John Marsden. Nick’s work has also won a Penguin Television Award for Art Direction and, in 2003, he was a finalist for the Archibald Art Prize for portraiture with his painting of Mister Squiggle and his creator Norman Hetherington. Nick Stathopoulos has since become a regular name found among Archibald Prize finalists almost every year.

The script is finished, miniatures have been constructed, lighting and colour tests are complete but, although it’s currently summertime here in Australia, the entire season has been extremely overcast. Once the sky clears, there’s nothing to stop these unlikely landscapers. I’ll quickly wrap-up this article with a big thanks to all my good friends at Undead Backbrain and Moovy Boovy for bringing this wonderful news to my attention. I’m convinced you’ll show your gratitude too, by popping in again next week when I dig-up another terror from beyond at the bottom of the garden path for…Horror News! Toodles!