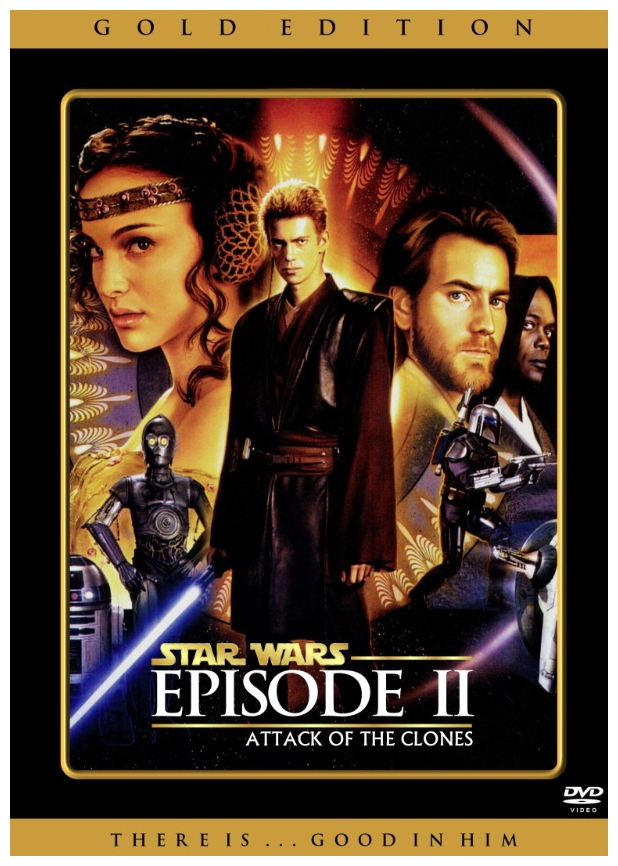 “Ten years after the invasion of Naboo, the Galactic Republic is facing a Separatist movement and the former queen and now Senator Padmé Amidala travels to Coruscant to vote on a project to create an army to help the Jedi to protect the Republic. Upon arrival, she escapes from an attempt to kill her, and Obi-Wan Kenobi and his Padawan Anakin Skywalker are assigned to protect her. They chase the shape-shifter Zam Wessell but she is killed by a poisoned dart before revealing who hired her. The Jedi Council assigns Obi-Wan Kenobi to discover who has tried to kill Amidala and Anakin to protect her on Naboo. Obi-Wan discovers that the dart is from the planet Kamino, and he heads to the remote planet. He finds an army of clones that has been under production for years for the Republic and that the bounty hunter Jango Fett was the matrix for the clones. Meanwhile Anakin and Amidala fall in love with each other, but he has nightmarish visions of his mother, so they travel to his home planet Tatooine to see his mother, and he discovers that she has been abducted by Tusken Raiders. Anakin finds his mother dying, and kills all the Tusken tribe, including the women and children. Obi-Wan follows Jango Fett to the planet Geonosis where he discovers who is behind the Separatist movement. He transmits his discoveries to Anakin since he cannot reach the Jedi Council. Who is the leader of the Separatist movement? Will Anakin receive Obi-Wan’s message? Will the secret love between Anakin and Amidala succeed?” (courtesy IMDB)

George Lucas: “It takes me ten years to do one of these trilogies. I thought very long and hard about going back into it. I started when I was 28 and will finish when I’m 61. That’s a lot of my life taken up with this. I took a long break and really wasn’t sure whether I ever wanted to come back to it. But I came to the realisation that I was going to have to accept the fact that regardless of whatever else I do, Star Wars is always what I’ll be recognised for.” Even diehard Star Wars fans were increasingly wary about what Star Wars II Attack Of The Clones (2002) might bring after the generally frosty reception that greeted Star Wars I The Phantom Menace (1999). Would it be the same deal, an incongruous mishmash of bravura special effects sequences, childish humour and long-winded political jargon? Or would this be a return to that beloved galaxy far, far away that baby-boomers remember so fondly? Well, yes and no. In a nutshell, Attack Of The Clones is genuinely superior to The Phantom Menace in every way. It’s darker, more menacing and more spectacular. If not for Hayden Christensen‘s oily Anakin, it might even be better than Star Wars VI Return Of The Jedi (1983). 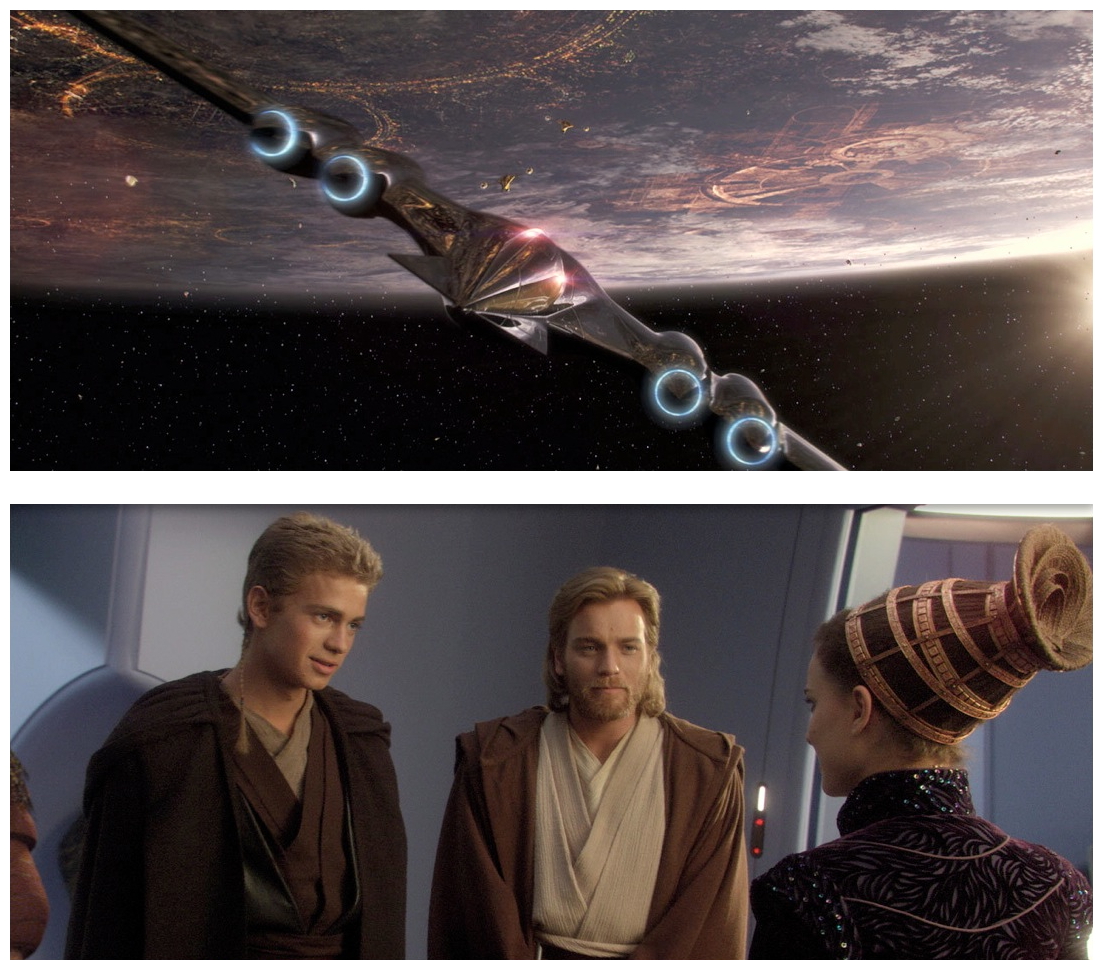 As expected, it’s crammed to the rafters with astonishing vistas, boasts more crazy critters than a million cereal packets, introduces a great new villain and fleshes out some of those characters introduced in the first chapter. There’s a lot less Jar Jar Binks (Ahmed Best), more of Ewan McGregor‘s uncanny Alec Guinness impersonation (though it’s a pity that it hamstrings his charisma to such a degree) and even some much-appreciated navel-baring from the lovely Natalie Portman. Unfortunately, Christopher Lee struggles on occasion when attempting to breathe life into the pretentious dialogue written by George Lucas and Jonathan Hale. It’s grim indeed when, during one of his expositional speeches, Lee is forced (not once but twice) to put the same dramatic emphasis on his pronunciation of ‘Darth Sidious’ to a captive Obi-Wan. And Hayden Christensen? Admittedly, it’s a tough role, but jeez, could anyone have been any worse? His love scenes with Portman are the equivalent of Jar Jar Binks’ scenes in The Phantom Menace. Basically, they’re awful and, to be completely frank, when were the Star Wars films ever about the actors? There are reasons why Mark Hamill‘s film career ended in 1983, why Carrie Fisher became a writer, and even the most avid fans would agree that Harrison Ford wasn’t exactly dynamite in Star Wars VI Return Of The Jedi (1983). 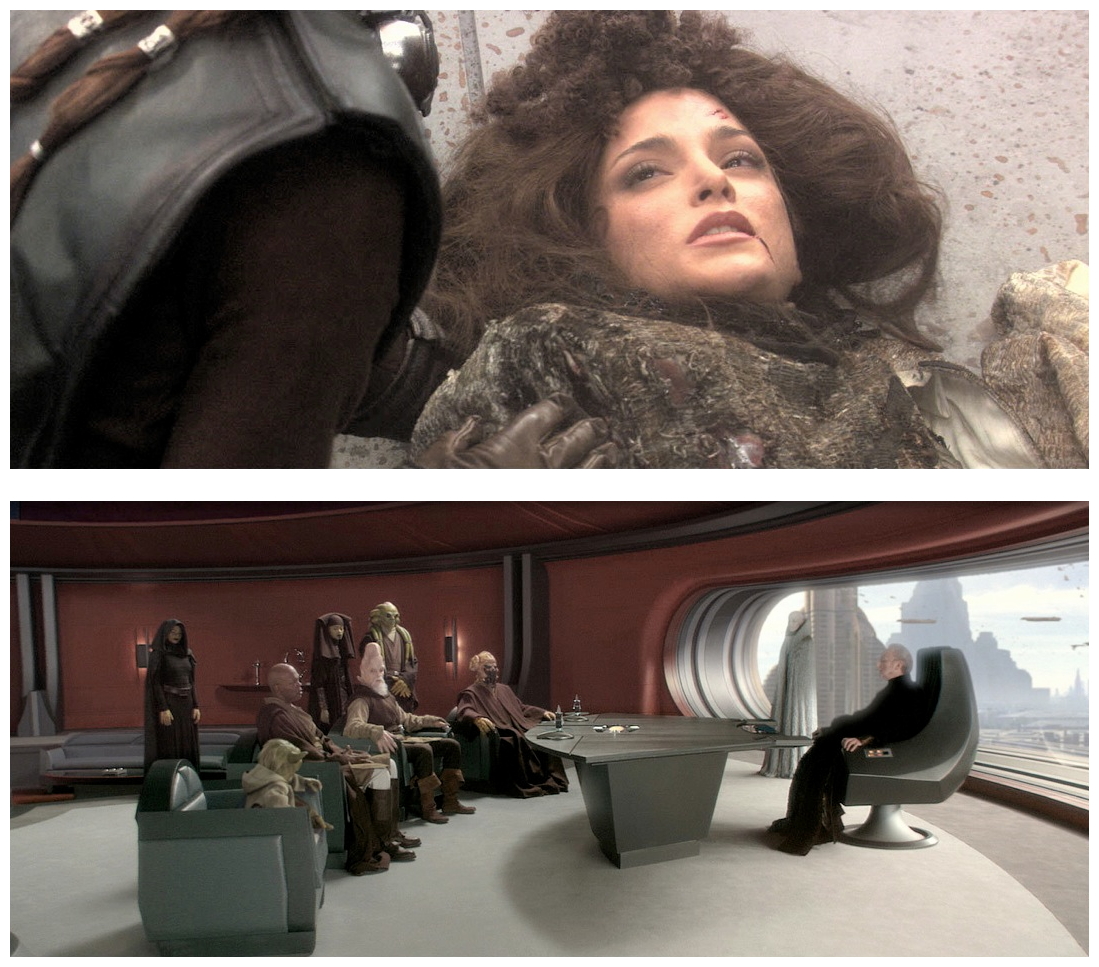 Despite contradicting itself on numerous occasions, the plot of Attack Of The Clones hangs together and builds intrigue throughout much of its running time. Whilst this might sound like faint praise, for most of us, the Star Wars films are basically James Bond movies in space. No one would compare Sean Connery‘s Bond to the lame-arse portrayals from Roger Moore or Timothy Dalton, right? Yet the franchise survives because the set-pieces are invariably so high on the ‘Gee Whiz’ factor it becomes almost irrelevant. Nobody would argue that it’s high art, but few could deny that Attack Of The Clones isn’t impressively realised and often visually staggering, even if the mind has plenty of time to wander when the cast earnestly pontificate about increasing unrest in the Senate, or partake in putrid pillow-talk. The public seem to understand this, as the box-office will testify. With a Star Wars movie, they’ll be privy to the state of the art of everything – picture, audio, effects and, on a number of occasions, their jaws will probably drop in awe. If it’s loud enough, who knows, they might even feel that same tingle on their necks that they experienced back in 1977, 1980 and (to a lesser extent) 1983. 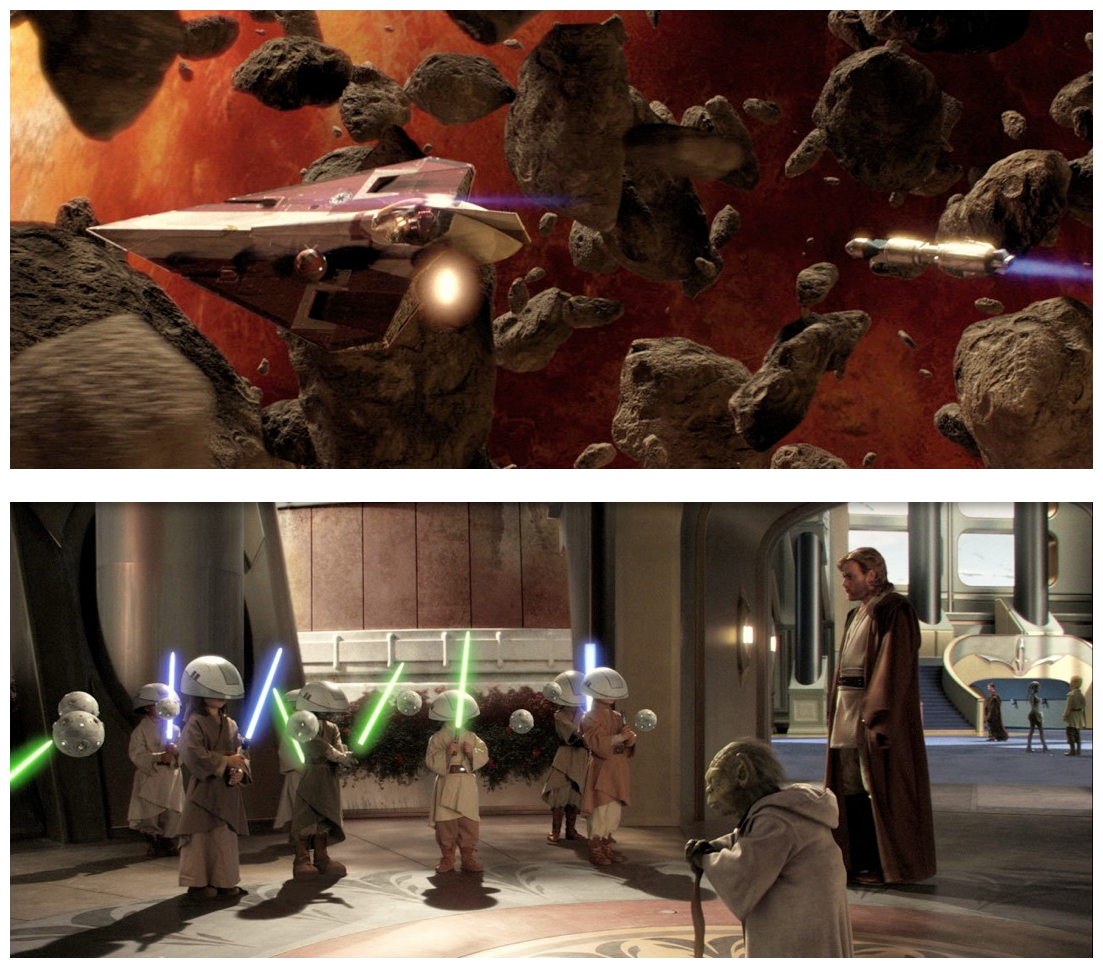 Taking place ten years after the Trade Federation’s invasion of Naboo, the Galactic Republic is threatened by the Separatists organised by former Jedi Master Count Dooku (Christopher Lee). Senator Amidala (Natalie Portman) arrives on Coruscant to vote on a motion to create an army to assist the Jedi against this threat. Narrowly avoiding an assassination attempt, she is placed under the protection of Jedi Knight Obi-Wan Kenobi (Ewan McGregor) and his apprentice Anakin Skywalker (Hayden Christensen). After the second attempt on her life, the two Jedi capture the assassin who is soon killed by her bounty-hunter boss before she can reveal his identity. Obi-Wan is assigned to find the bounty hunter, while Anakin is assigned to escort Amidala back to Naboo, where the pair become romantically involved. Obi-Wan’s investigation leads to the remote ocean planet Kamino where he discovers an army of clones being produced for the Republic, with bounty hunter Jango Fett (Temuera Morrison) serving as their genetic template. Jango is the bounty hunter Obi-Wan is searching for, and follows him and his clone son Boba (Daniel Logan) to the desert planet Geonosis. Meanwhile, Anakin dreams about his mother Shmi (Pernilla August) in pain and travels to Tatooine with Amidala to save her. They meet Anakin’s new step-father Cliegg Lars (Jack Thompson) and step-brother Owen Lars (Joel Edgerton), who tell Anakin that Shmi was abducted by Tusken Raiders and is probably dead. 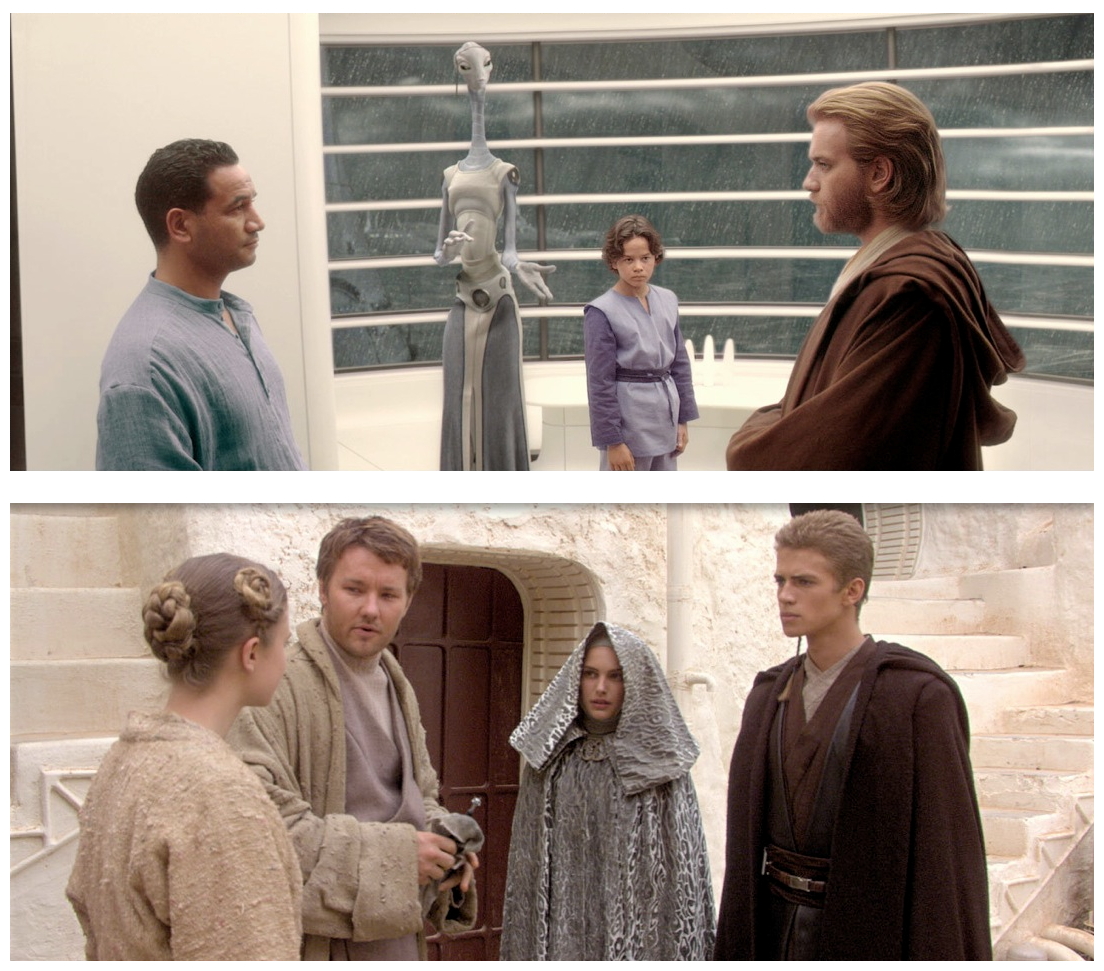 Anakin finds Shmi at the Tusken campsite, where she dies in his arms. Anakin then massacres the Tuskens and returns to the Lars homestead with Shmi’s body. On Geonosis, Obi-Wan discovers a Separatist gathering led by Count Dooku, who had authorised Amidala’s assassination and is developing a battle droid army for the Trade Federation. Obi-Wan relays his findings to the Jedi Council, but is captured mid-transmission. With knowledge of the droid army, Supreme Chancellor Palpatine (Ian McDiarmid) has little choice but to send the newly manufactured clones into battle against the droids. Anakin and Amidala attempt to rescue Obi-Wan but are captured instead, and all three are sentenced to death. They are saved in the nick of time by a battalion of clone troopers and Jedi Knights – including Mace Windu (Samuel L. Jackson) and Yoda (Frank Oz) – and Jango Fett is beheaded by Mace during the rescue. As the battle rages, Obi-Wan and Anakin intercept Dooku, who injures Obi-Wan and removes Anakin’s right arm, but Yoda arrives just in time to scare him off. Dooku escapes to deliver the blueprints for a new super-weapon to Darth Sidious and, on the eve of what is to become known as the Clone Wars, Anakin is fitted with a robotic right arm and secretly marries Amidala with C-3PO (Anthony Daniels) and R2-D2 (Kenny Baker) as witnesses. 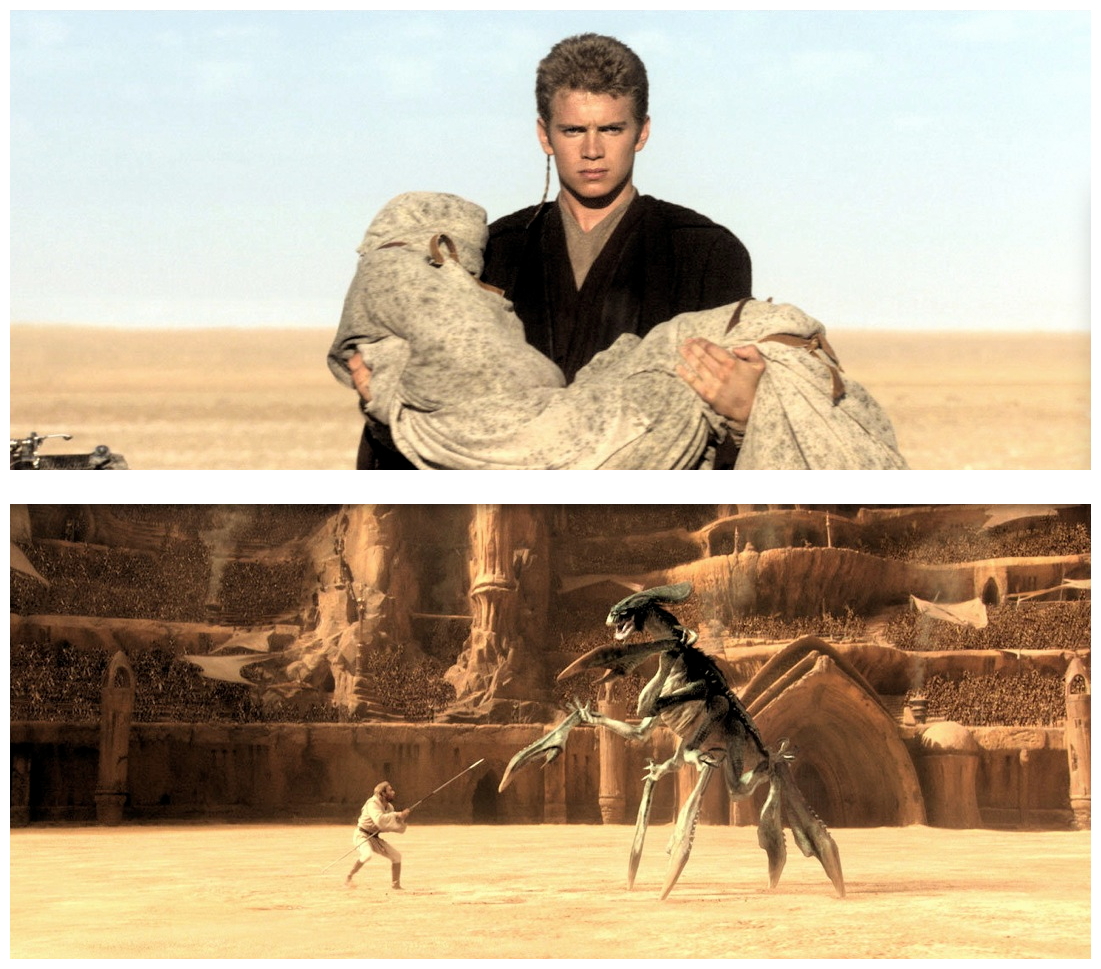 Attack Of The Clones was shot using a newly developed high definition video system and occasionally suffered from some serious grain on the cinema screen, particularly during darker scenes like the assassination attempt in Amidala’s bedroom. With no film print required for DVD (a direct digital transfer) there’s no problems. The images – whether brightly sunlit or atmospherically moody – look nothing short of superb. Attack Of The Clones does however highlight Lucas’ shortcomings as a filmmaker. Whilst he claims the previous films have imposed a certain style to the framing and angles he favours, the drama seems lazily covered at times with lots of slow zooms, but it clearly captures his strengths too. In terms of creating strange new worlds, clearly Lucas has got imagination to burn. Sure, It would be nice if he’d curb his enthusiasm for exotic creatures but, hey, what did Hasbro sign that contract for? Nuts? Okay, so the odd set-piece falls flat. The asteroid sequence, clearly an update of a similar sequence in Star Wars V The Empire Strikes Back (1980), is colourful but never really hits the heights of its predecessor. Maybe it’s just over too soon, but it fails to exhilarate possibly due to the choice to run without much musical accompaniment. 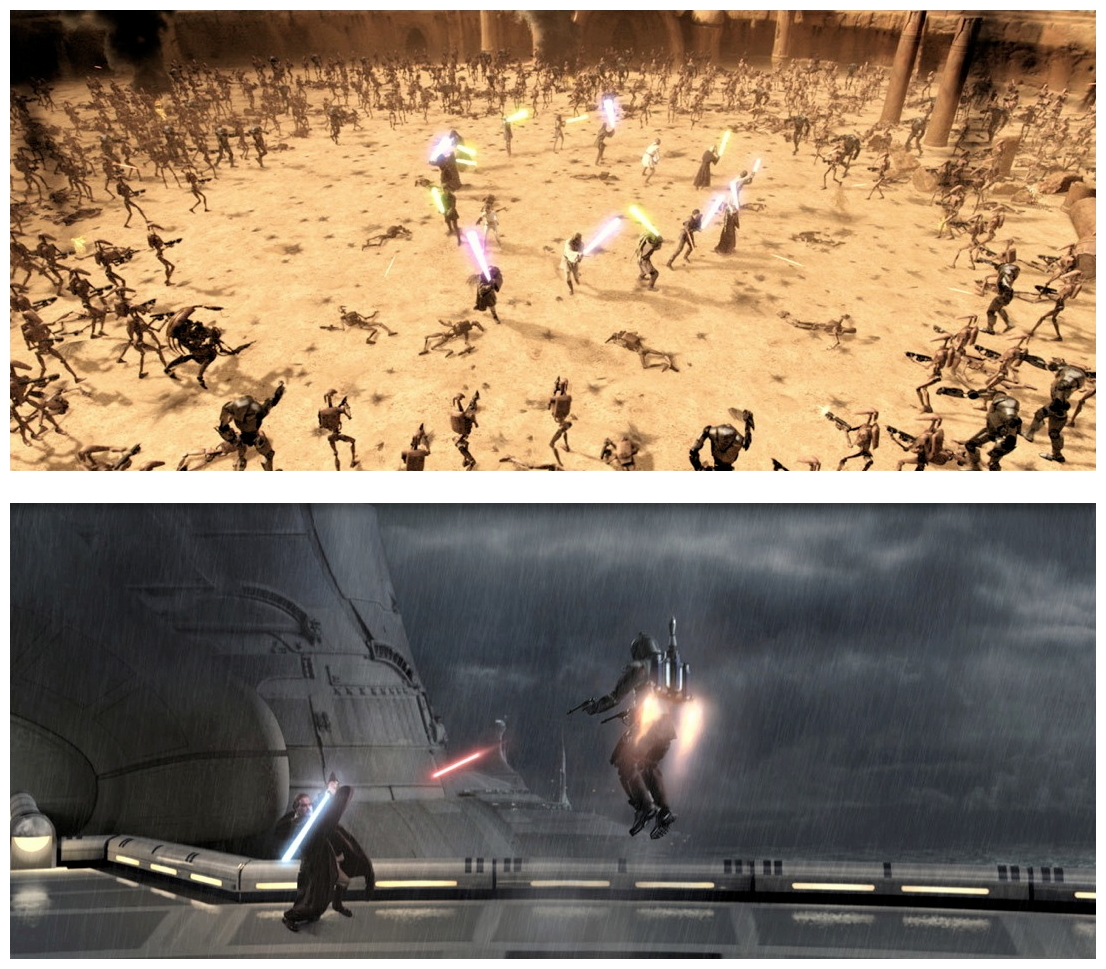 On the flip side of the coin, the conveyer belt sequence in the droid factory is brilliantly orchestrated and dizzying in a Tex Avery kind of way, but still curiously detached thanks to John Williams‘ generic music (was he scoring an unfinished sequence?). But the good stuff is pretty damn good. The opening, as it tracks the flight path of Amidala’s gleaming chrome ship approaching the mist-enshrouded Coruscant, is superb, gloriously understated but quietly awe-inspiring. In contrast, Obi-Wan’s and Jango Fett’s battle on the rainswept landing pad is in-your-face action and an absolute humdinger. The last forty minutes goes crazy, with Ray Harryhausen-inspired monsters, the drop-ship rescue, Jedi warriors in their prime – fun stuff indeed. Lucas saves the best for last though, when we witness Yoda’s prowess with a lightsaber. Whirling about like the Tasmanian Devil, Yoda dukes it out with Count Dooku in a sequence near-impossible to describe, let alone film, but Lucas pulls it off with hysterical aplomb. Eighty percent of the principal photography of Attack Of The Clones was shot at Sydney’s Fox Studios and Lucas speaks glowingly of his experience there. 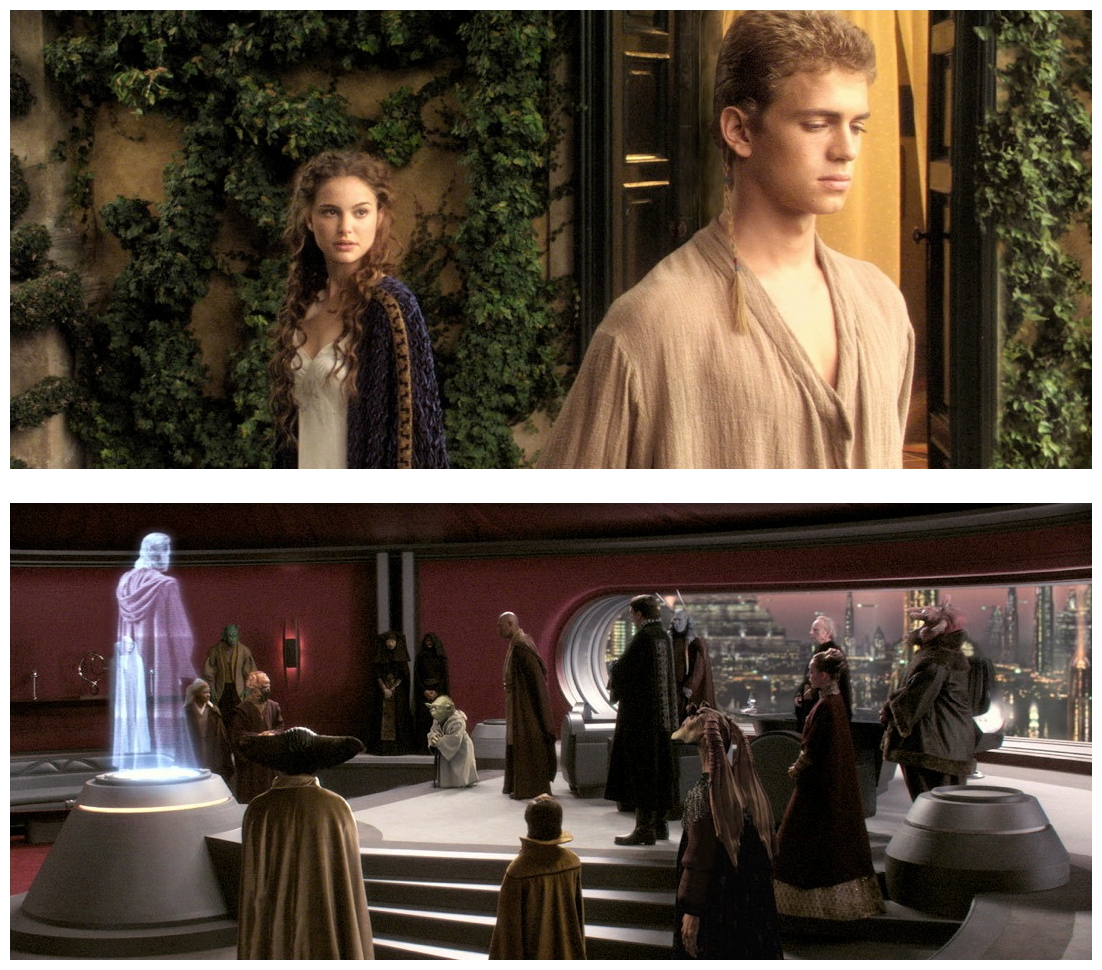 “I had a great cast (many of the supporting actors were Australian or New Zealanders) and a very efficient crew. We were stretching Sydney in terms of large set studio productions so we’ve helped to develop a whole vocabulary of talent and expertise in doing these kind of movies. I think it’s one of the best places in the world to film. There are many other projects I have in mind beyond Star Wars, so I plan to be bouncing between Sydney and here for some time to come.” In October of 2012, Lucas sold his production company Lucasfilm and with it the entire Star Wars franchise, to the Walt Disney company, who immediately announced a new trilogy of films. J.J. Abrams directed the first episode of the trilogy, Star Wars VII The Force Awakens (2014), then Rian Johnson was given the job of writing and directing its sequel Star Wars VIII The Last Jedi (2017), and he’s currently working hard on Star Wars IX (2019). It’s with this thought in mind I shall politely ask you to join me next week when I’ll have the opportunity to expose the very tenderest parts of your body to another awkwardly-probing journey through those damnable dank dells of Horrorwoodland for…Horror News! Toodles! 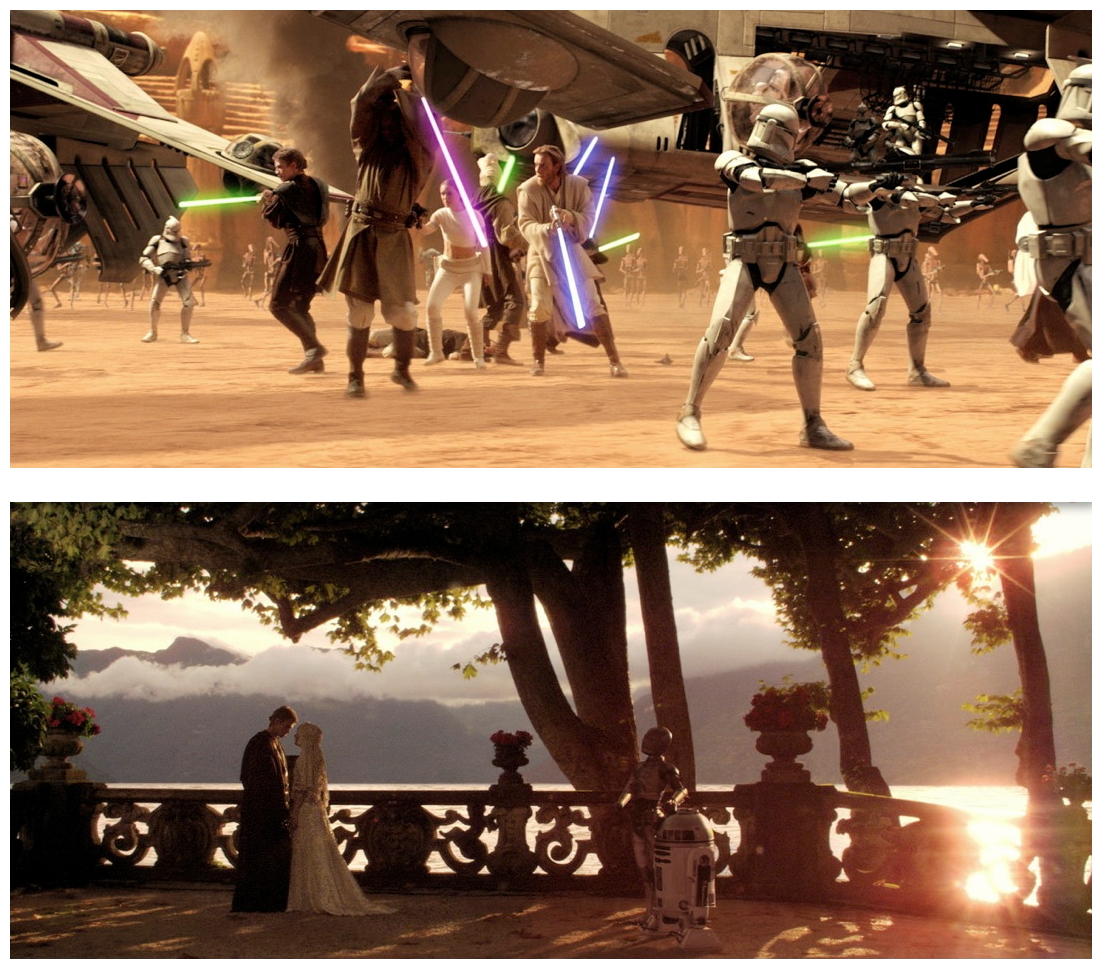