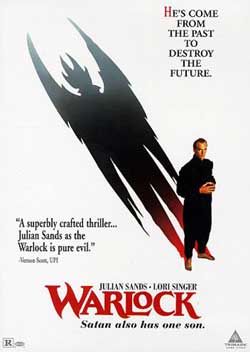 A warlock flees from the 17th to the 20th century, with a witch-hunter in hot pursuit.

The 1989 movie entry of “Warlock” put actor Julian Sands on the map with one of his most memorable (and my personal favorite) roles to date. Somewhat of a newcomer at the time, Sands might be remembered from a previous gig in the film “Gothic”. 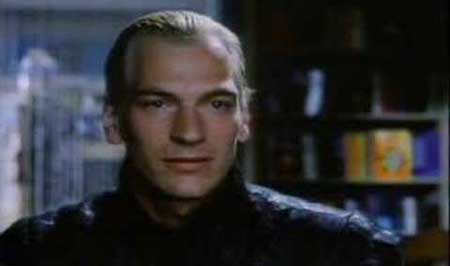 Those who embraced the performance of Sands in the 80’s would come to quickly recognize him as the driving force behind the Warlock character (his English accent flavoring his often well spoken vernacular. Julian went on to also star in its sequel “Warlock: The Armageddon” (of which I liked even better).

It was a new concept that simply worked, as a 17th century warlock manages to escape into the 20th century to inflict his old way powers onto modern man. In this case it would be actress Lori Singer who plays Kassandra. 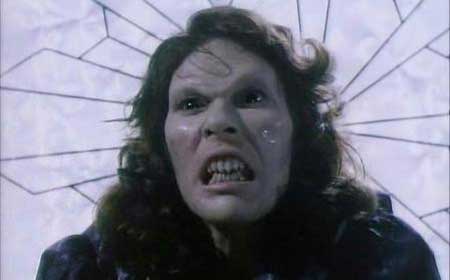 The film begins with the Warlock being sentenced to death in 1691 Boston, Massachusetts. He is rescued by Satan (called Lamael (spelling give or take) who propels him into the 20th century before execution. His assignment (if you may) is to gather up the 3 separated pages of an old book titled “The Grand Grimoire”. These pages have been spread out over the centuries but are still within grasp of a clever warlock. Upon assembly they will reveal God’s true name thus leading to the destruction of the world (called – re-creation). Warlock will receive the honor of being Satan’s Begotten son. 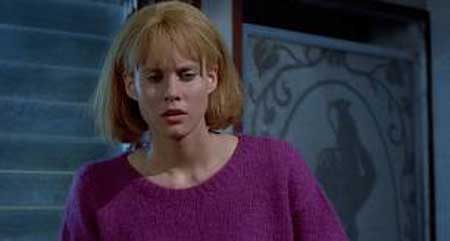 Warlock arrives in L.A. during the 1980’s and is soon taken in by Kassandra (he crashes into her living room). Kassandra is cursed with an aging spell when the Warlock believes her to have tricked him. But only after ripping out her roommates tongue and locating the first group of pages. 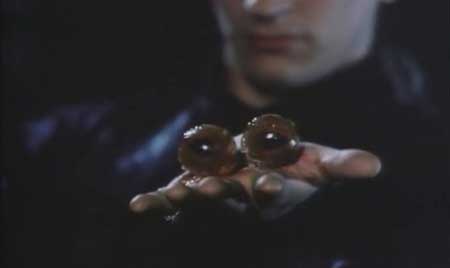 With the eyes of a fake psychic woman, the Warlock is able to use them as a Satanic compass to track each page down (this was provided when Satan possessed her body). He later acquires the power of flight by “acquiring” the fat of a young un-baptized boy.

Redferne, a hunter from the 17th century also manages to slip thru the portal enlisting Kassandra’s help in order to stop the Warlock before he releases the beast. She if forced to help or face dying within a few days due to old age. Redferne possesses a witch compass that helps in locating the warlock.

The film works on this pursuit storyline with the Warlock inflicting damage along the way. Since this film is more introductory, the warlock is driven to locating rather than inflicting evil at every moment. Though he does confront those who get in his way. In the sequel he becomes a bit more clever with his powers.

“Warlock” works as an action, horror, fiction film in the same sense of many which are focused on a 3rd act confrontation. In simple form, its good against evil, or good against the release of ultimate evil. 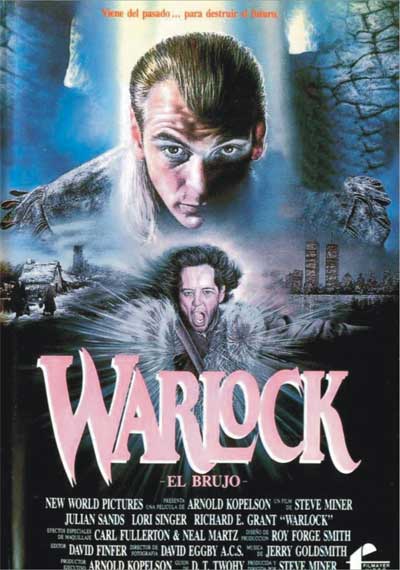 The film is surely dated as we witness Redferne hurry upon a commercial plane carrying a rather large weather vane weapon. Astute viewers will also note the allowed “smoking” and roomier accommodations. I didn’t realize these call outs at the time, but they indicate an era than is long past us in the days of post 911. Other dated aspects might stand out in the FX arena which still used overlay “conjuring blasts” and such.

The film was directed by Steve Miner and produced by Roger Corman. The release itself faired well on VHS but was shelved for 3 years on completion due to New World Pictures undergoing financial problems. It was then picked up by Trimark who grossed a modest return. 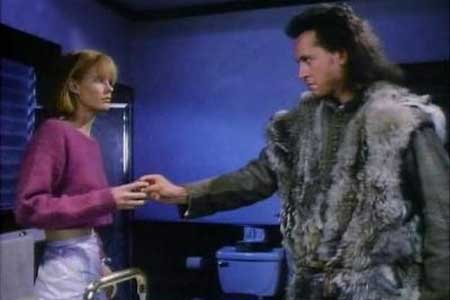 The movie has developed a sort of cult legacy over the years and has been often noted as a fan favorite. It’s follow up release was as equally entertaining, though Sands never reprised his role afterwards. It’s 3rd sequel is not even worth mention, even though it sat on BlockBuster shelves for years. 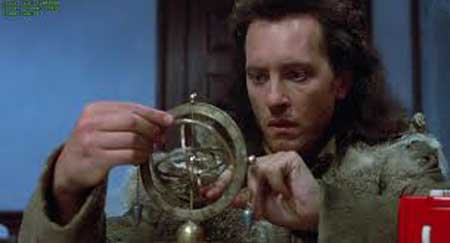 “Warlock” remains one of my favorites from that era always providing delight upon re-viewing.