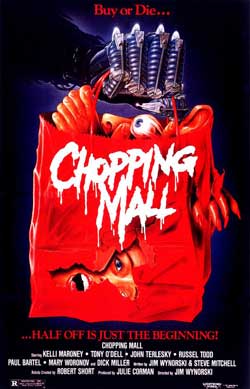 A group of young people decide to have an after- hours party in one of the stores at the local mall. Unfortunately for them, the mall has a new state-of-the art security system and it ends up locking all the doors, trapping them inside (it has a timer mechanism that won’t unlock the doors until the next day). To makes matter even worse, the new security robots patrolling the mall have all malfunctioned and have become homicidal. Will the group be able to survive the night or will they all be slaughtered by the out of control robots determined to kill anyone they come across?

When I was younger an old school Mom and Pop’s video store (which were staples during the 80’s before Ballbuster….uhhh, I mean Blockbuster Video put them out of business) opened up in my hometown. There were two movie posters in the window the day that it opened for business, one for White Water Summer and the other for Chopping Mall. I had never even heard of Chopping Mall (or Killbots, which is the alternative title) but after I saw the poster for it I knew that I had to see it as in my 12-year-old mind it looked absolutely awesome. After many failed attempts to rent it (it was always rented out by someone else at the video store) my mom and I were finally lucky enough to get our hands on it one Friday night, and I loved every single minute of it. I was happy to have the chance to watch it again recently, and while it is a lot cheesier than I remembered it being I still really dig it.

I have always been a fan of writer/director Jim Wynorski’s work, and I think that Chopping Mall is probably his best film. Yes, it is hokey as hell at times and there are some scenes that are almost too silly, but I don’t care. I think that it is just a fun 80’s cheese fest that has an original premise (it is almost like a demented version of Short Circuit), some pretty awesome death scenes (the bit where the chick’s head explodes is awesome), and the usual gang of stereotypes you are accustomed to seeing in your typical 1980’s horror flick. 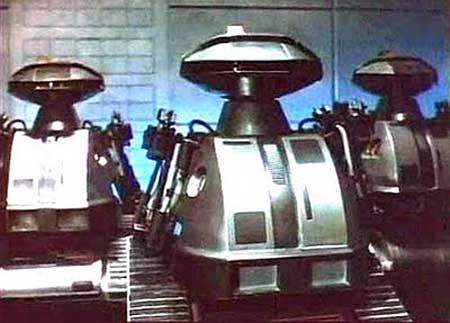 Factor in all of these elements and add some corny robot effects and over-the-top bad acting on behalf of most of the cast and you have a great little horror film that the whole family can enjoy. Plus the movie’s tagline (Where Shopping Can Cost You an Arm and A Leg)is one of the best taglines in the history of film in my opinion, right up there with the classic tagline from the 80’s slasher classic The Mutilator (which is By Pick. By Axe. By Sword. Bye Bye!). 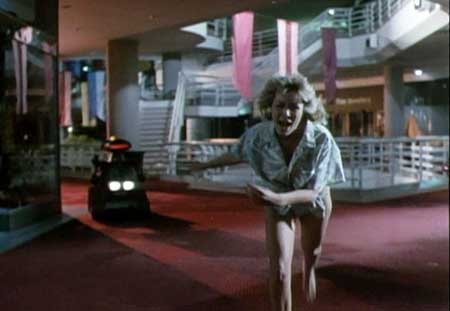 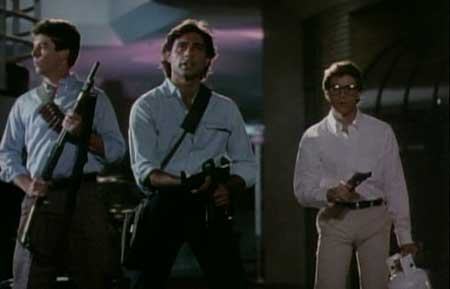 While I love this movie I will admit that the title is a little misleading. When I was a kid and saw the poster for it at the video store I thought that it was going to be a slasher flick full of blood, guts, decapitations, and scenes involving unsuspecting shoppers being chopped to pieces by some axe-toting madman, but I was totally wrong. Instead of some crazed, masked killer running around gleefully killing his victims we get three robots equipped with lasers (why do they have lasers again if they are supposed to just be mall security robots nabbing shoplifters, rowdy customers, and the like?) and other lethal weapons stalking (and taking out) our heroes. I guess what I am trying to say here is that there isn’t a whole lot of gore to enjoy, which is a bit disappointing. I mean come on the name of the movie is Chopping Mall for pity’s sake! With a name like that one would expect a lot of gory dismemberments and the like, but the reality is that there is not a single instance of any chopping going on in this film. 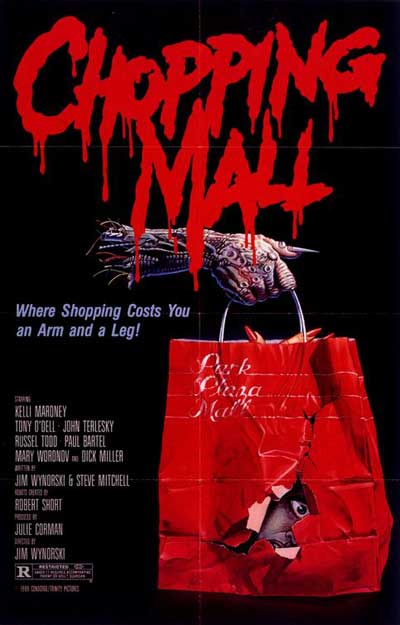 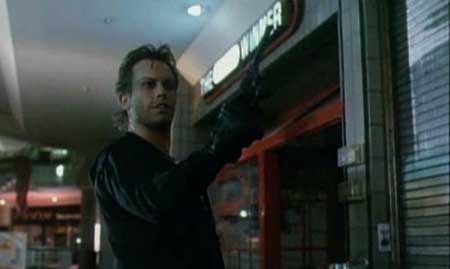 I always liked Chopping Mall. While it isn’t perfect and has some flaws it is also a very enjoyable and fun little movie. I think it is cool that the film makers decided to make robots the antagonists in the film as it makes for a different kind of 80’s horror movie. Don’t get me wrong, I love my slasher flicks, but seeing robots kill off horny teenagers for a change instead of some masked maniac was a nice change. It isn’t the best horror movie about a killer robot (that honor belongs to Deadly Friend, which to this day still scares the sh*t out of me for some reason) but it is pretty damn good. Check it out if you are in the mood for a horror film that serves up something a little bit different from the rest.