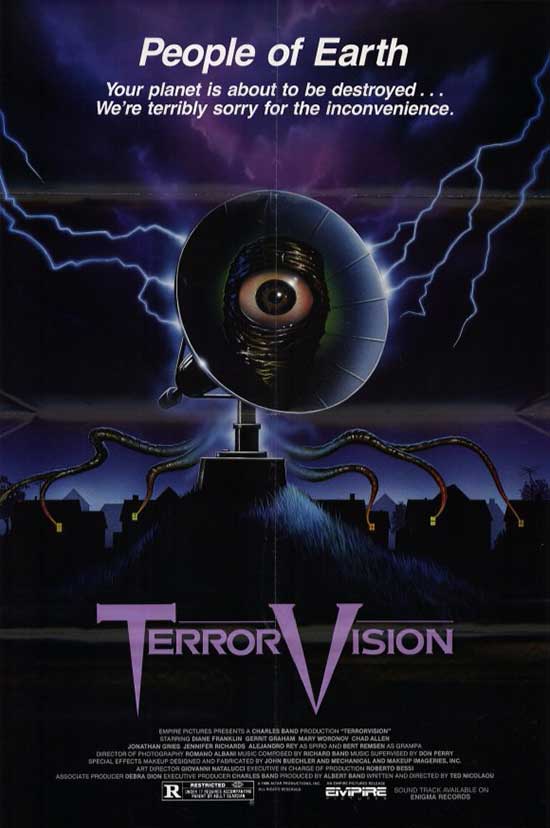 A carnivorous alien creature is accidentally beamed to a family’s house from space via their new satellite dish and goes about eating everyone in sight.

I remember watching TerrorVision when I was a kid with my cousin Marty on VHS one night back in the summer of 1986 (if memory serves me correctly, we also watched A Nightmare on Elm Street 2 and Savage Weekend the same night. I was creeped out by it at the time and made sure to turn off our satellite dish (one of those huge ones that were popular at the time that stuck out like a sore thumb in our backyard) before we went to bed that night so that the monster from the film didn’t show up and eat us (give me a break here, I was just 12 at the time and didn’t get that it was a horror comedy). I watched it again recently and must say that it actually holds up rather nicely (especially since I get that it isn’t supposed to be taken seriously now).

The premise is goofy but brilliant at the same time. We have an alien monster that is beamed to Earth that ends up in the oddball Putterman family’s house thanks to their satellite dish. Our main character is a young lad named Sherman (who is around the same age as I was when I first watched the movie) who knows the monster is lurking about, but no one believes him at first, of course. Eventually though, his sister and her boyfriend (who is the best character in the movie) discover he’s telling the truth and after attempting to turn the monster into a pet with disastrous results realize that they must destroy it. Of course, they reach out to the Elvira-like horror host Medusa for help, and wackiness (as well as bloody deaths) ensue. I know that the plot sounds more than a little kooky but believe me when I say that it works in its own weird way. I think that it is different and original, and there is definitely a message behind it about the way of life in America at the time (and maybe even more so today) if you pay attention. 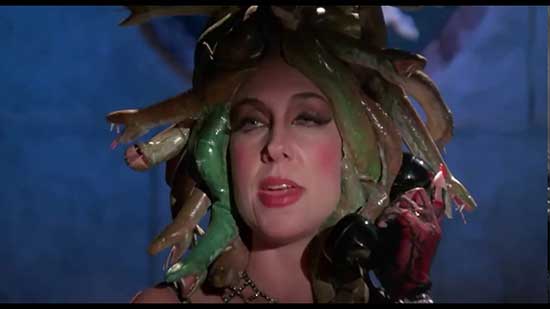 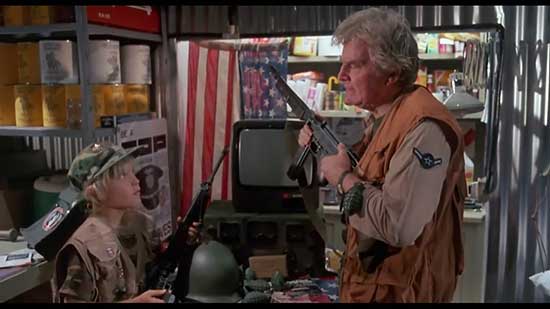 As I said earlier, the monster creeped me out when I was a kid. It is tough-looking and more than a little intimidating, and one of the things that really bothered me about it when I was a kid was the fact that it could mimic the voice (and appearance, somewhat) of the people that it ate. I think that this is a cool idea and I remember getting up to hit the bathroom in the middle of the night after watching it for the first time and my cousin waking up as well and asking what I was doing from the other room. 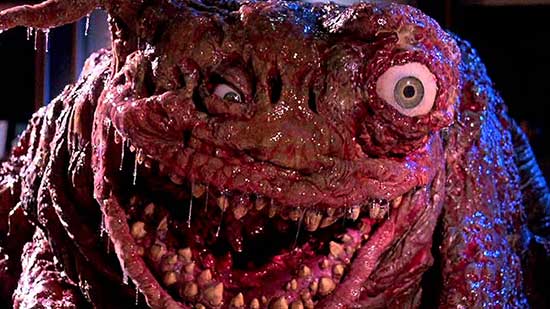 I couldn’t see him so in my paranoid, easily freaked out preteen mind I just knew it was actually the monster mimicking his voice after it ate him, and it was going to be coming for me next (what can I say? My imagination ran away from me A LOT when I was younger. Hell, it still does to this day). Thankfully though, it really was just Marty wondering what the hell I was doing and why I had woken him up and not the hungry satellite monster looking for his next meal. Still though, that monster is quite hardcore and even though TerrorVision is basically a comedy for the most part, he’s still pretty damn scary in my opinion. 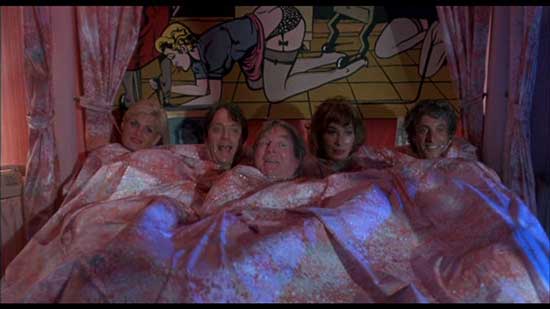 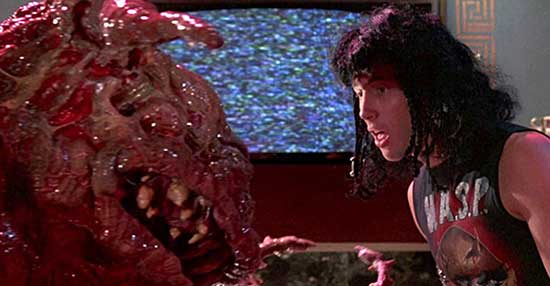 I love the cast as well. Horror film mainstays Gerrit Graham and Mary Woronov are awesome as Sherman’s parents (who enjoy swinging with other couples, something I couldn’t quite understand when I first saw the movie) and Bert Remsen rules as the oddball, shell shocked veteran Grandpa Futterman. 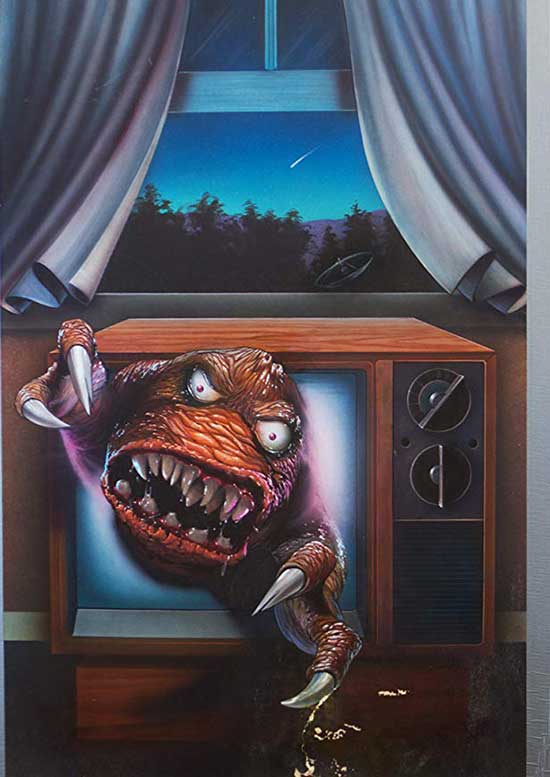 I really related to Chad Allen as Sherman when I was a kid and will admit that after watching the movie again recently that he does a very good job in the role. Jennifer Richards rocks as Medusa and does a great job channeling Elvira for her performance. My favorite performance though, was that of the always awesome John Gries as the stoner heavy metal rocker wannabe O.D. He is such a great character and you can tell that Gries had a field day playing the part. He owns every scene that he is in and is definitely one of the highlights of the film in general. 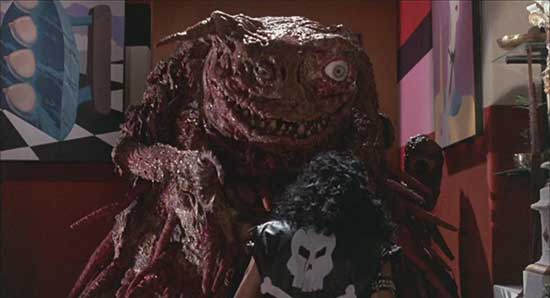 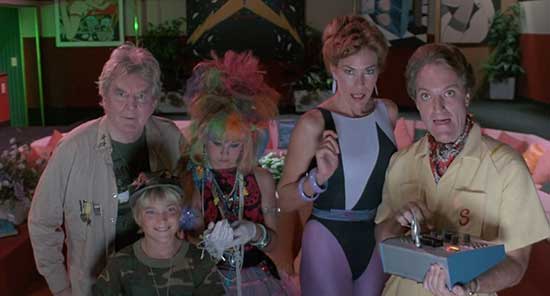 Even if it is a little cornier than I remember, I still dig TerrorVision and think it has a lot going for it. I think that it is cool that Albert, Charles, and Richard Band were all involved in making it and think it is even cooler that it has gained a following over the years and is quite popular with some horror fans. I love the fact that it ends on sort of a downer as it totally took me by surprise when I was a kid as I expected a happy ending and everything at the time. If you’re looking for something a little different do yourself a big favor and check it out, you won’t be let down.