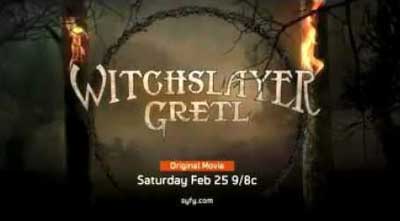 Twenty years after his encounter with the witch, a grown-up Hansel returns to the haunted forest, seeking revenge. But there’s a surprise waiting – his sister Gretel (who he thought had been killed) is the witch’s protégé.

QUICK FIX:
Young Hansel (HONsel?) is mortified to see his beloved sis Gretl stolen by an evil witch and is so bent on vengeance that he devotes his entire life to being a slayer of witches (and warlocks, so as not to be labeled sexist) and not since the days of Inigo Montoya questing for the six-fingered man that killed his father have we seen such a hate-fueled search for revenge!!! If only it were really that exciting. 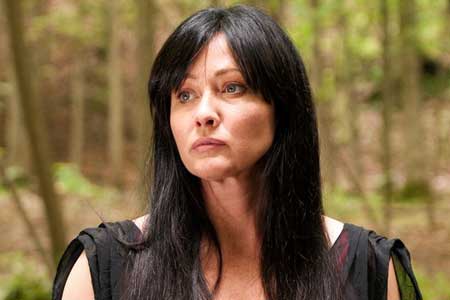 Anyways, this Queen Bitch Witch kidnaps gorgeous silicone-filled maidens all over the countryside who have the season of the witch in them, but just don’t know it yet. She can then cast a lil spell to keep them in check, do her EEEEEVIL bidding, and make herself more powerful. More powerful for what though, I really don’t know. Bragging rights, maybe? Able to kick a Warlock’s ass to prove women are the superior species, possibly? Give a hot chick an excuse to do nothing more than walk around in a slinky red gown and spout off horrible dialogue, DEFINITELY!!!! There’s more to this story, but by this point I really don’t give a sh*t.

Welcome to Part Deuce of the February 25th, 2012 SyFy Saturday Premiere Double Feature. I say “Deuce” because not only is it the 2nd of 2 that I’m reviewing of the dual premieres that night, but because sadly this happens to be the larger of the two when it comes to being, in the immortal words of Ian Malcolm, “One big pile of sh*t.” Even after sitting through BLACK FOREST and barely being able to contain ourselves from throwing food and rum bottles at the TV, Ally & I had a well-deserved smoke break (me, not her, she’s too young, DUH) and settled in for WITCHSLAYER GRETL.

I would estimate at around 16 minutes into this one, my ten year old daughter (who figured out the entire plot AND twists to BLACK FOREST before the first commercial break) looked at me with exhausted, disappointed eyes and said, “Daddy, I love you and I know you have to watch these to review, but I can only handle so much crap in one night. G’nite, you’re on your own.” And she hugged & kissed me and left me to suffer alone. I don’t blame her, honestly, but I was already in semi-drunken “this is a f*cking train wreck from hell and I can’t look away” mode and I was going to ride it out. As I told Big Bossman when I let him know I was reviewing these two for the site, “I take these bullets so you don’t have to.” I need a raise, dammit. 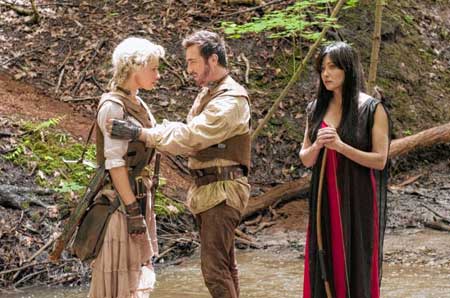 I knew the time was coming when SyFy would let me down after so many kickass giant creatures gone amok flicks in the last year, but suck me sideways, I didn’t think it’d be twice in one night. Need examples? Here’s but one of several:

If you’re going to do a period piece from the age of sorcery and D& D and other sh*t like that by all means bring on the magic, the spells, the enchanting, the scantily-clad hot chicks, the gargoyles, all of it. But for the love of cheese do NOT fall into the “There was no silverware in medieval times hence there is no silverware AT Medieval Times; would you like a refill on your Pepsi?” trap. Meaning sure, I’m not gonna think twice about communication over long distances through realm spells or magic birds or that kinda sh*t. But don’t show me witchslayers from waaaaay back then using Navy Seal style Bluetooth devices on their throats for that sorta thing and expect me not to poke major fun at it while laughing my f*cking ass off at the same time. Because I will…do both…a lot. Oh, and Hansel – Lt. Geordi LaForge called all the way from the U.S.S. Enterprise centuries in the future – he wants his super-duper-sight-enhancing goggles back. Pronto!!! 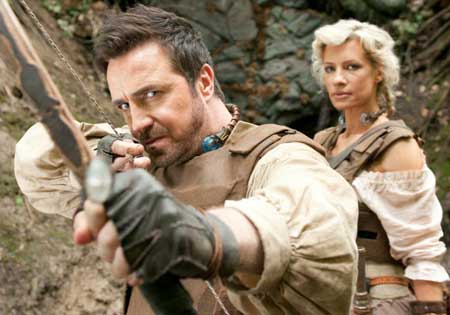 I don’t know what went wrong here – Brook Durham wowed me in the past with her script for SHOWDOWN AT AREA 51, and totally knocked it outta the park with RED: WEREWOLF HUNTER. Everyone has a bad day I guess, but this was horrible. I’m wondering though, if she’s not to blame. If, maybe in fact it could be the Director With No Name. I know I was pissed by the time I saw the opening credits of this, but I don’t remember seeing one on TV. I checked IMDB and there’s no Director listed there either. Same with SyFy’s site. Interesting, kinda conspiracy-ish, and explains a lot. Same as how my Dish Network guide listed this as WITCHSLAYER GRETL, but yet on IMDB it’s known as GRETL: WITCH HUNTER. Also found it on several sites after a Google search that listed it only as GRETL. Seriously, this makes my brain hurt.

So with three different titles to choose from, sh*t by any other name in this case is still known as Shit. Yet another concept that could have been really, really cool was thrown into the studio executive shredder and said shredder shat out this movie. ION Channel movie-of-the-week-style acting over insipid dialogue that alters back and forth between what would actually fit with the times and something from a modern horror flick, ridiculous plot holes big enough to fly the Millennium Falcon through, and the biggest sin of all to this CHARMED (that’s right, I said CHARMED) fan – underutilizing Shannen Doherty. Really? Seriously?? THIS is all you use her for??? Nameless Director, you should be ashamed, and make no mistake…someday I will find out who’s behind this because my rant is far from over. I was appalled by the ludicrousness from start to finish, pissed off to no end and am so very done with this movie. Easily the worst, most epically sh*tty SyFy premiere weekend since the days of THE LOST FUTURE or SCREAM OF THE BANSHEE.

Dear SyFy Channel:
Please get your sh*t together, and get it there yesterday. I’m running out of patience with you. CAMEL SPIDERS was your last good premiere and that was three months ago. Give me my STONEHENGE APOCALYPSE sequel or PIRANHACONDA and give them to me NOW or we’re breaking up for awhile.
Sincerely, Craig “The Ironfist” McGee.

P.S. I’m sending you the bill for a replacement TV. Thanks to your last premiere weekend, my flat screen now has an empty bottle of rum sticking out of it. It does make a nice coat rack now, but it’s not good for much else. Thank you. Oh, and get your sh*t together. That is all. 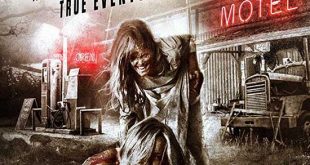