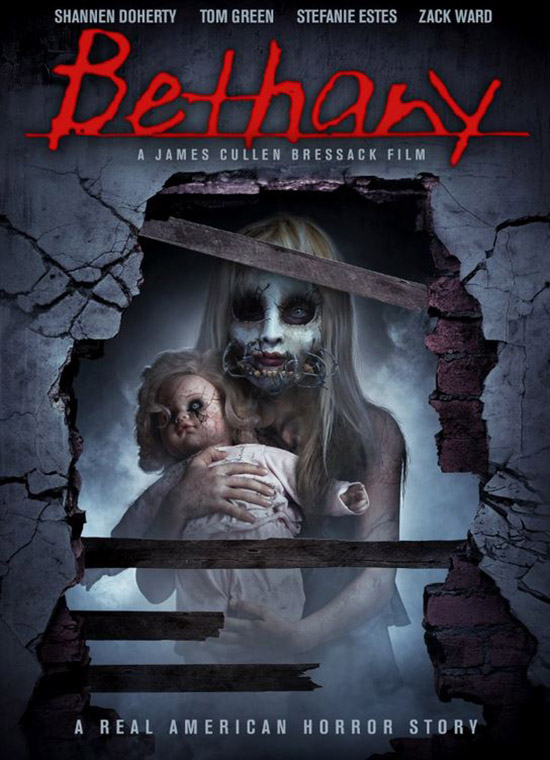 Claire and her husband find themselves moving back into Claire’s childhood home only to have the abusive and traumatic memories of her mother come back to haunt her. As her husband starts to get more work, Claire finds herself mixed up in a fog of past and present with a mysterious figure haunting her memories. What is this small figure that is trying to reach out to her, and what does it want?

If you could use just one word to describe Bethany, the new film from director James Cullen Bressack, that word would clearly have to be portentous. Every shot, every word, every glance, every beat, every scene—even every act of friendship and affection—is so pregnant with heavy, earnest, grim portent that the whole movie feels like a premature wake for someone who is just about to die.

Claire and Aaron have inherited Claire’s childhood home from her estranged mother (Shannon Doherty), a cold, unwelcoming woman who has left them a cold, unwelcoming house.  With much trepidation, Claire returns to the home that holds for her nothing but ghosts of sadness and emotional abuse…and perhaps some more traditional ghosts with somewhat more malicious intent. Hubby Aaron, meanwhile—in a feat of logical gymnastics that only a horror writer could love—seems to believe that the sprawling, well-kept house may be perfect for them, but would never fetch a decent price on the open market (come again?), because…well, just because. So, despite the psychological and emotional toll that coming home is clearly taking on Claire, the two of them must stay right where they are indefinitely and let come what may. Before long, it becomes clear—to Claire, at least—that it’s more than just bad memories haunting her in the big old house; and it may in fact be the childhood companion that she always thought was just imaginary:  Bethany. (Hey! That’s the name of the movie!)

At first blush, Bethany appears to be an interesting, slow-burning horror film, and it benefits from a number of creative shot compositions and transitions, especially in the early going. The cross-cutting between the modern scenes of domestic unease and what are essentially flashbacks to Claire’s childhood are often cleverly handled with interesting visual juxtapositions. The lead performances by Stephanie Estes (Claire) and Zack Ward (Aaron)—who also co-wrote the screenplay with James Cullen Bressack—are competent and occasionally interesting, though consistently infused with the same suffocating sense of ominous foreshadowing that drags at the rest of the film. And, well, there’s a creepy doll, too, and that’s never a bad thing.

Beyond that, though, much of Bethany finds itself on very shaky ground.

Though the quality of the visual storytelling tends to remain high throughout the film (until one positively disastrous special effects shot, that is), it quickly collides with some extremely heavy-handed scripting and the weight of a story so bloated with ominous portent that it can’t possibly pay off in the end. And sadly, it doesn’t.  Either Bethany is taking itself extremely seriously as a dramatic cultural artifact or the filmmakers don’t know how to effectively calibrate mood and atmosphere to push the viewer toward a satisfying conclusion.

It’s worth noting, though, that the primary creative force behind Bethany—co-writer, producer, and director James Cullen Bressack—is no rookie filmmaker. As of this writing, he boasts thirty-two directing credits, forty-nine producing credits, thirty-six writing credits, thirty-one acting credits, and literally dozens more! His filmography appears to be an ever-growing, ever-expanding living organism akin to The Blob or something straight out of the mind of Lovecraft. So, it is not a lack of filmmaking experience or ability that undermines Bethany, but rather a lack of creative urgency and emotional stakes.

Ultimately, the central figures in Bethany simply aren’t interesting enough or sympathetic enough to warrant the audience’s empathy or stress, and the film makes no sincere effort to raise the stakes or give the viewer a reason to really care. When things happen, they happen. Big deal.

For her part, Shannon Doherty delivers as the unfeeling, self-centered mother who wants to reclaim her youth and beauty by living life through her young daughter…and who ultimately values physical perfection above basic humanity. The same plaudits can’t be extended, however, to the other “headliner” in the cast: self-proclaimed funnyman Tom Green in a humorless role as a family friend and marriage counselor (I don’t think you’re supposed to be both) who inserts himself into the action at just the wrong time and doesn’t stick around long enough to regret it.

None of this is to suggest that there aren’t legitimate moments of hair-raising suspense or cringe-inducing violence. There are! And the final few minutes of the film do deliver some creepily effective images and one last, well-played mother-is-a-monster flashback.

But there are just as many, and more, moments of cringe-inducing plot laziness and disappointing character development and motivation; and despite the well-played disturbing imagery of Bethany’s final scenes, the perfunctory resolution raises so many questions about what came before that audience head-scratching turns quickly into audience head-pounding.