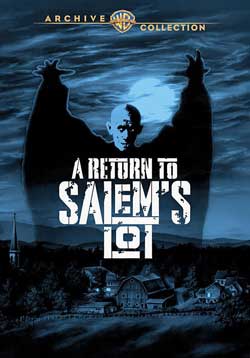 A man and his son vacation to the quiet vampire populated town of Salem’s Lot.

Hollywood has been doing a far better job with its sequels in recent years by maintaining production levels, story continuity and recasting actors. Audiences are given a better movie experience and Hollywood is rewarded with higher grosses, but this wasn’t always the case. Many poorly conducted sequels that feel like a different movie entirely, and are often worse offerings than the first, has been the norm for generations. “A Return to Salem’s Lot” as a sequel rates poorly but has merit in its own right. 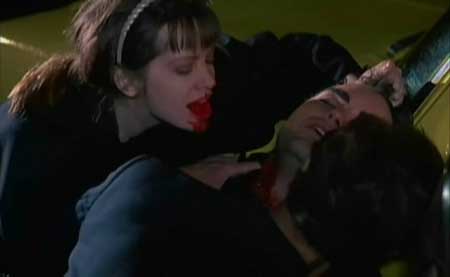 When a self important absentee father with a supposed heart of gold (Michael Moriarty) has his precocious, foul mouthed son unceremoniously dumped on him by his high society mother the father thinks it’s a good idea to take him back to the town where he grew up, Salem’s Lot. The dialogue between father and son in the beginning is fast and snarky which has a certain charm but once the story gets rolling Moriarty’s performance becomes lugubrious and the son becomes a hackneyed stereotype. Once in Salem’s Lot they try to fix up the house that used to belong to his aunt but they quickly find out that the entire town is populated with vampires. Instead of fleeing for their lives both father and son hang out for awhile as the resident vampires attempt to convince them that their lifestyle is a beneficial one and that they should join them. The vampires want the father, Joe, to write a ‘bible’ of all their lives and culture but use his son as leverage.

“A Return to Salem’s Lot” is far enough removed from its predecessor that its premise would have been better served to be further developed as a standalone movie. What was carried over from the original amounts to little more than the name of the town and vampires as there is no mention of any characters or events from the first. The story could have blossomed but was held back due to the lip service that was given to “Salem’s Lot” as many elements from the first were ignored entirely. Lucio Fulci’s “Zombie 2” was released with that name in order to capitalize on the success of “Dawn of the Dead” which was called “Zombie” in Europe, but is a movie that can stand upon its own merit. The same can be said for this sequel in that it’s a stronger movie on its own and since it eschewed the lore of Salem’s Lot, calling it a sequel has done more disservice than this movie deserves. 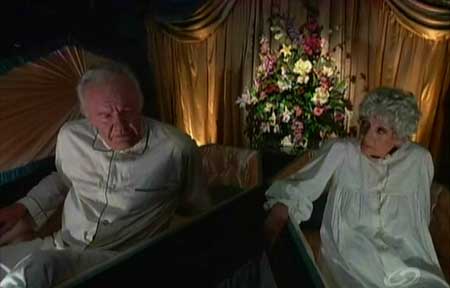 The most entertaining part of this movie is the inexplicable old man Van Meer who shows up looking for a lost friend but happens to know more about Salem’s Lot then he lets on. Van Meer comes out of nowhere, helps the father and son survive and won’t stop talking about the Nazis for some reason and the friend that he came to look for never actually materializes. 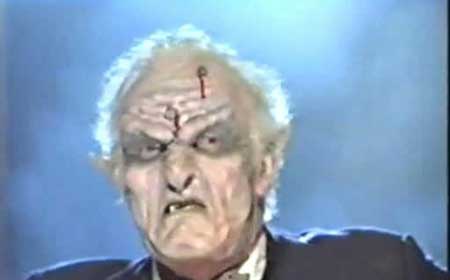 Though a seeming non sequitur he brings some welcome comic relief and has the best line in the movie. I’d tell you but it’s much better in context. Shockingly, Amanda, the little vampire girl who seduces the young Jeremy, is played by Tara Reid effectively making this a poor man’s “Firestarter.” Perhaps a little inconsistent, there is still quite a lot of entertainment in this film and not just from a few of the minor characters. This is not one to take too seriously and if you don’t hold it to being a sequel then there’s a good time to be had here.

The pace does start to lose energy as it nears the end like a runner pushes the last ounce of strength out to finish the race. The effort becomes sloppy and while not pretty, this runner does cross the finish line. All in all “A Return to Salem’s Lot” is a good yarn held back by virtue of being second.