In 1977 a group of young, horny, out of control Christians are spending a fun filled weekend at the Happy Day Bible Camp. Their impure antics rile up a sadistic crazy nun known as, “Sister Mary Chopper”. One by one these youthful sinners pay a BLOODY penance for their sinful acts. 7 years later, another group of Bible totin’ Christian wannabes return to the Happy Day Bible Camp. All ignore the warnings from the local folk of the grizzly murders that took place 7 years prior. Is Sister Mary Chopper dead or is she just waiting for backsliding Christians to commit sins of the unholy?

Making a successful horror/comedy is not an easy task. So it ends up being a rare surprise when one lands in your lap and turns out to be a twisted and perverted little masterpiece. “Bloody Bloody Bible Camp” is one of those rare gems, from the first line of muttered dialogue (“Jesus probably had a big penis.”), to the final freeze framed shot, that just flat out entertains the way a B-movie should. I had no clue when I started the film that it was going to be THIS good. It also didn’t hurt having one of my favorite personalities starring in it, Mr. Reggie Bannister. I met Reggie one time many years ago and he was one of the nicest guys you could ever meet. Being a HUGE “Phantasm” fan (I have a Tall Man tattoo), I love seeing him in anything. In a way, he was those films’ comic relief (at least to a small extent). In “BBBC”, he is able to fully exercise his comedic chops and the dude is funny. In fact, the entire cast was terrific and I have a feeling that it will end up being a much talked about cult classic.

The film opens in 1977 when a group of Christians are having a great time at the “Happy Day Bible Camp”. These kids are celebrating the Lord as well as drinking, smoking, and porking. This grabs the attention of the sadistic Sister Mary Chopper who wastes no time making mincemeat out of the young ones. Seven years later Father Richard Cummings (Reggie Bannister) and his group of Christian youths and counselors are on their way to the camp and plan on restoring it to its’ former glory. Once these kids begin to misbehave, Sister Mary Chopper returns and plans to send each and every sinner straight to hell in the most vicious manner possible.

“BBBW” is a throwback to the slasher flicks that most of us loved and grew up on in the 80’s. Not only does the film successfully pay homage them, it also manages to have an identity all its own. Come to think of it, it will also manage to offend many that watch it. Director Vito Trabucco (who also co-wrote the script with Shelby McIntire) does a terrific job at staging the lunacy and pacing the film just right. The film never dragged for me and I found myself laughing out loud quite often. There is some really funny dialogue that I found to be highly quotable. I can see it now, next time my wife tells me how great the sex was, I will respond with a deep breath and say “I gotta take a dump.”

The gore was pretty great. Many of the death scenes are highly memorable and bloody. The gore was almost entirely done old school which many of you will like to hear. There is an amazing head crushing scene that I had to rewind a few times to appreciate. The film was perfectly cast with the likes of the a fore mentioned Mr. Bannister as well as his wife GiGi. We get cameos from the director of the underrated film “Driftwood” Tim Sullivan, as well as Ron Jeremy as Jesus. The rest of the cast of up and comers were terrific. So I have to mention how great Ivet Corvea, Matthew Aidan, Jessica Sonneborn, Deborah Venegas, Christopher Raff, Jay Fields, Julianne Tura, Elissa Dowling, and the rest of the cast were. 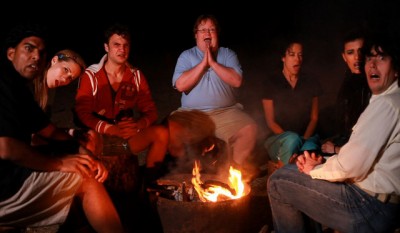 This film may be offensive to some, trash to others but for me, “Bloody Bloody Bible Camp” is B-movie bliss!! Hilarious dialogue, brutal gore, a catchy tune or two, and a bit of booby to go along with the infantile humor (that I love so much) will make it an instant cult classic. Hopefully the film becomes successful enough, there’s always room for a sequel. And someone should really consider releasing a Sister Mary Chopper mask, I want one!! ***** (out of 5). 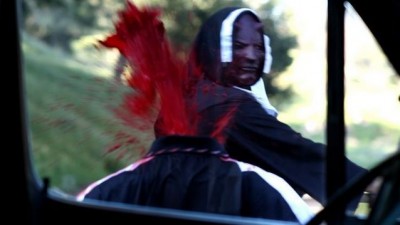