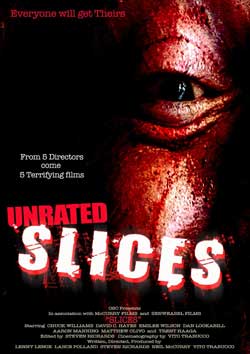 In the tradition of Creepshow, this macabre anthology features five short horror films, including “The Exterminator,” in which a ruthless businessman gets a taste of his own medicine — and then some — when he’s abducted by his own hatchet man. Other eerie tales include “Turnout,” “The Range,” “Night Scream” and “Dead Letters,” in which a grieving writer discovers a way to resurrect his beloved dead wife — but at what cost?

An insomniac channel surfs one night looking for something to help relax him and hopefully finally give him some rest, but instead he stumbles upon Prof. Lucius Phibes and his TALES OF THE MACABRE TV show, which sets up the excuse for five different filmmakers to offer up five, count ‘em FIVE, different tales of terror with the obligatory CREEPSHOW-ish wrap-around story, giving us everything from a “bring ‘em back undead or alive” type zombie western to a WRONG TURN-infused hiking trip gone haywire. How’d they hold up? Well, I’ve always felt it best to single each one out individually, so let’s take a look:

First up from writer/director Vito Trabucco, we have revenge/torture-centric tale, THE EXTERMINATOR, a futuristic story in which America’s population absolutely must be kept right at or below the 300 million mark; not a single person higher. I actually think this would have been a much cooler premise to explore in a feature had they had the dough to do so, as I would love to see the filmmakers run with that storyline to see other avenues of it touched on rather than just dipping straight into HOSTEL territory for the majority of its running time.

Next up, Steven Richards’ DEAD LETTERS, a story about an alcoholic author who can’t let go the memories of his dead wife, but who may just have a chance to relive the glory days with the arrival of a special package in the mail one day. This was an entertaining little story which reminded me very much of Stephen King’s short, THE WORD PROCESSOR OF THE GODS.

Third in line is Neil McCurry’s NIGHT SCREAMS, the vampire tale of the bunch. I have to say this one was my favorite of the five, not only because no matter how much vamps have been sanitized, sterilized, and bastardized in the TWILIGHT series, I still have a soft spot for them in my black little heart, but also because I felt it told the best story in the little time it had. And even though I had it figured out before the bleak end, it was still a nice ride and I had a good time with it.

Next up, Lance Polland’s THE RANGE, about some Confederate soldiers on the run, the law dogs after them, and those nasty zombies that always get in the way and mess things up. I really hope this segment was intended to be as funny as I thought it was watching it, as more than one scene reminded me of one of my favorite westerns of all time, BLAZING SADDLES.

Our headliner in this series of stories comes from Lenny Lenox. TURNOUT is the story of a couple and their friend out for a leisurely hike that encounter a deranged psychopath in the woods who abducts them one by one for his nefarious…well, what other reason do maniacs abduct hikers in the woods for?? Body count, of course.

And lest we forget, there is the wraparound segment featuring our Insomniac, whose unraveling mental state thanks to no sleep is slowly blurring the lines between reality and what he’s seeing unfold on the TV screen in front of him.

Also, guys (and some of you girls out there – you know who you are), stay with the flick through the end credits…it’s blatant, it’s gratuitous, and it’s wonderful.

So now, you may or may not be asking, that we’ve been through everything, is the sum as good as the total of its parts? Or however the hell that saying goes….anyway, I did enjoy some segments by far more than others, and I understand all too well how some days you just have to make the most of your budget, roll with the punches, have a little fun, and go for it. This wasn’t a bad movie, and I enjoyed it for what it is. Anthology lovers – it’s worth a look, as the CREEPSHOW vibe is definitely there, save for the big Hollywood names and much larger budget they had back in 1982. Aspiring filmmakers – you should watch this to see what can be accomplished with not a lot of cash to spare and still put out a product you can be proud to show to genre fans.