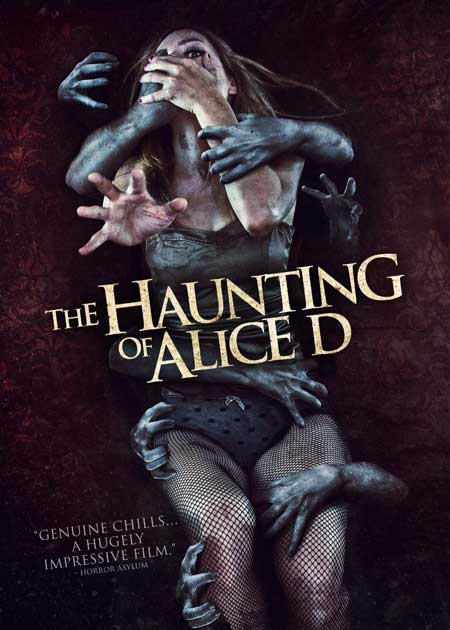 The spirit of a young woman that committed suicide after killing those responsible for forcing her into prostitution terrorizes a group of annoying partygoers.

I wanted to like The Haunting of Alice D. I really, really did. I thought that even though it sounded painfully unoriginally it still sounded like it could be a lot of fun so I went into it expecting it to at least be somewhat decent. Unfortunately that just wasn’t the case and I had a great deal of trouble making it all the way to the end without skipping ahead to the next scene more times than I could count. What could have been a cool little supernatural horror film about a mistreated spirit seeking revenge on the descendant (and his pals) of the person responsible for making her life a living hell quickly became a muddled, boring mess with unlikable characters and no scares whatsoever.  It’s pretty hard to screw up the whole “vengeful ghost killing off people” formula but somehow the people behind this film managed to do just that.

Without a doubt the biggest problem that I had with The Haunting of Alice D was the fact that it was just plain boring and nothing really that interesting ever happened. It takes forever for anything even remotely exciting to happen and when it finally does it is quite underwhelming. It is full of way too many scenes that go on for just way too long that feature characters just sitting around chit-chatting about things that I just really didn’t care anything about.  I’m all for the slow burn thing but only if there is some sort of payoff and sad to say, there really isn’t one when it comes to this movie.

We don’t really see a whole lot of Alice except for a glimpse here and there and to be honest she really doesn’t ever do anything worth mentioning when she is on camera. I was expecting her to show up and start ripping people in half or something but instead she just sort of pops up every now and then and does nothing more but stand there looking menacing with her mouth gaped open (which looked more goofy than frightening in my opinion). I kept waiting (and waiting) for her to do SOMETHING but she honestly never really does. She kills one couple off screen, freaks people out by making random objects move, and lurks in the shadows but beyond that we don’t really get much else out of her which is a shame because had she been handled properly she could have been quite awesome and maybe even a little bit creepy.

The other major issue I had with the movie was the lack of likable characters.  I’ve said it before and I’ll say it again, but if I don’t give a damn about any of the characters chances are I’m not going to like the movie that they appear in and nothing could be further from the truth in this instance. The only characters I could really tolerate were Jenny (Megan Hensley) and Michael (Aaron Massey) and there were even times that they got on my nerves to an extent (I thought that her whole back story was a little forced and it didn’t quite work for me). Neither one of them was anything special but both of them were nothing short of amazing compared to the rest of the characters that appeared in the film as they are all just a bunch of stereotypical douche bags and annoying cookie cutter prostitutes that I couldn’t wait to see die. While the biggest majority of them are beyond terrible I think that the worst of the worst was without a doubt Joe (Juan Riedinger) though Adam (Michael Reed) was a very close second.  Joe is one of those obnoxious assholish-type characters that you want to get brutally killed seconds after he first appears onscreen. He is without a doubt one of the worst characters I have seen in a movie in a very long time and every scene he is in is just horrible (honestly folks, if you can find a more annoying douche of a character than him than you have really accomplished something). Needless to say I had a lot of difficulty rooting for any of the characters that appeared in this movie and didn’t care about what happened to them. That is never a good sign.

I also felt that the ending was very rushed as well. We spend over half the movie setting things up and then the shit hits in the fan in about three minutes and the movie is over. As I said earlier there is really no payoff as nothing that fantastic ever takes place and to me it felt like the people behind it either ran out of ideas toward the end or just gave up completely. I was certain that something memorable was going to take place before everything was said and done but I was wrong. When the end credits started to roll I actually thought to myself Really? That’s it?!? and couldn’t help but shake my head in disbelief. The ending is that underwhelming (as is the entire film).

I didn’t think that The Haunting of Alice D was going to change my life or anything but I really did expect a little more from it. It suffers from pacing problems, unlikable characters, and a lot of other issues that kept me from enjoying it (not even brief appearances by Kane Hodder and Al Snow-who both look like they would much rather be somewhere else-could save it). To say that I was disappointed is an understatement and I think that a lot of other viewers out there will feel the exact same way if they take a chance on it. Check it out if it sounds like something you think that you might be into but trust me when I say that in the long run it really isn’t worth your time.