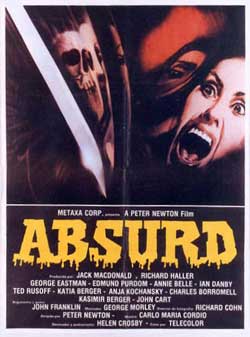 Priest comes to small town to help get rid of a monster whose blood coagulates very fast. This creates problems as the monster is very hard to kill and then decides to go on a killing spree of its own

Absurd is one of those horror films that use the premise of a hard to kill demon in human skin. The problem is that it is not actually a demon at all, simply a reference. It was banned by the BBFC (UK Film Commission) and I’m still confused as to why, maybe leaning toward the religious overtones of a priest chasing and in fact attempting to kill. Story wise though, the tale is interesting enough with a man whose blood coagulates very quickly, in turn allowing him to heal at an exorbitant rate. Therein lays the dilemma as this man is extremely hard to kill. 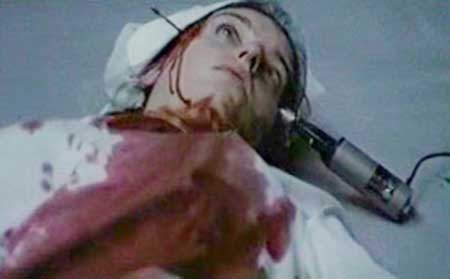 The tale begins with a winded priest chasing a man. When the man comes upon a gothic style gate with a spiny top, he attempts to climb over it. The priest catches him as he is leaning over the points and yanks down on the man’s legs, impelling him on the prongs. The man is found and taken to the hospital for his injuries.In one of the creepiest parts of the movie, during the gruesome stomach wound surgery, the doctor is busy using various instruments; hemostats, sutures and such; and the man opens his eyes and peers wickedly about. A shocked nurse notices and the doctor orders the administration of more anesthesia, assuming it was simply a nervous reaction. 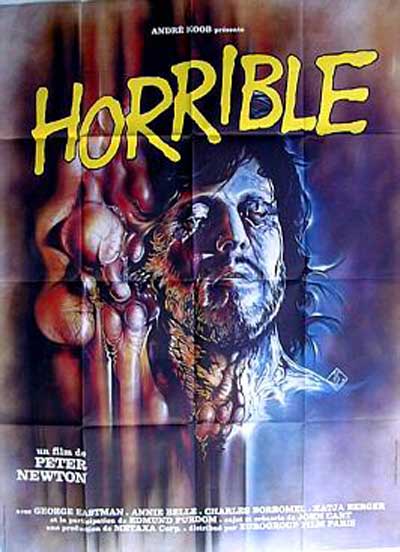 Meanwhile, a cop happens on the priest walking down a desolate highway and stops to ask for identification. The priest produces a passport and although the cop finds it odd, accepts it and offers a ride. During the ride the cop receives a call about the man being injured and goes with the priest to the hospital.

Back at the hospital following the operation, the doctor had noticed that the man was uncannily quick-healing and discusses it with a nurse, obviously bringing the audience up to speed with what the concept of the movie is about. With the doctor and nurse checking on the patient, the priest watches the patient through the recovery room doors. The man opens his wild eyes again, just as he had on the operating table and sees the priest. He tries to rise excitedly from the gurney, but the doctor and nurse hold him down and administer knock out drugs. The priest, no longer watching, traverses the hospital and draws the suspicion of the cop, who in turn begins to interrogate. The priest informs the cop that the killer was an insane subject in an unexplained experiment that had escaped and was thought to be shot dead according to a newspaper clipping he produces. But, the priest didn’t believe him dead and has been tracking and trying to destroy the killer ever since. 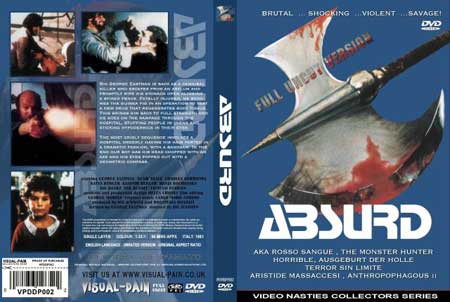 While a lone nurse is caring for the killer, he awakes, grabs her, and using a surgical drill, proceeds to bore completely through the nurse’s head. When her body is found, the cop is summoned and now believes the priest. The killer, having escaped from the hospital, makes his way, killing a hapless victim along the way, back to the house surrounded by the fence where he was initially impaled. In the home is a boy, his traction laden spinal conditioned sister, a nurse and their baby sitter. The nurse is the first to go, taking a sharp object through the head and out her forehead. The baby sitter is the next on the list, forced into a hot oven where her face bubbles. The boy, beating on the door and yelling for his sister to let him in draws the attention of the killer. When the boy can’t get in, he runs out of the house for help. The sister begins to remove various leather straps holding her immobile and miraculously is able to get up and stumble around when the killer breaks through the door. She stabs him in both eyes with a compass, (the type that draws circles), rendering the killer blind. The killer, attempting to follow the girl’s sounds, tries to get her unsuccessfully. In a rather exciting and suspenseful portion of the film, the girl, standing silent with her back in a corner a few feet from the searching killer is unfound and she scrambles away down a hall, the killer
chasing. 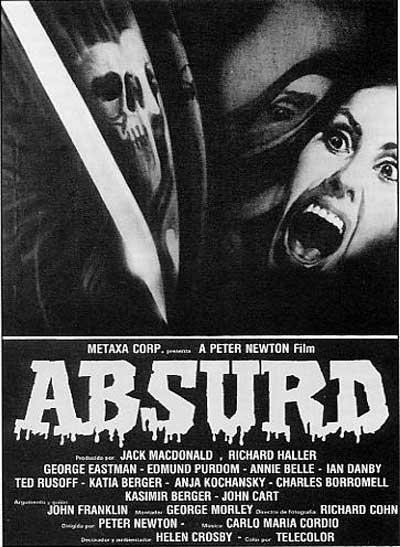 The priest, after finding the boy running down the road, is told of the events and goes to the house, ending up wrestling with the killer. Meanwhile, the girl takes a sword from a fallen suit of armor and begins to strike the killer. The last scene is somewhat shocking as the girl, covered in blood, enters a room where her little brother is and tells him that he doesn’t have to be afraid anymore. She then holds up the killer’s severed head. 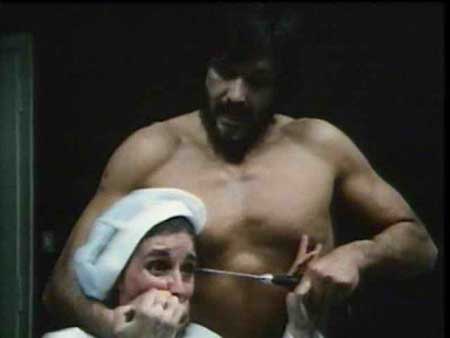 Quality wise, the film left a lot to be desired. It was chock full of a stuttering, and often blank spaced soundtrack, obviously due to bad dubbing, and included the actors mouthing off sync. Otherwise, the film does hold some gore merit, especially with a rather gruesome scene in which a butcher has his head split down the center in a band saw. For folks who enjoy obscure films.this one’s for you.