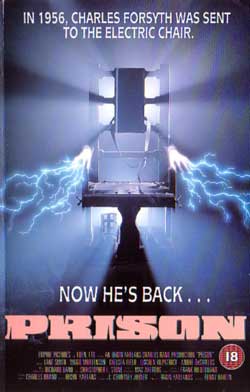 The evil spirit of an executed convict terrorizes (and kills) the prisoners and guards alike at the recently reopened prison where he was put to death years ago. Why is he killing everyone that he comes into contact with and how does the cruel (and mentally unstable) warden of the prison have ties to his past? Is he simply killing because he just gets a kick out of it or is he doing so as a way to avenge a wrong doing? If the mysterious and likable new prisoner Burke can’t get to the bottom of things and find a way to stop the spirit everyone is going to be handed a death sentence.

On paper Prison sounds completely and totally kick ass, doesn’t it? We have the ghost of an executed prisoner going around killing the hell out of everyone in a setting where no one can get away. I was looking forward to it as I figured I was in for some cool death scenes, tons of blood and guts, and just a fun movie in general. In short I was expecting this movie to be totally and completely awesome, so you can imagine how disappointed I was about halfway into it when I realized that it was pretty damn lame. How you can take a movie that has such potential to rule and turn it into a confusing, muddled snooze fest is beyond me. I wanted to like it, I really, really did as it had most of the tools necessary to make a great late 80’s horror film, but in the end I just didn’t like what I saw as it suffers from many problems that almost makes it unwatchable. It isn’t the worst horror film of the 1980’s, but I don’t think that there are many people out there (if any) who would say that it was their favorite from this decade (at least I haven’t run into anyone into horror who has made such a statement).

I think that one of the biggest issues that I took with the movie was the fact that it was just confusing. I don’t know if I drifted off from boredom during a key scene and missed something, but I had no idea what the story was between the warden, the evil spirit, and one of the older prisoners. The whole thing was a mess that made very little sense and I think that instead of trying to give the ghost some sort of half-assed back story that they should have just made him some evil, demented prick who just simply liked killing others. I also don’t know what the hell was up with Burke’s character either. He also has a connection to the killer and the others but it didn’t make a great deal of sense to me. Maybe I am just stupid and didn’t get it, but by the time the movie reached its very unimpressive and anticlimactic ending I was more confused than the time that I tried to figure out why people went to see movies that starred Nicholas Cage. 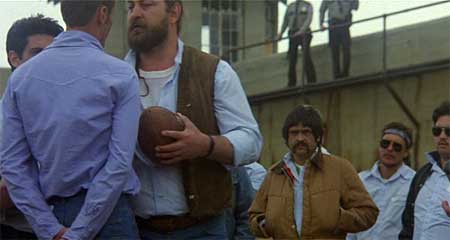 The characters are pretty damn bad too. We have Burke, played by Viggo Mortensen, who is kind of our main character. He is a good and heroic fellow (even though he is in prison) who has the personality of your average cheese grater and is more than what he seems (I think). Warden Sharpe is this annoying guy who likes to yell and scream at others when it isn’t appropriate and who has some sort of connection with the evil spirit (that is kind of explained at one point). We also get Chelsea Field in the role of Katherine who is pretty much only in the movie because the filmmakers felt like there should be at least one woman in it to keep it from being a total sausage fest.

She says pretty much the exact same thing in every scene (she keeps complaining to the warden and anyone else who will listen about the unsafe conditions at the prison) and adds absolutely nothing to the plot. There’s also your usual crew of stereotypical characters associated with movies set in a prison including a guy who wants people to call him Lasagna (I think he has a brother named Manicotti), the old, wise prisoner who is serving a life sentence and the others look up to, the asshole guard who abuses his authority and kicks the sh*t out of the prisoners when he gets the chance, and the big, tall, intimidating inmate who is actually a big softie until you piss him off (played by Tommy “Tiny” Lister before he went on to find fame and kick the sh*t out of Hulk Hogan not only in No Holds Barred but at the main event at SummerSlam ’89 as well). 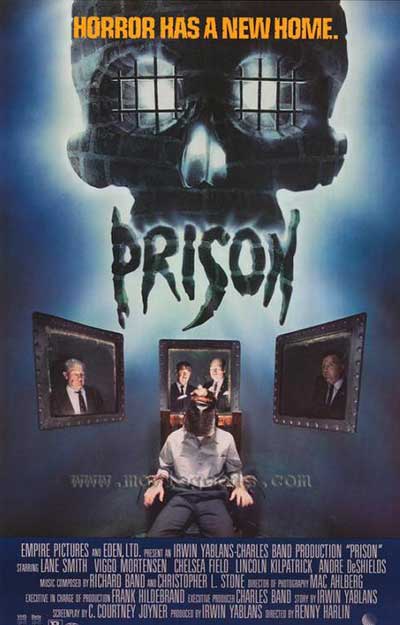 I really thought that I would like Prison, and if someone else had done it that most likely would have been the case. I personally found it to be boring, silly, and confusing, and the only positive thing I can say about it is that the first death scene (where the prisoner in solitary is caught on fire) is pretty impressive. I know that Kane Hodder did some stunts on this movie and was pretty much “discovered” as a result, but I am sure that he probably isn’t even a fan of the film. Check it out if you must, but keep in mind that I love pretty much every horror film that was produced in the 80’s and even I had a hard time getting through this one. 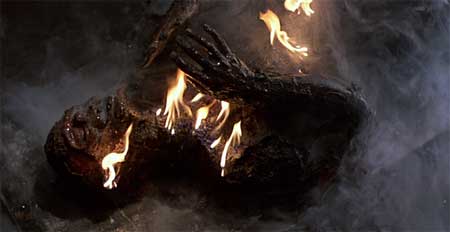