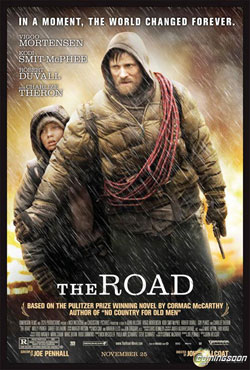 A father and his son walk alone through burned America. Nothing moves in the ravaged landscape save the ash on the wind and water. It is cold enough to crack stones, and, when the snow falls it is gray. The sky is dark. Their destination is the warmer south, although they don’t know what, if anything, awaits them there. They have nothing: just a pistol to defend themselves against the lawless cannibalistic bands that stalk the road, the clothes they are wearing, a rusting shopping cart of scavenged food–and each other.

Imagine if you will, you wake up and it all starts to fall apart. Not so much your marriage, job and emotional status…but your world you live in. “The Road” is one such film. We’ve seen our share of apocalyptic films over the years…most notably the Mad Max films or some combination of scifi cyberpunk re-telling…… this film is only a portion of that with no real highlights.

Directed by John Hillcoat, the Road sets out to slap its viewers with another round of….all leads to no-where tale. Our main characters are actor Viggo Mortensen and actor Kodi Smit-McPhee. The IMDB credits list them simply as “man” and “boy”. Not alot of thought on character names for even Charlize Theron is named “woman”. The story tells of a trek thru the end of the world. Through back story flashbacks we learn of how it progressed at least from 1 family’s perspective and how they eventually exhausted their resources forcing them to leave the confines of home. 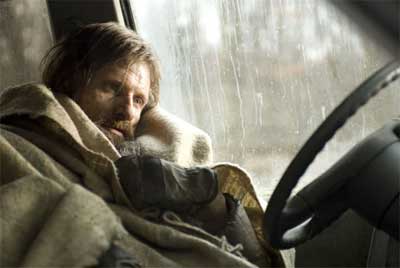 The mother tries for as long as she can before committing to a cold walk into icy death in the shadows of the night. A father and his boy set out to head south where the weather will be less brutal to them. Each day is a struggle for food, water, shelter and survival. The remaining have died, killed themselves, set out on there own or have grouped into mercenaries of some sort. Cannibalism has taken into effect only from the lack of food. No animals, no fresh food…all is covered in gray dust and debree.

Let’s face it…this was a depressing movie thru and thru. I think the director really wanted us to open our eyes to possibilities but as viewers the truth can be depressing when there is no real action applied to it. The effect and cause of the world’s end are never really mentioned. We just know that fire and elements took over. Earthquakes are more frequent and most of the trees are dead and dying. 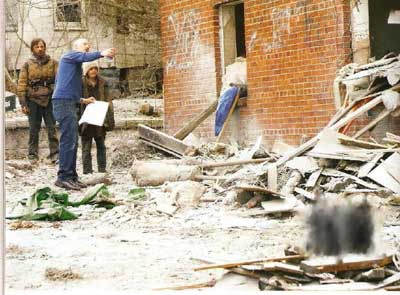 The movie survives on its ability to tell a dramatic tale as the man and boy struggle for means of survival. Points go for a gloomy backdrop of scenery and dismal surroundings. But not in the sense of a destroyed city but more the decay of the land and lack of real sunlight to produce fresh growth.

I looked into where the filmmakers shot their sets and most seems to originate from Pennsylvania areas and abandoned turnpike locations. MT Saint Helens was used for those who were wondering….. which is apparent in some of the main scenic scenes. Though this tells me that maybe Penn. is not the place I want to be living anytime soon. In the film the old man they meet protests “I knew this was coming. They were warning us.” which makes you stop and think about the state of things at current. Is the visions of filmmakers just a reflection of what we all anticipate? Does it end with a bang or simply a fizze. If it were “The Road”, a fizzle is exactly what is intended. Viggo gives a great performance as a caring determined father. It’s a shame that the material provided little in direction for the performance to really be highlighted. 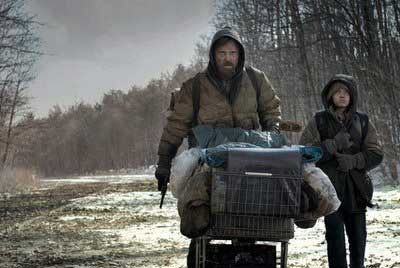 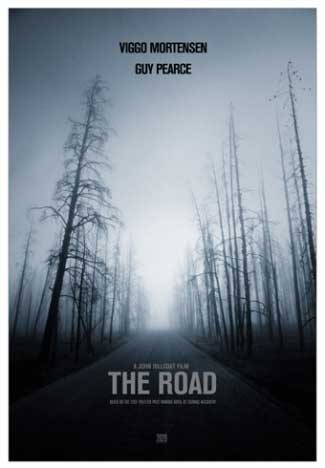 The Road sets out to slap a bit of realism intto viewers. A bit of the here’s where it could all go. Not extravagant, not dynamic…but cold, gray and lonely. The last who walk think of survival or death. A constant struggle day to day where you can’t trust anyone any more than the next person. The Road has no Hollywood ending, no high impact visual dynamics….just a story and a stage of current affairs. While I did have high hopes for this, the movie excels only on drama and heart felt material. It fails on providing any real direction or closure. In the end, the road really leads to nowhere as a film and a metaphor.