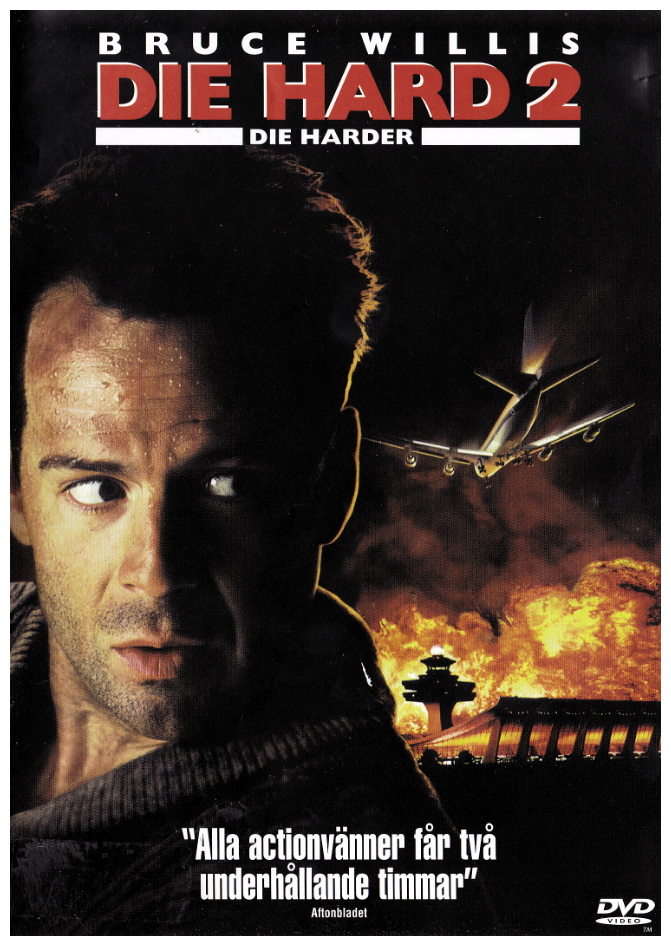 “John McClane, the New York cop who took on single handed some men who took over the office building where his wife worked a year ago, is now at Dulles Airport waiting for his wife to arrive so they can spend Christmas with her family. But it turns out that a South American President who became a drug dealer after the US withdrew support, is arriving to be handed to American authorities. McClane notices some men acting strangely so he follows them and they start shooting at him and he shoots back. McClane tries to talk to the Chief of the Airport police but the guy doesn’t want to listen, so McClane gets the fingerprints of the man he killed and has his friend at the LAPD check it out. And he finds out that the man officially died two years ago. So McClane thinks the guy is part of a Black Op and tries to tell the Manager but before they could act on it, the Airport’s system goes out. And that’s when someone calls them and tells them that they’ve taken control of their system so they can’t contact any of the planes who are arriving and give them landing instructions. And some of the planes have little fuel and among them is the one McClane’s wife is on. McClane tries to stop them.” (Courtesy IMDB)

Given the plethora of Die Hard (1988) wannabes that have dogged cinema screens and video stores in the quarter-century since John McTiernan‘s original ripsnorter first appeared, Renny Harlin‘s ruthlessly efficient sequel is actually starting to look better now than it did when it was first released. If that sounds like faint praise, well, it shouldn’t. Die Hard 2 Die Harder (1990) moves at a fair clip, certainly enough to satisfy most action fans – McTiernan was meant to direct, but was still busy making The Hunt For Red October (1990) when pre-production began. While not nearly as much fun or as stylish as its predecessor – the action sometimes seems gratuitously sadistic and Alan Rickman’s campy villain is sorely missed – this extravagantly produced film is a perfect no-brainer. Based on the novel 58 Minutes by Walter Wager, it seems unlikely that smirking Bruce Willis could not have put in a lazier, more self-satisfied performance if he tried, but somehow it works anyway (if he was paid US$5 million for the first film, just imagine what he was getting this time around).

Content to cruise around with his tiny mouth pursed into that eternally beatific smile, it’s hard to believe that even terrorists could spoil this guy’s day. In Die Hard 2 his cockiness almost approaches Frank Sinatra‘s in terms of its sheer magnitude, but isn’t that the paradoxical magic of Willis? Somehow, the less he does, the better he gets. Twelve months after the Nakatomi Tower incident, John McClane (Bruce Willis) is at Washington Dulles airport waiting for his wife Holly (Bonnie Bedelia) to arrive from Los Angeles. Richard Thornburg (William Atherton), the dickless reporter who exposed Holly to danger a year before, happens to be in the same plane. McClane spots two suspicious-looking men carrying a package, one of whom has a gun, and follows them into the baggage area. After a shootout, he kills one while the other escapes. Learning the dead man is a mercenary, McClane reports to airport police Captain Lorenzo (Dennis Franz), but Lorenzo gives an endless tirade about why they can’t just close down the airport (a disbelieving McClane asks, “What sets off the metal detectors first? The lead in your ass or the shit in your brains?”)

While it clearly isn’t Harold Pinter, the screenplay by Steven DeSouza and Doug Richardson sets up its situations with apparent ease and admirable economy). Former US special forces Colonel Stuart (William Sadler) and his unit set up base in a nearby church, take over the air traffic control systems, cut communications to the planes and seize control of the airport. They intend to rescue General Esperanza (Franco Nero), a dictator drug lord who is being extradited to the USA to stand trial on drug trafficking charges. They demand a plane so they can escape to another country, and warn the authorities not to try to restore control. McClane prepares to fight the terrorists and befriends a janitor named Marvin (Tom Bower) to gain access to the airport. Stuart’s henchmen ambush and kill a SWAT team at a checkpoint, then McClane kills the henchmen, so Stuart crashes one of the planes, killing hundreds.

If you think Dennis Franz‘s character seems to be a necessarily thankless part, it pales when compared to poor old William Atherton, reprising his role as the dickless television reporter Richard Thornburg. Probably best known for his near-identical role in Ghostbusters (1984), Atherton actually started out with sympathetic roles once, appearing in films like Steven Spielberg‘s mini-masterpiece The Sugarland Express (1974) and John Schlesinger‘s Day Of The Locust (1975). But for reasons unknown, Atherton has schlepped his way throughout the eighties and nineties playing officious bastards. What a shame. Though it hardly qualifies as a must-have, this always serviceable sequel is like a practiced old prostitute – shows little love but pushes all the right buttons without a second thought. The special features on the DVD I viewed included an entertaining commentary from director Renny Harlin, who even managed to make the Driven (2001) commentary sound interesting.

A featurette called The Making Of Die Hard 2 Die Harder, and four deleted scenes: An extended version of the scene when McClane enters the terminal, featuring shots of a children’s choir singing Christmas carols (the audio of the choir singing still remains in the final cut, but only heard in the background), A scene of two of the terrorists killing off two painters and stealing their truck as well as their uniforms (to pose as painters later in the Skywalk SWAT team ambush scene). An extended version of the scene where McClane first meets up with Marvin the janitor, and finally an extended scene of Marvin showing McClane the best way to access the tunnels to get to the runways, which includes a scene where McClane has to walk carefully across a narrow beam over a hot boiler. Interviews And Profiles features Renny Harlin interspersed with movie footage and a villain profile.

Behind The Scenes shows the crew at work on two stunt-intensive sequences as well as storyboard comparisons. Visual Effects breaks down the components of the ejection seat and airport runway sequences before digitised assembly into the final scene. McClane’s exploits spawned three sequels, all featuring Bruce Willis and terrorists: John McTiernan returned to the director’s chair for Die Hard With A Vengeance (1995), and Live Free Or Die Hard (2007) was made by Underworld (2003) director Len Wiseman, but that’s another story for another time. Right now I’ll make my fond farewells, but please be sure to return next week with a stout heart, an iron stomach and a titanium bladder for another head-melting romp through the garden of unearthly delights known as…Horror News! Toodles! 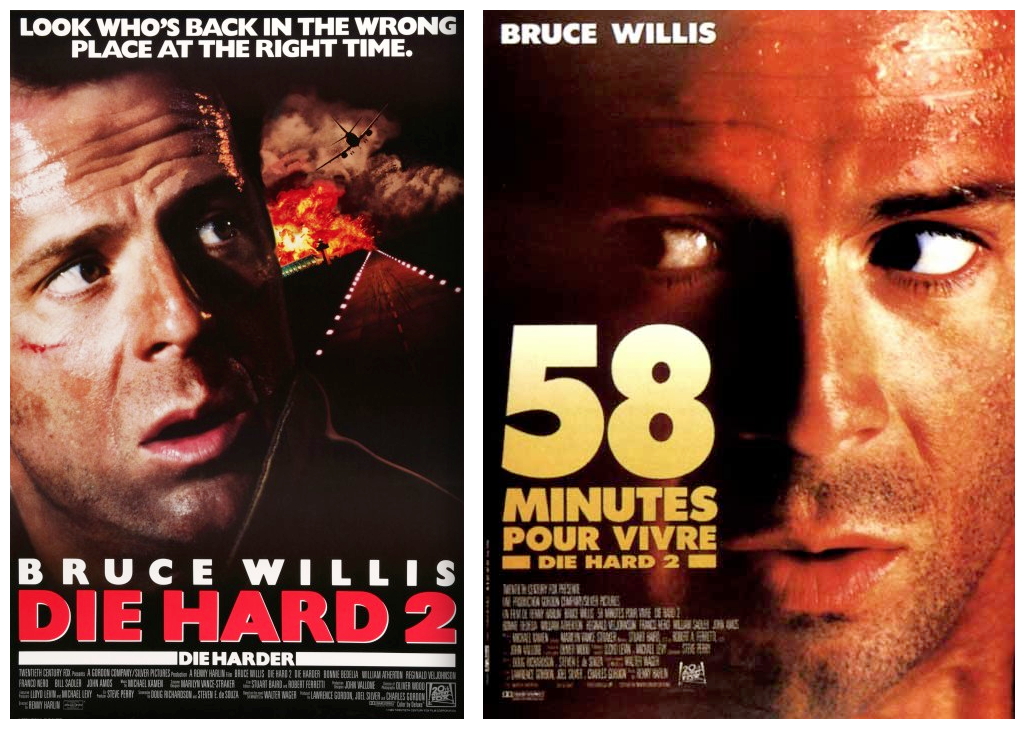