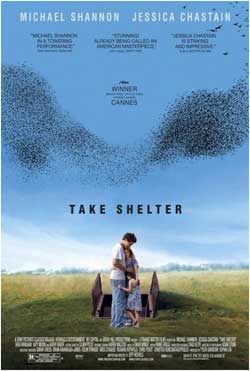 Plagued by a series of apocalyptic visions, a young husband and father questions whether to shelter his family from a coming storm, or from himself.

It’s not a big surprise to start seeing more films based around apocalyptic videos. In fact, you might say we are in the heart of the storm when it comes to historical time periods for this sort of thing. Because I take a great interest in such matters, AND the fact that I also grew up in Ohio (its film locale) “Take Shelter” was on my “must see” list.

The movie is being called a haunting psychological thriller. It taps into a familiar sense that many have already started to acknowledge. They speak about such phenomena on real radio shows like “Coast to Coast”, and seemingly tend to revisit the subject every month or so. I call this sense, a form of internal astuteness. It’s that calling that brews from within almost like you’ve been handpicked by “destiny” itself. 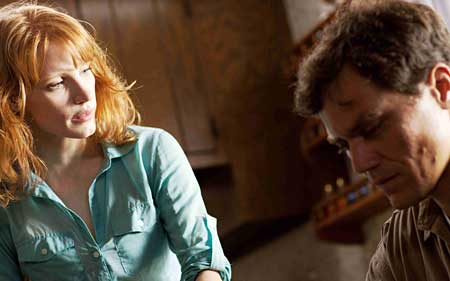 Michael Shannon plays the role of Curtis LaForche. Curtis is a typical hardworking family man. His lifestyle is very reflective of the middle working class who spends the day doing hard labor while relaxing at home during the evening. No, not the modern family who Tweets during the day, attends marketing meetings, and contemplates the future of Internet. Curtis is an Ohio blue collar construction worker. He occasionally indulges in an after work beer with friends while remembering to be respectful to his lovely wife at home.

The film is perfectly set within the Ohio country setting which is privy to seasonal storms amongst the common lifestyle of non-sensationalistic simple folk. Curtis is having visions, nightmares, and the occasional daymare hallucinations. His friends are beginning to worry, while Curtis thinks he may be going insane. Keeping much of this to himself, he seeks out medical help in an effort to subdue the craziness he is enduring. The nightmares keep him tired during the day which is getting in the way of his job. Though much in the same sense of one who is “called”, Curtis begins to make adjustments to his life.

These adjustments that might seem in excess are probably a great model for our culture which assumes everything will be ok ALL of the time. Curtis recognizes the storm cellar in his backyard, one of which provides a starting point for instinct.

It starts with stocking up on can goods and eventually leads to the $7,000 purchase of a storage hull that will be used to extend his storm cellar. As he digs up the yard, his wife and friends can’t help but question his sanity and reasoning. I believe this same instinct was felt by Noah as he began to build his Ark. Much in this same sense, Curtis begins to feel the weight of his community coming down on him for his actions.

Curtis begins to see the signs. Birds migrate in weird patterns, freak storms are presented that don’t exist and a wave of chaos begins to reveal itself in an prophecy like fashion. The reality of these hallucinations begin to stress his marriage with his wife Samantha. Though within their relationship, a loving connection keeps them strong which is seen in Samantha’s reaction to the whole deal. They persevere, make adjustments and unite in staying strong whether its getting Curtis help to just satisfying his curiosities.

The movie keeps things in perspective and never attempts to astound or overdue its simple nature. It plants its seeds that go further than the film itself, which is what I think the directors intentions were from the beginning.

“Take Shelter” has a message whether felt strongly or just hinted at. It was apparent to me that the director Jeff Nichols also shared this “sense”, hence the motive for this script and story. 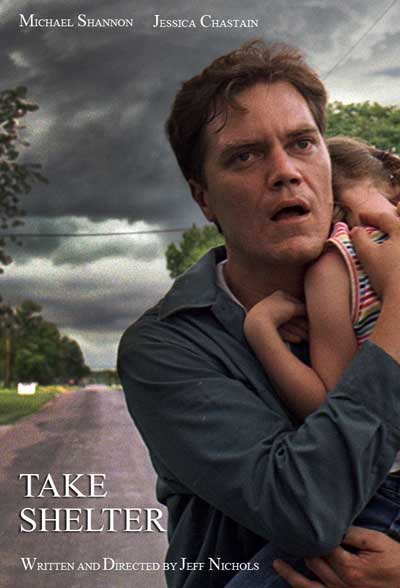 I want to recommend this film for its honesty about those who relish in their instincts on things not yet happening. While it all may seems silly at the time, it wont when the predictions come to light. This is a movie for 2012 if any I’ve seen!