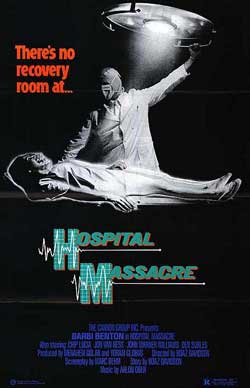 When Susan was a little girl a mentally unstable boy gave her a valentine card. When he sees her laughing at it he snaps and kills one of her friends. Nineteen years later Susan is grown and has an appointment at a hospital with her doctor to pick up a medical report. Unfortunately for her the boy that she laughed at is at the hospital as well, and he still hasn’t gotten over the fact that she made fun of him so long ago. He goes on a killing spree at the hospital, knocking off anyone he comes across as he makes his way to Susan so that he can make her pay for her actions all those years ago.

Hospital Massacre (aka X-Ray) was one of the few 1980’s slasher flicks that had eluded me for years so I was very happy when I received a copy of it to review. I had heard of it years ago and thought that it sounded pretty badass, and when I finally got the chance to see it my expectations for it were pretty damn high. Fortunately I wasn’t disappointed with it and I can happily say that it is an awesome little flick. I enjoyed every minute of it and I guarantee that slasher fans (and horror fans in general) will absolutely love it as well. 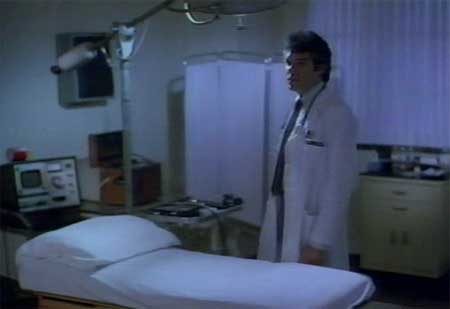 I love movies that revolve around the main character having to deal with some horrible event from his or her past, and that is exactly what takes place in this film. The opening scene is awesome and just genuinely creepy thanks to Billy Jayne’s performance as Harry who is one crazy and creepy little bastard. Ever see a kid get impaled on a hat rack because he was making fun of someone’s valentine card? You will here, and it is a pretty effective scene and a great way to start a movie! 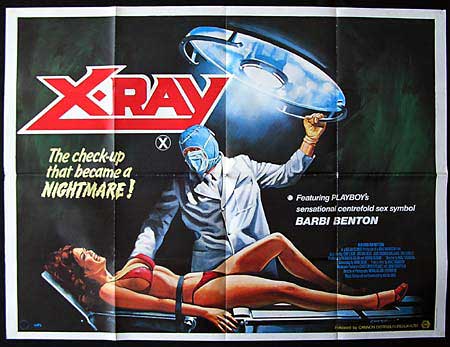 I also enjoyed the fact that Susan (and the viewer) doesn’t know what the adult Harry looks like so he could potentially be anyone that she interacts with at the hospital. It adds a little mystery to the mix as when we see Harry killing someone he is wearing surgery clothes (including a surgical mask over his face) so we can’t see what he looks like. It isn’t exactly the hardest mystery in the world to figure out as we get a huge clue early on in the movie after Susan arrives at the hospital, but I still like the fact that the filmmakers decided to include an element of mystery to the film as it makes it more enjoyable. 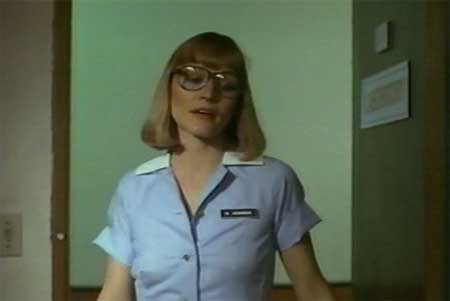 There are some pretty cool death scenes that kept me satisfied as well. We get the kid impaled under the chin on the hat rack, some hard core stabbings, an acid bath, a decapitation, and someone getting set on fire and falling to his death. There is also a weird scene that features Harry running down the hall with a sheet that he uses to smother a nurse with that I liked for some unknown reason even though it is a little cheesy. There was just something about seeing him standing at the end of the hall holding the sheet over his head that I thought was effective (and a little bit creepy). There definitely isn’t a lack of cool death scenes in this movie and I couldn’t have been happier as a result. 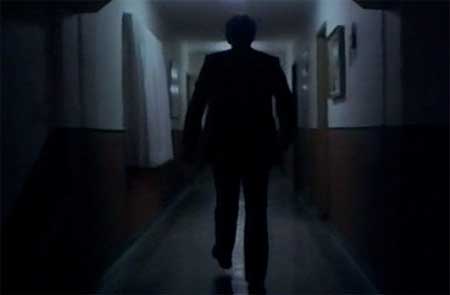 The only problem that I had with the movie was the fact that I didn’t really care for most of the characters other than Susan (played by Barbi Benton, who is a real hottie). The entire hospital staff is made up of total assholes and they treat Susan horribly. At first they are just rude as hell to her and then they basically refuse to let her leave and are physically abusive (they strap her to a bed at one point) toward her. What kind of hospital has nurses that physically restrain you and doctors that get pissed off because they have to help a new patient? I know I wouldn’t want to be treated at this hospital as it is more like an insane asylum than a regular hospital (and what was up with all those crazy old women crammed in the room with Susan? I thought that it was just very weird). 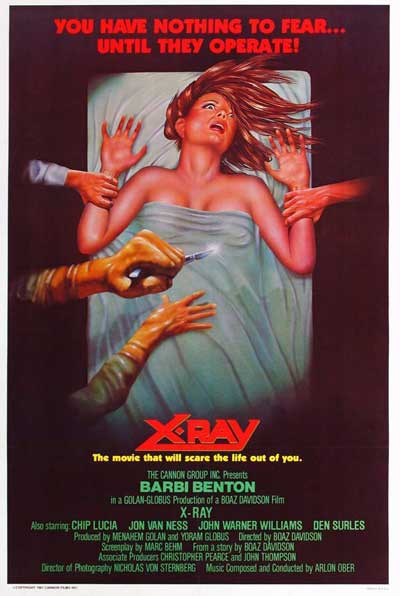 I thought that Hospital Massacre was pretty awesome. It has all the elements needed to make me happy (such as a creepy flashback story, fun death scenes, and a masked killer roaming around killing everyone in sight). I definitely think that it was worth the many years that I had to wait to see it and I wasn’t let down in the least. If you haven’t seen it then I highly recommend that you check it out as I firmly believe that many viewers out there will love it.