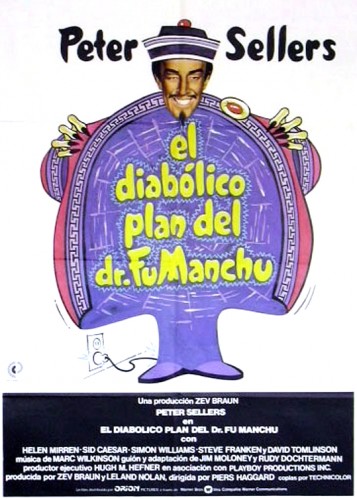 “Fu Manchu’s 168th birthday celebration is dampened when a hapless flunky spills Fu’s age-regressing elixir vitae. Fu sends his lackeys to round up ingredients for a new batch of elixir, starting with the Star of Leningrad diamond, nabbed from a Soviet exhibition in Washington. The FBI sends agents Capone and Williams to England to confer with Nayland Smith, an expert on Fu. Nayland suspects Fu will kidnap the king and queen and demand the George V diamond as ransom. Scotland Yard recruits Alice Rage to stand-in for the queen. Fu nabs the ‘fake’ queen; Rage becomes enamored of Fu and aids him in his quest for the George V diamond.” (courtesy IMDB)

Comedy actor Peter Sellers rose to fame on the BBC Radio comedy series The Goon Show. His talent to portray a range of characters and accents contributed to his success in films and earned him many awards on both sides of the Atlantic. Many of his characters became ingrained in public perception of his work. Unfortunately, his private life was plagued by turmoil and crises, including emotional problems and substance abuse, married four times with three children. Despite his personal chaos, he is probably best remembered as Inspector Clouseau in The Pink Panther (1963) films, Clare Quilty in Lolita (1962), three separate characters in both The Mouse That Roared (1959) and Doctor Strangelove (1964), and as the television-addicted man-child Chance The Gardener in his penultimate film Being There (1979). 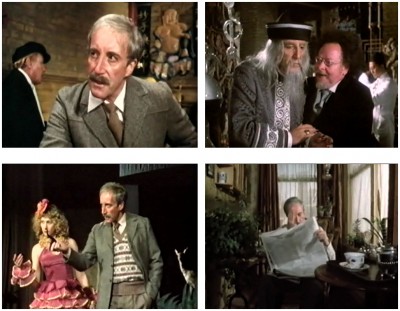 Any biographer of Peter Sellers has to resist the temptation to stop right there. What occurred in the last months of his life was basically a series of reruns: More marital problems, dubious professional judgment, egocentric behaviour and, to top it all off, a major heart attack. But life does not resemble the perfect biography and rarely ends as tidily as one might wish. Between the completion of Being There and his final fatal heart attack the following year, Sellers was visibly dying. When he flew to Paris to make his last film, The Fiendish Plot Of Dr. Fu Manchu (1980), he startled the cast and crew with his emaciated sickly appearance. He had lost too much weight too quickly and his skin had begun to crinkle like parchment. For years his doctors warned him of the need to rest but, like a compulsive gambler, he had to keep playing until luck came his way again. With Being There, it had. Since he was a rich, unhealthy man past middle-age and, since The Fiendish Plot Of Dr. Fu Manchu was obviously not the kind of film that would add to his reputation, I can only assume that he had finally been swallowed-up by his own public persona – jet-setting comic genius and temperamental husband. If so, he played it out with a vengeance.

Fu Manchu was created by Sax Rohmer in a series of short stories which ran in Story-Teller magazine from 1912. These were soon cobbled together into best-selling novels. For several years Rohmer tried to escape from the loom of his most famous character, but following the success of Fu Manchu in silent films during the twenties he was driven to resume the series and to continue it throughout the remainder of his long writing career. Actor Harry Agar Lyons first played Fu Manchu in the short silent films of the twenties. The first talkie to feature the devil doctor, The Mysterious Doctor Fu Manchu (1929) starred Warner Oland, who repeated the role in two subsequent films. However, the most memorable Fu on celluloid proved to be Boris Karloff in The Mask Of Fu Manchu (1932). He was followed by Henry Brandon, who took on the role in the serial Drums Of Fu Manchu (1939). Decades later, a new series of five Fu Manchu films was made in Britain, with Christopher Lee filling the part splendidly – The Face Of Fu Manchu (1965) was the first of these, and The Castle Of Fu Manchu (1970) was the last. Except for the occasional parody, it would seem the seminal super-villain Fu Manchu has been forgotten by modern movie audiences. 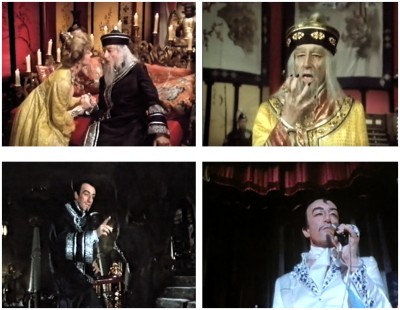 Peter Sellers’ first act was to have director Richard Quine removed from the project due to ‘creative differences’. The second director chosen, John G. Avildson, soon went the same way. When the script was finally completed and filming got under way, the director was a young Englishman by the name of Piers Haggard, who had just completed two of the best television dramas of the seventies: Pennies From Heaven (1978) and The Quatermass Conclusion (1979). Every weekend Sellers would fly to his Swiss villa, but one Monday morning he didn’t return. Doctors, troubled by his persistent physical fatigue, had advised complete rest for a month in a Geneva clinic. The film was postponed until early 1980, at which point Sellers had Haggard removed from the project, and insisted on directing the film himself! Suffering hours of agony in makeup as both Fu Manchu and his arch-enemy Dennis Nayland-Smith, then exerting himself on both sides of the camera, Sellers gave the impression of committing suicide in a peculiarly slow and disagreeable fashion.

The Fiendish Plot Of Dr. Fu Manchu premiered after Sellers’ death, and was panned by the critics mercilessly and regretfully, as if he ought not to have survived long enough to make it. There is a certain poignancy in the central story-line: His minions attempt to locate a life-giving elixir while the aged Fu Manchu is kept alive by increasingly violent electric shocks. Unfortunately, Sellers’ touching, finely detailed performance as Dennis Nayland-Smith – an ‘old-school’ Englishman in flannel trousers, houndstooth checkered jacket and wool tie – sadly went unnoticed in the rain of adverse criticism.

There are some amusing exchanges, for instance, when Fu Manchu is informed of a new disaster befalling his organisation, he says “That is good news.” – “Why is it good news, master?” – “Because I’m in no condition to receive bad news.” In another scene Fu Manchu’s minions attempt to kidnap Queen Mary at the Botanical Gardens by disguising themselves as Englishmen…and flowers. But the script lacks discipline and the supporting cast – including Helen Mirren, David Tomlinson, Sid Caesar, John Le Mesurier, Steve Franken and Burt Kwouk – lacks direction, suffering irrevocably from Sellers’ tampering. By the time the film finishes with a rejuvenated Fu Manchu impersonating Elvis Presley for no particular reason, it becomes painfully obvious that all involved had run out of both steam and ideas. 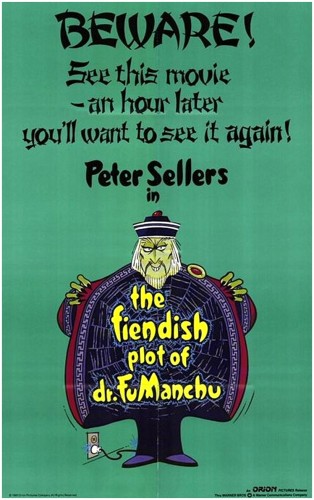 Exhausted, his body disturbingly shrunken, Sellers prepared to deliver his own coup de grace. After collapsing in Dublin, he flew to the Cannes Film Festival where Being There was being screened, then to Hollywood, then back to the UK for a long-standing reunion with fellow Goons Spike Milligan and Harry Secombe. Soon after, on the 22nd of July, he suffered a severe coronary while staying at London’s Dorchester Hotel and, two days later, Peter Sellers passed away from ‘natural causes’ with his son Michael at his bedside. And it’s on that rather sad thought I’ll ask you to please join me next week so I can poke you in the eye with another frightful excursion to the backside of Hollywood, filmed in glorious 2-D black-and-white Regularscope for…Horror News! Toodles! 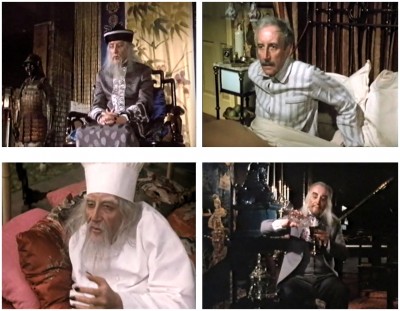