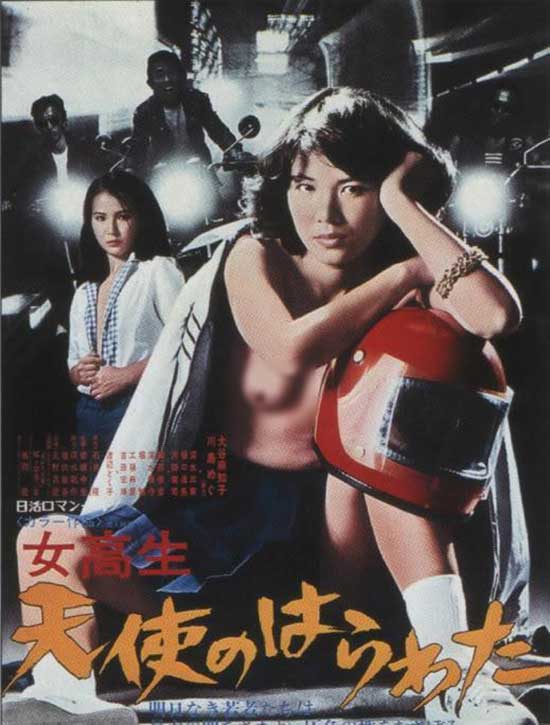 Kawashima, Kajima, and Sadakuni spend their days riding motorcycles and terrorizing/raping young girls. Kawashima is overly protective of his little sister, Megu, who does not know about her brother’s terrible activities.

Angel Guts: High School Co-Ed, or Jokosei: tenshi no harawata, is the first film in a series of nine Angel Guts films, most of which were released under the “Violent Pink” line by the legendary Japanese film production company, Nikkatsu, and which are based on a manga series written by Takashi Ishii (who would go on to write and direct many films, including Flower and Snake 1 & 2, Black Angel 1 & 2, and Evil Dead Trap [writer only]). Each entry in Ishii’s Angel Guts series features a strong, independent woman named Nami (based on the writer’s own wife), and each story deals with rape, sex, violence, and the consequences of it all. Nami is played by a different actress in each film – each film can, in fact, stand on its own – and a number of different directors made the films, with veteran director Chusei Sone helming this first entry as well as the follow up, Angel Guts: Red Classroom, while Ishii himself ended up directing the final three entries (Angel Guts: Red Vertigo; Red Lightning; and Night is Falling Again.) 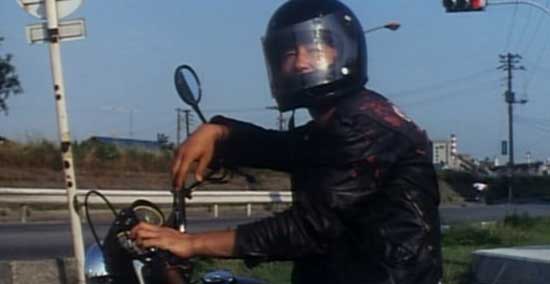 This one follows a mini-biker gang of sorts, a band of young hoodlums that terrorize random victims: there’s Sadakuni (Tatsuma Higuchi), a wild man with a knife; Kajima (Kenji Kasai), a violent, women-hating beast; and Tetsuro Kawashima (Sansho Shinsui), who is equal parts good and bad, and seems genuinely split between a) wreaking havoc alongside his gang and b) taking care of his younger sister, Megu (Megu Kawashima), and maybe falling in love with the right woman. Unfortunately, it would seem the “right woman” in Tetsuro’s eyes is Nami (played here by Machiko Ohtani), a young schoolgirl that he begins to obsess over after he stops Kajima from raping her. So begins the back and forth of violence, rape, and twisted morality, and as Tetsuro chooses to get closer to Nami, Kajima interprets this as him being “soft” and straying from the gang, and so answers by lecherously intimating himself into Megu’s innocently naïve life.

For a full 79 minutes, Angel Guts: High School Co-Ed puts that twisted morality on full display. Tetsuro is all about terrorizing the locals with his buddies, and maintaining a positive relationship with the yakuza, but he is ferocious with young Megu when she shows even the slightest bit of appreciation or admiration towards Kajima, because he doesn’t want her associating with people like that. 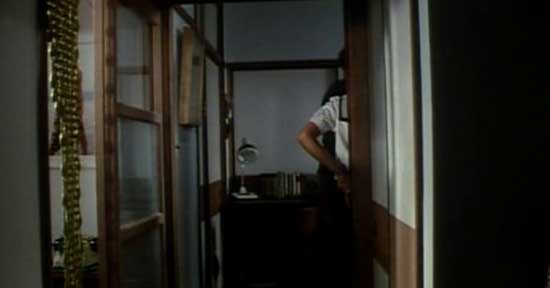 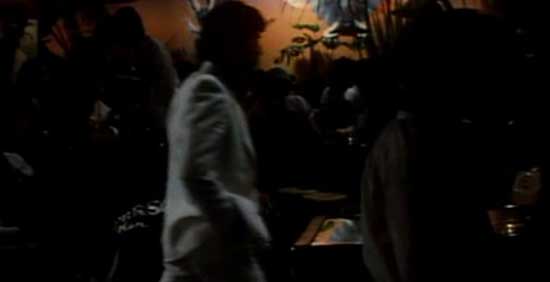 While Nami and Megu are both portrayed more as victims than anything else, Tetsuro might come across as the “good guy,” but only in comparison to his partners in crime. When the trio force a car off the road, beat up the male driver, and take turns raping his wife, Tetsuro plays “hero” by not allowing his friends to kill her. Later, when the trio chase and corner Nami in a trainyard – this happening after Tetsuro has already saved her from being raped by Kajima – our “hero” beats her, chokes her unconscious, then revives her and ties her up and rapes her. But when Kajima tries to join in, Tetsuro attacks him. And this says nothing about the strange incest vibes coming off Tetsuro when he notices her changing and lingers in her doorway watching. This skewed sense of right and wrong remains front and center all the way until the final moments, when the audience is left wondering if any of these characters have any redeemable qualities.

It’s not all rape and violence here though; director Sone (in tandem with cinematographer Nobumasa Mizuno’o) delivers some style in his storytelling approach. Angel Guts: High School Co-Ed kicks off with washed-out, black and white shots of the bikers patrolling the roads, driven by hard-driving 70s rock n’ roll, while credits cross the screen in a sharp red. The black and white resurfaces a couple more times later in the film as well. Later on, right around the midway point of the movie, we get some fun POV shots, putting us on the motorcycles with these ruffians as they stalk their prey. 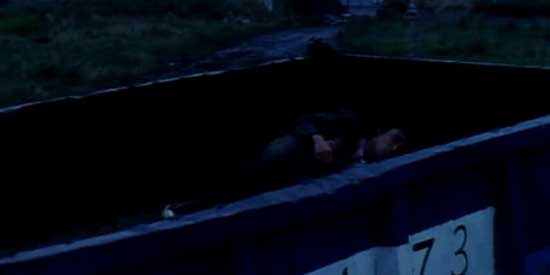 There’s a pretty decent use of music throughout, including a section of calm, peaceful music used in much the same foreboding way as in Deodato’s Cannibal Holocaust. This is a film where I can understand an audience’s criticism as much as I can agree with their compliments; it is also a film that will appeal mainly to a very specific audience. If you enjoy the films of the Pinku Eiga/Pinky Violence/Violent Pink era of Japanese cinema, Angel Guts: High School Co-Ed probably ranks in the upper half of those films. If you need your good guys in white, your bad guys in black, and ne’er the two shall mix, this probably isn’t one you’ll like. 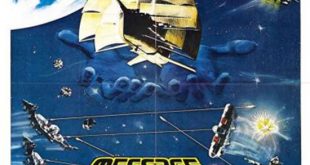