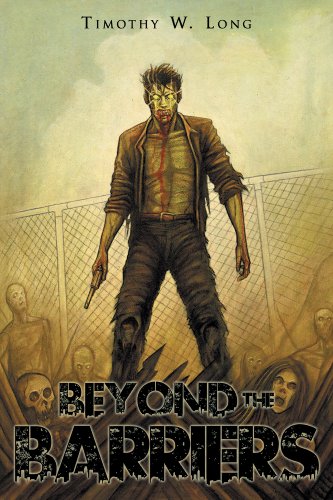 And the zombie fiction juggernaut thunders on with another addition to the genre. This time it’s by Timothy Long, and has the potential to be a better book than many of your run-of-the-mill zombie yarns. Once again we’re stuck with the damn first person narrative though, which is getting more annoying as time goes on.

That aside, Beyond The Barriers has a great deal working in its favour thanks to the likeable main character, Erik Tragger. Erik escaped to the mountains when the world started falling apart, and after five months he returns to discover the world has been overrun by zombies. He joins up with a bunch of survivors and the fight is on to save Portland, Oregon from the advancing zombie hordes.

The strength of the book lies in the interplay between Tragger and the other survivors, their conflicting interests and motivations. Sadly, there is also a weakness to counterbalance that quality, and that is Long’s tendency to let the first person narrative run away with itself, leading to unnecessarily lengthy internal monologues from our humble lead character.

The book is thus in need of some editorial pruning, which would have lifted it from a good book to a great book. One point I must mention is that a great number of questions are raised which are never answered, and while the book is clearly being set up as the first in a series (a trilogy , I believe), more clues could have been dropped as to the motivations behind the chaos being wrought by the undead.

As it is, the story’s end is a little too ambiguous to feel complete, and the book doesn’t work that well as a standalone tale because of it. There are moments of greatness, but those tedious monologues take you out of the action and raise the risk of skipping a page or two here and there, which will lead to some readers giving up on the novel altogether, which would be a shame, as Long is a fine writer with some great ideas.

One of those great ideas is the creation of anew variation on the zombie creature mythos, making the undead ghouls that much more sinister and frightening. A rather introspective zombie novel it may be, but with a thorough edit to those monologues it would be very close to brilliant.