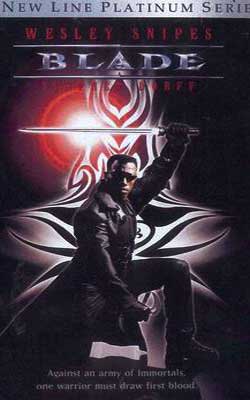 A half-vampire, half-mortal man becomes a protector of the mortal race, while slaying evil vampires.

1998 was a good year for Welsey Snipes. Quickly igniting an all-around action hero, his role as Blade sparked a franchise with a hit debut. Wesley brought the right mix of marital arts, cool demeanor and a no apology ass-kicking into his comic book character-turned-film franchise. Blade went on to inspire 2 more sequels and a short-lived TV series (though without Wesley, aka Kirk Jones).

Deacon Frost played by the younger Stephen Dorff, gave the vampire side a new leader with his rather snide, smart ass approach to kicking some juice into the old lore with some rave-inspired edge. The film was produced by New Line Cinema and Imaginary Forces (“Imaginary Forces” previously only limited to providing great title sequences to new hot film properties) 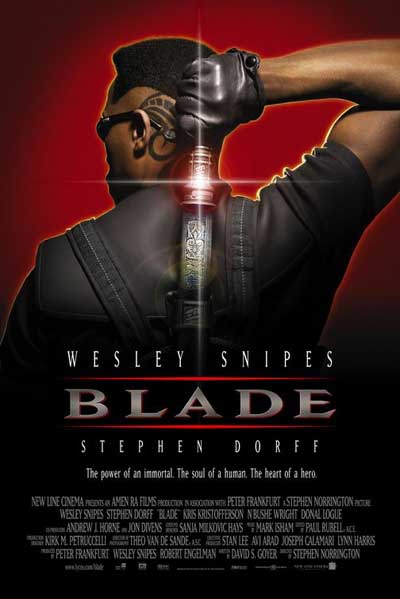 An effective sidekick arrived in Kris Kristofferson as Abraham Whistler. Abraham is actually Blade’s mentor and brains behind much of Blade high-tech gadgetry. His deep aging face reflects the years of fighting off these savage blood suckers, of which both of them have devoted their lives to. 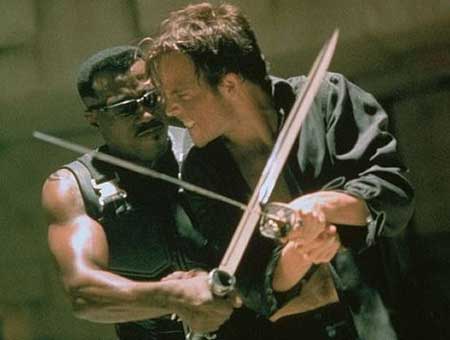 “Blade“, is the one they call the “day walker”. He was born from a mother who was just bitten before prior to giving labor. His much-feared advantage is that he is not effected by sunlight like the rest of his kind. He also seems to be able to handle garlic pretty well while possessing the vampire’s strength. Blade is a vampire hunter who wishes to rid the world of their evil masses. His approach has always been a vigilante-with-a-cause-style slaying vampires on sight. It probably doesn’t hurt that he fights like a ninja. 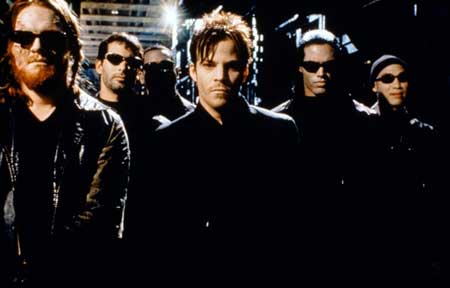 As we come into our introduction to the “Blade” films, we are taken into a mid-progress rave. Those nasty vampires like to play with their food of which luring unexpected bodies into an all night dance romp appears to do the trick. I in fact love this intro which marks it as one of my more favorite for a vampire film. Actress Tracy Lords as Racquel makes a brief cameo as she brings her night’s catch into the lair. While they a dance, the overhead water valves begin to shower the crowd in pure blood. 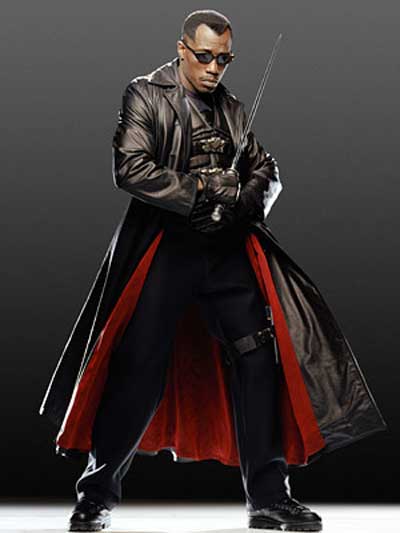 The Vampire Shadow Council is concerned. Led by the one of the elders Dragonetti, they explain that keeping a low profile has been the reason for their lasting existence with the humans, a simple co-existence. Deacon Frost has other plans. His need to dominate the species will be led by an ancient ritual that will unleash the ultimate power, a blood god they call La Magra. The ritual has long been kept in secret protected by a undecipherable code. But with the help of modern technology, Frost is on the verge of discovery. The ritual is to be performed in a location called the Temple of Eternal Night.

In a subplot, Whistler and Blade are in pursuit of a vampire cure. Dr. Karen Jenson who was just attacked is used as a test model. Blade in effort to keep his vampire urges subdued also injests a serum. The serum as a standalone is not strong enough to cure him. It does provide a temporary solution while still keeping his abilities as a day walker. 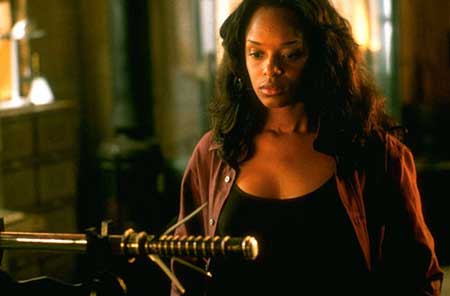 Blade brings an intensity to the screen often in effective but simple terms. His appearance backed by a pose-ready-for-action stance usually is enough to get a few running. Blade’s fast moves and savvy ass kicking is what takes down numbers. His origins come, like many, from the Marvel comic universe. His story has been reported as being modified to better fit the film industry needs.

The film itself uses a modern style of presentation using perspective shots, fast edits and close-up zooms. Oddly enough, “Blade” received mixed reviews. Since outcome is really measured on a financial scale rather than a review scale, it was deemed a success. “Blade” was reported to have budgeted under 45 Million though pulling in 3x that with a respective 131 million. This success led to the follow up of sequels. 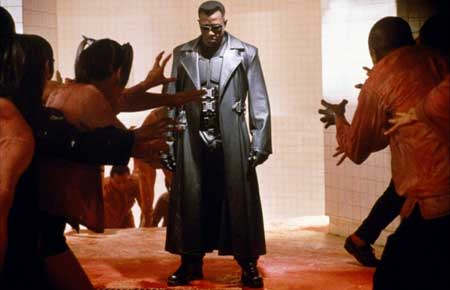 It’s over use of CGI ash-dissipating kills may have been a source of dissatisfaction especially to those who prefer practical effects over computer. 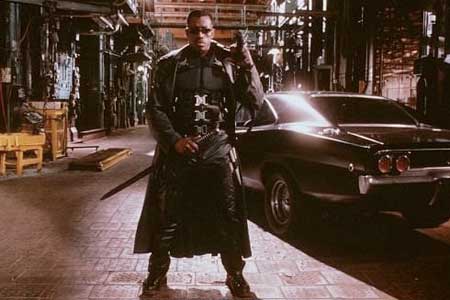 I full enjoyed the Blade film, easily marking it as one of my favorite vampire films of all time. Blade’s sequels never quite lived up to the debut, but still provided great action sequences. “Blade” brings in all the best qualities of Snipes work using style, lethal kills and an on screen presence backed by his confident action performance. His full length leather coat image seemed to inspire other later films of this genre.