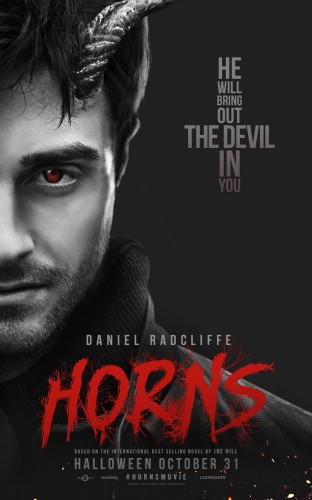 Ig Perrish is suspected of murdering his girlfriend. To make matters worse, he sprouts a pair of horns, the demonic kind. When the effects of the horns leads to people around him revealing their deepest, darkest secrets, Ig begins to unravel the mysteries behind the tragic events that have changed his life forever.

Adapted by Keith Bunin from a novel by Joe Hill and directed with great flair by Alexandre Aja (Hills Have Eyes, Piranha 3D), Horns is a twisted horror thriller that explores the secrets in men’s souls: betrayal, lust, disdain and greed. Daniel Radcliffe (The Woman in Black), of Harry Potter fame, takes on an American accent to portray Ig Perrish who not only has to deal with being accused of murder but also has to contend with the growth of a pair of horns on top his noggin. But, more importantly, it is what comes with the horns that drives the story as they encourage those around him to reveal their true thoughts, their darkest secrets. Radcliffe is brilliant in the role. The story is carefully pace weaving in Ig’s investigation with flashbacks to his childhood and that fateful night Merrin, his girlfriend, was murdered. The more he learns, the more devilish he is tempted to become. Somewhere around mid-second-act, Horns has you in its grasp where its more about the reaction and the emotion than the mystery itself, mostly thanks to Aja and Radcliffe.

While the story has the fantastical conceit of a pair of horns sprouting on Ig’s forehead, its the exploration of the God’s honest truth vomiting from everyone’s mouth that is the most enthralling element of Horns. The more Radcliffe’s Ig faces those truths, the more sympathetic he becomes to the viewer. There is horror in what everyone around Ig thinks, the dark nature that lies beneath the surface of all those around him. Without any filters, the “truth” is crushing, devastating and, at time, exhilarating. The effects are hammered home with far more impact the closer those are to Ig. His parents reveal their honest thoughts about Ig, their disappointments, their darkness, nastiest desires, favoring him over his brother is extreme ways. His brother, his best friend, his child hood companions all turn out to be monsters in different way while Ig is the one treated as a beast suspected of murder and, now, visually, with the advent of the horns. Ig starts out pathetic, becomes sympathetic and ends up heroic. Ig transforms in more ways than one and so does Horns.

Daniel Radcliffe continues to travel an interesting and fascinating career post Harry Potter. Horns is another side to the young, experienced and talented, actor. While the combination of recognizing Radcliffe as a British actor and his having an American accent throughout is distracting at times – which is due to pop culture, not the actor nor the direction – his Ig Perrish is one of his finest performances. When he faces his parents who speak their piece under the horn’s influence, Ig is visually shaken, the effects are heartbreaking. He does not crumble however, it seems deep down he knew these things anyway; but, hearing them out loud, from those loved unconditionally, is cruel and powerful. Radcliffe wears all this in his eyes, his brow, his composure. When he reacts violently to the ultimate truth about the murder, the anger, the fear and the compassion he tosses around simultaneously in a tornado of emotion is riveting. He is brave to make Ig a deplorable character at first, one even the audience is suspicious of the murder, but allows him to grow, to realize and explore a variety of human emotions from love, anger, fear and to reveal the impact of sacrifice and forgiveness.

The rest of the cast is superb as well. Juno Temple is enchanting as Marrin Williams, Ig’s girlfriend. Most of the film takes advantage of her beauty, reflecting how most of the cast, including Ig, see the character. But when the story focuses on her truths, it digs in deep with raw emotion. Temple elevates the film when she crushes Ig that fateful night as she declines his proposal ending their relationship abruptly without much explanation but with ample amounts of tears, secrets and heart break. Later, when she reveals the reasoning, she draws all attention to her character as if a giant spotlight was burning into her eyes. David Morse shares a high in the film where he struggles with the choice to condemn or forgive the man he feels murdered his daughter. He wears that struggle in his face, in his constant shifting of posture and glance, one second he is ready to fire the shotgun he has pointed as Ig, the next he is ready fall weeping to the floor. Joe Anderson gives a tortured performance as Terry Perrish, Ig’s brother who faces his own horrors, addictions and lies even though he is favored in the Perrish family. The chemistry between each actor and Radcliffe is key to the film’s success, the feel like lovers, friends, family. Unmistakably, Horns has a great cast. 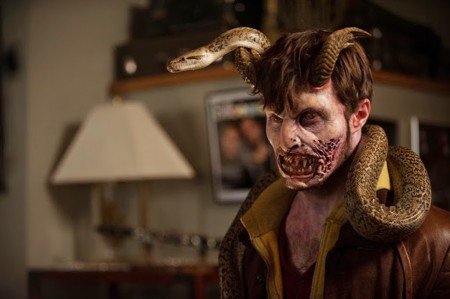 Horns is Alexandre Aja’s most mature film but perhaps his least accessible. Horns is far different a film than the title and the marketing describe. His approach to the film is mixed at times. He handles the action toward the end marvelously with emotion, chaos and grandeur. He also composes the softer scenes with style as well, especially the ones between Radcliffe and Temple. Far different than say Piranha 3D, he allows the actors to be the story not the fantasy-tinged visual, even when the horns are in the audience’s face. Early in the film, he mishandles some of the comedy which creates an uneven tone to the first act or so. But that falls away soon enough as the story leaves those ideas behind to focus on Ig and his closest friends. But he also completely sells the idea of horns growing on Ig’s head in a natural way. He is also supported by terrific special effects too, both practical and digital, later on in the film. Horns is Aja best effort yet displaying a director that is growing in confidence, style and composition.

Horns is a lot of things rolled into one. It is a love story, a murder mystery, a satire of sorts and a horror film. The horror is less about graphic nature – although there is that too, especially during the conclusion – and more about the horror of what man does to his fellow man. It brings in elements of religion, thankfully, without being preachy or zealous. The tone of the film is uneven during the opening scenes as the director and the script struggle to get their footing; but, once they do, the film excels with impact and emotion and consequences. Daniel Radcliffe impresses as Ig Perrish giving the audience a flawed but enigmatic character to emphasize with and support – to believe in, trust and follow. The film grabs it audience with Ig’s journey and has not only Ig maturing during the story, but many of the supporting characters as well from his brother to Merrin’s father. Horns is a rewarding, entertaining film.