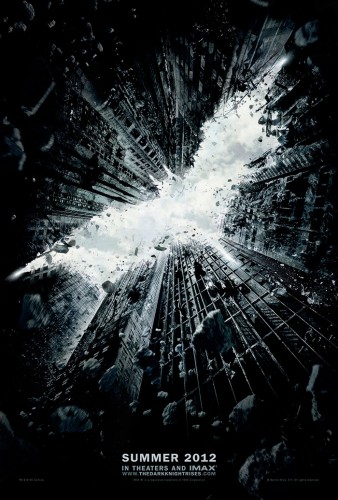 Eight years on, a new terrorist leader, Bane, overwhelms Gotham’s finest, and the Dark Knight resurfaces to protect a city that has branded him an enemy.

It’s been four years since the second of director Christopher Nolan’s proposed trilogy of Batman films “The Dark Knight” was released. A masterful film that ended with Batman taking responsibility for the murder of district attorney Harvey Dent even though he didn’t do it. Wayne knew that by doing so he would be making Batman a wanted man but it was done for the greater good. Gotham city now had someone that they believed died a hero and rallied around that belief, making it a much safer city to live in. Now comes the last of the trilogy and I will admit I thought Nolan & company would be hard pressed to top “The Dark Knight” but I’ll be damned if he hasn’t (Once again) made an amazing film that is not only the best of the three but the best film I’ve seen so far this year and the best “Superhero” film made to date. 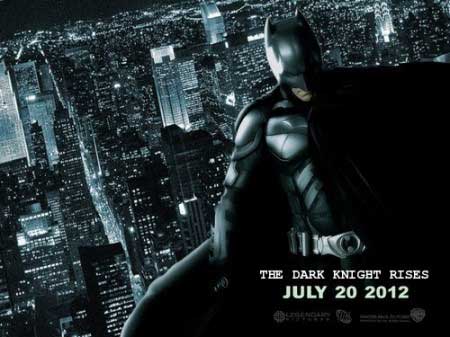 As the film opens Gotham city is enjoying an unprecedented period of relative calm. Crime is at an all time low and, as Bruce Wayne planned, Harvey Dent is believed to be the reason that life is so good in Gotham right now, his ultimate sacrifice has ushered in a new era of peace in the city. Batman has vanished without a trace but commissioner Gordon (Gary Oldman) still has issues with the fact that the population of Gotham believe that Batman is responsible for the murder. He knows the truth and is still remorseful over the decision that Bruce Wayne has made by exiling the caped crusader from Gotham. 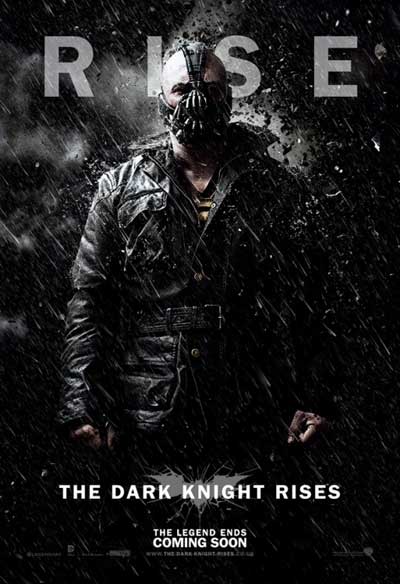 But he doesn’t have much time to feel bad because a new villain has made his debut and he wants nothing more than to see Gotham crumble into dust. He calls himself “Bane” and as played by Tom Hardy he is a overwhelming mammoth of a man that is seemingly without emotion yet looks to be straining to explode under the eerie gas mask he is never without. Bane sounds like a very well educated individual which just makes him scarier and his henchmen are loyal to him unto death which we find out during one of the most impressive opening sequences I’ve ever seen in a film. Bane is fearless, remorseless & in absolute control. Once he arrives in Gotham (And the way he announces his arrival), Everyone knows that the days of relative peace & calm that have made Gotham such a great city to live in are long gone. Bane has arrived and he has brought death & destruction with him. In addition, an extremely efficient burglar (Selina Kyle AKA Catwoman) has been making the rounds and amassing a nice reputation for herself although her ultimate goal seems a bit murky in the beginning. Anne Hathaway plays Catwoman as a beguiling ingenue with coquettish eyes that mask a cunning thief and excellent fighter who can more than handle herself in any situation.

Although Batman has disappeared, Bruce Wayne is alive & has become a recluse. There are rumors of him living life as famed recluse Howard Hughes did in the final years of his life, long uncut finger/toenails, jars of urine, etc but in actuality he is nursing some heinous damage to his body. He has no cartiledge left in his knees & shoulders. His brain is in a semi concussive state & he uses a cane to get around although he rarely leaves his home. His spirit is seemingly broken and Wayne industries has quietly been hemorrhaging money and is near bankruptcy due to some bad business decisions that Bruce has made over the last few years. But thanks to the theft of his mothers pearl necklace (By Catwoman) and the arrival of Bane he finds himself back in the fray, much to the delight of commissioner Gordon. But Gordon’s delight is short lived as he finds himself badly injured at the hands of Bane and his henchmen and in their initial confrontation, Batman is completely humbled by Bane (“I was wondering what would break first, your spirit or your body”)? 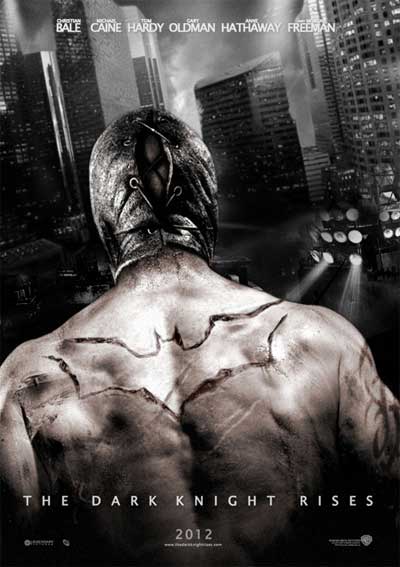 Marion Cotillard plays Miranda Tate, initially introduced as a love interest for Wayne she eventually helps out by taking financial control over Wayne industries but there is a lot more to her than meets the eye. Also returning is Morgan Freeman as Lucius Fox who is still developing weaponry in a secret lab located underneath the Wayne industries headquarters which are heavily featured as the film proceeds but the most important new character in the film is beat cop Blake (Joseph Gordon-Levitt). Blake is the conscience of the film, an idealistic individual who screams “Do Gooder” as soon as he appears. He still believes in doing the right thing, the right way and although he is initially mocked by his superiors eventually his sense of decency & desire to keep Gotham safe win the day and after some excellent detective work finding clues connecting Bane to a member of the board of directors at Wayne industries is promoted to detective. 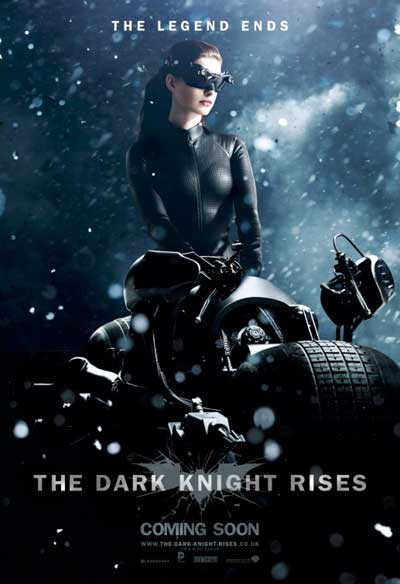 Bane manages to get a hold of a device that can be converted into a four megaton nuclear bomb and has also trapped nearly the entire police force of Gotham (3000 strong) underground in the sewers, and he has released all prisoners from their cells to create a state of pure anarchy in the streets. His plan is to pit the “Have’s” against the “Have Not’s” (Much like the “Occupy” movement that swept the nation some months ago) and there is a montage of scenes depicting ordinary people dragging the wealthy from out of their homes and committing crimes in a futile attempt to restore the balance of wealth to the majority. But Bane knows that this is impossible, his plan is to simply wipe Gotham off of the map. One of the big secrets is why he loathes Gotham so much but it is quite the surprise when we find out who Bane really is and why he’s doing this. The film is full of surprises that turn the film in some wildly unanticipated directions and that’s part of the joy in watching it. The script (By Nolan & his brother Jonathan) is full of quotable lines that are both iconic and ironic and the film is expertly acted. Bale still has that silly sounding “Bat growl” that he uses whenever he puts the cowl on but besides that he is the silver screen’s best Batman. Tom Hardy is masterful as Bane but there are some problems with his voice and how it sounds coming out from under his mask. He almost sounds foppish in some scenes but the biggest problem is that some of his lines are unintelligible. Although it’s not a deal breaker it can be a bit annoying at times. People had some doubts about whether someone who is as perky looking as Hathaway is could actually portray Catwoman as effectively as Michelle Pfeiffer did in “Batman Returns” but you can toss those doubts away as she is everything the character should be: Sexy, athletic, coy, scheming & unpredictable. 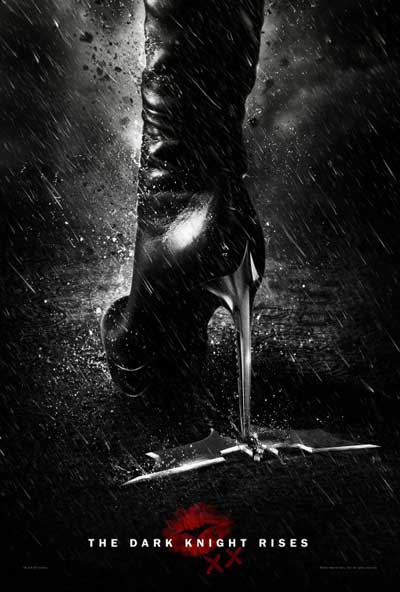 “The Dark Knight Rises” is a pretty humorless movie which works in it’s favor as Batman is not a character that you look to for laughs. The film is indeed dark & foreboding with very little joy to be found anywhere during it’s running time but that just makes it all the more effective. Gotham is falling apart and if Bane gets his way hundreds of thousands of people will die horribly, nothing to smile about there acolytes. Nolan has crafted a deliriously entertaining movie with absolutely no laughs to be found in it, not even in the periphery of it all and that is no easy task. Humor (Even uneasy humor) seems to be one of the standard tropes in the glut of “Superhero” films we’ve been exposed to over the past five years but here there is none and the film is all the richer for it’s absence, it’s actually refreshing! Even more impressive is Nolan’s insistence in minimizing the use of CGI in the film, he insists on using practical effects except in the most extreme of situations. You will know where CGI is being used only because the scenes that use it feature some pretty much impossible physics. Otherwise everything you see on screen was done for real folks and it’s pretty f*cking fantastic. 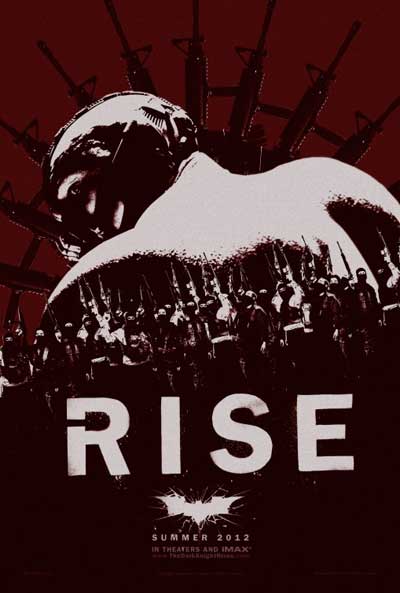 How does it all end you ask? Well most of you probably know by now but for the few that don’t…I’m not saying! There are some big surprises and clues as to where the franchise might go in the future (Although Nolan has gone on record as saying that he will not be returning to helm a fourth entry should one go into production) and all of them are tantalizing but I guess we’ll just have to wait a few years to see what happens in that regard. You might be surprised to find yourself shedding a tear or two as well as the end approaches which leads me to the one major quibble I have with the film…it’s running time. “The Dark Knight Rises” is 165 minutes long and while those minutes never drag it still seemed excessive to me. There are some elements of the plot that seemed a bit superfluous & unnecessary to me but that’s just me and like I said, the movie never drags at all. Do I think it’s as good as “The Dark Knight”? Yes I do, I think it’s better than that film and I hope that the academy sees fit to do it justice next February. Not to make up for the egregious omission of “The Dark Knight” during award season four years ago, but because it’s a damn fine film that stands on it’s own. A thrilling adventure that will leave you breathless when it’s all said and done, I am giving “The Dark Knight Rises” five shrouds out of five. Despite it’s excessive running time it is a film that you will not forget anytime soon. It’s a rare occasion when a film garners a standing ovation from it’s audience but this film did and it was well deserved. The best “Superhero” film ever made…bar none.