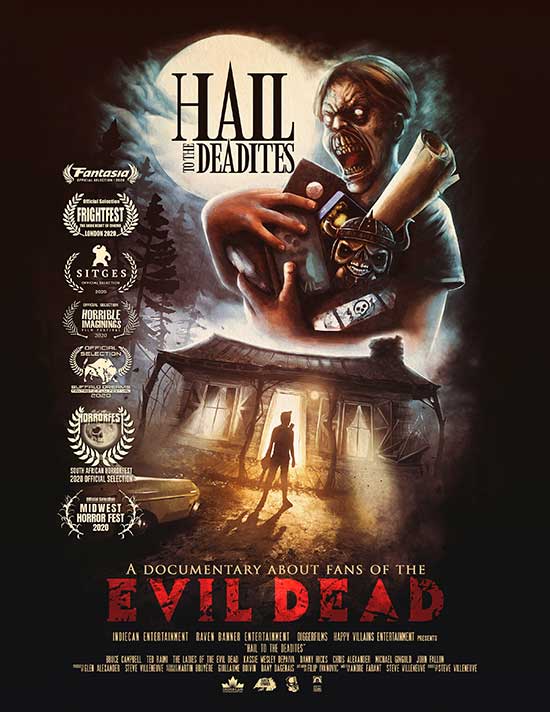 After winning a Bronze Audience Award at the Fantasia Film Festival, the Evil Dead documentary HAIL TO THE DEADITES has just released its official trailer (edited by Jon Kondelik, co-owner of Dual Visions) and a brand new festival poster (design by Filip Ivanovic).

“Inspired by the 1981 classic’s cult following, HAIL TO THE DEADITES is a documentary about the fans of the EVIL DEAD franchise. Through interviews with the cast, crew, collectors, fans, freaks and geeks, HAIL TO THE DEADITES seeks to illuminate the darkest reaches of the EVIL DEAD franchise’s undying and still-growing popularity, a popularity that has spawned four films, a TV series, comic books, figurines, and surpassed even its creator’s wildest dreams. HAIL TO THE DEADITES puts the spotlight on the fans that cultivated and spread this groovy pop-culture infection! It celebrates those who’ve celebrated the films!

Last week, the film was acquired for Canadian distribution by Indiecan Entertainment, and the international sales bill be handled by Raven Banner Entertainment who currently feature the title at the Toronto International Film Festivals Market.

“I am extremely happy to have the chance to start a long relationship with Indiecan Entertainment. Avi wears Canadian Cinema on his sleeve, and I couldn’t have found a better home for Hail to the Deadites.” Says director Steve Villeneuve. “As for Raven Banner, they have established themselves as the best sales agents for any horror film. I’m truly happy to work with them again“

“I’m extremely excited about starting a working relationship with Steve Villeneuve both on the distribution side and also starting a collaboration of making some cool documentary films together” says Indiecan’s Avi Federgreen. “Steve’s an excellent filmmaker and I think he’s really hit a home run for all of the EVIL DEAD lovers out there!”.