While punk died long ago, it left a legacy of rock-and-roll music played loud, played raw and played without concern for narrow scope and genre definitions that curtail so many styles. This leads us to Aiden’s Some Kind of Hate. Born out of love for horror and punk, the album blends the two in an angry and surprisingly fun rock album.

Aiden formed in 2003 as a punk/emo band. They recorded their first album Our Gang’s Dark Oath whiletwo of the members were still in high school. Featuring little more than high-pitched guitars and lots of screaming, they showed enough promise to sign with Victory records in 2005. Their earlier work borrowed heavily from punk bands like Misfits and Rancid, and the burgeoning emo scene.  Over the years, Aiden personalized the mature sound we hear today. Their influences come through loud and clear, but with Aiden’s own style.

Musically, the album is driven by Jake D’s modern take on punk drums. Throughout the album, you hear classic punk beats laced with crash cymbals normally heard on metal albums. To this, Aiden adds chunky guitars, hoarse vocals and lots of sound effects, creating this decade’s version of the glam rock band.  Listen to some old Rancid, New York Dolls, Sweet, and early LA Guns to see what I mean.

Some Kind of Hate, isn’t a rehash of an old sound, it’s a new creation in the tradition of bands that just play rock and roll, and don’t care what anyone thinks. When Aiden wants to write a punk song, they create Transmission. When they want to write pop songs with choruses and sing-alongs, they create In the End and Broken Bones.  And you know what? They do it well, and they do it their way.

In this review, I often refer to Aiden’s influences. And while they proudly show where the band’s style came from, Some Kind of Hate owns and embraces its own sound. I highly recommend this album. In a decade, we’ll hear a new batch of bands borrowing from that old Aiden sound.

Tags Aiden Some Kind of Hate 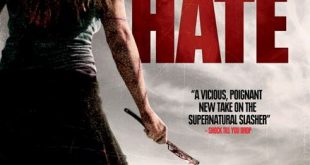 Some Kind Of Hate Comes to Haunt theaters, VOD & iTunes on Sept. 18th.