Hey there Fiends, it’s your punk horrorhost, Rob Delamorte, wrapping up yet another summer, yep it’s almost over, so pull out your leather jackets, lace up your Docs..the ultimate season is looming..and once again, let’s get down to some f*cking horror business!

We start off with the best in sin-ema, and believe me there’s alot of amazing offerings to place on the horror altar. 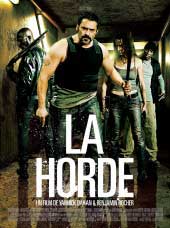 First up on the list is a gharish gem from the romance capital of the world, France, this has nothing to do with love, unless you love the idea of another undead invasion film like I do. The Horde has been introduced to America thanks to IFC On Demand. The story involves four corrupt police officers who decide to hunt down the gang who killed one of their own.

After tracking them to an abandoned block of flat houses, and disastrously attempting to take out the ringleaders,the two divided groups are forced to team up to defeat a sudden wave of ravenous living dead.Check this one out, do yourselves a huge favor! If Luc Besson and Zack Snyder had a creepy anomaly that defies science, this would be that offspring. The Horde can be seen on your IFC On Demand option in the coming weeks.C heck with your local cable provider for details..or if you have Com cast, congratulations, you can definitely order it! 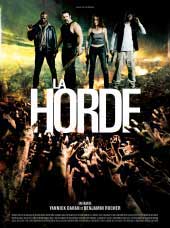 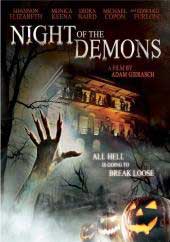 Hold your breath, free your mind because yes, I am about to recommend a remake, but believe me, if you love a little Iggy with your ick, then be sure to get your skullring adorned fingers on this one. Night Of The Demons, starring Shannon Elizabeth ,the superhot Diora Baird, and the long missing Edward Furlong, based on the 1988 Kevin Tenney flick of the same name takes over DVD shelves soon. The story begins when a group of hard partying friends face a night in hell as they attempt to defend themselves against an onslaught of demons intent on possessing their souls.

Adam Gierasch,director of Autopsy, announced that he wanted to make the punk rock horror flick he wanted to see when he was fifteen, including copious amounts of blood, nudity and gore, and for fans of the original, a cameo from the star Linnea Quigley, and understand if you know Ms. Quigley’s work, whatever she brings to the table will be awesome, it won’t be a three word line in the script.Linnea is always awesome!Look for Night Of The Demons when it skanks and slices on shelves October 19th,just perfect for a Hallow’s Eve at your horrid abode. 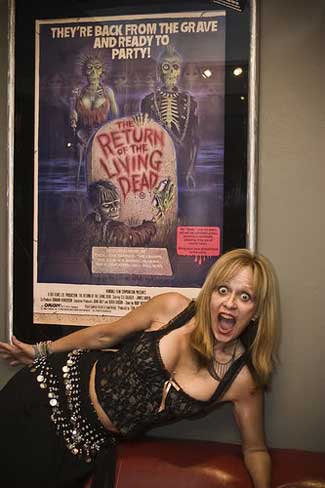 Sick and tired of running through the radio dial on your way to wherever, running through nothing but sh*tty summer anthems and constant hiphop?  Well,the fall has alot of killer tunes to crank your pleasure to eleven, and yes, this edition of music is extremely special, and you’ll all see why in a moment.  Just read on maniacs!

First, amazing news has been shouted from dark mountaintops, Rob Zombie and Alice Cooper tour together once again for the Halloween Hootenanny. The monster tour kicks off in Los Angeles at the Gibson Amphitheater on Thursday September 30th. Zombie drummer, Joey Jordison, will be pulling double duty on all dates playing with both Zombie, as well as playing with his own band,Murderdolls.  Be sure to check out the Godfather Of Gore Metal and The Superbeast when the tour phantom creeps into a town near you this fall. Check website for tour dates.

Aaah..boys and ghouls, now here it is, the treat to the trick I promised,and believe me it was truly a deadly delight for me as well. 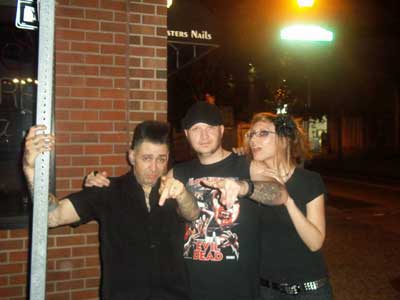 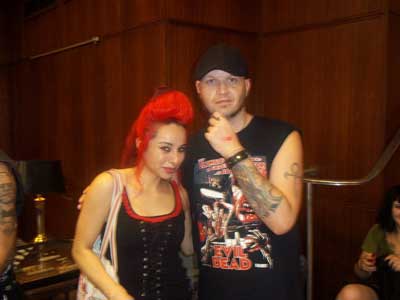 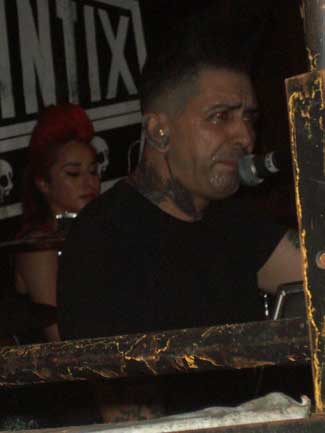 Legendary psychobilly trio, Nekromantix, may possibly be touring a small, that’s right,small venue near you.I had the pleasure of not only seing, but hanging with the band outside their stop at the First Unitarian Church in my hometown of Kill-adelphia! The venue itself only had capacity for about one hundred sweaty greasers so the experience was extremely personable, and most importantly, a once in a lifetime opportunity.Led by groovy vocalist,Kim Nekroman and his infamous coffin bass, which made him resemble a character of Django proportions, dragging his coffin around a western landscape.

Nekroman’s left hand man, Franc,wailing on the guitar, and the new addition to the terror trio, the breathtaking and supertalented Lux Drummerette, also from Sacred Storm on drums. The Nekro crew blasted through a fun, pitch perfect almost hour and a half set that was absolutely arena worthy. Oh, and just a little fy-die, they are the nicest, most gracious band you will ever meet in your whole reanimated existence!Be sure to check them out when they hit a town near you. And if you don’t know who they are, dig yourself out of your grave of oblivion you’ve been slumbering in since 1989 and go listen to one of the greatest psychobilly bands ever! Check NEKROMANTIX.COM for tour stop information, also check out LUXDRUMMER.COM to receive info on one the greatest drummers to play in a pair of five inch heels. Rawrrawr!

Looking for an awesome story with incredible artwork to chill you in the remainder of this Helter Swelter? Then I definitely have a title for you to get your bony fingers on.

This comic is definitely one of my personal favorites, and should be checked out by a more ravenous set of fans who love the feel of a classic horror story. Wulf and Batsy Volume 2:Lustmord Nightmares is a trade paperback collecting the series which is written and drawn by the highly underrated,Bryan Baugh. The story follows cute vampire,Batsy and her ferocious shapeshifter,Wulf.In this story, the two ghouls take residence at an all-girl college where they attempt to pose as normal humans, and live peacefully among the female students, but the almamater is haunted by an ancient monster that preys upon the young students for food. This series is loaded with monsters, graphic violence, and cute girls in all forms of undress, Batsy’s pretty smokin’ too. Wulf and Batsy,the 2008 Rondo Hatton nominee for Best Horror Comic, is available now from CryptLogic.

Searching for a great book to scare you into the sinister season? There’s definitely one that stands out, and it’s an oldie but a goodie that is also a great party favor to coincide with the upcoming Walking Dead series in October.The Delamorte Deadly Delight of the month is The Zombie Survival Guide:Recorded Attacks by World War Z reporter,Max Brooks.  The book chronicles, in vivid detail major zombie attacks in the African savanna, attacks on the legions of Ancient Rome, on the high seas with Francis Drake. These are gruesome yet heroic stories, complete with the freaking incredible artwork of Ibraim Roberson that brings the undead invaders to screaming life! Max Brooks reveals how other eras and cultures have dealt with and survived the centuries old viral plague. Organize before they rise when you pick up Recorded Attacks out now! 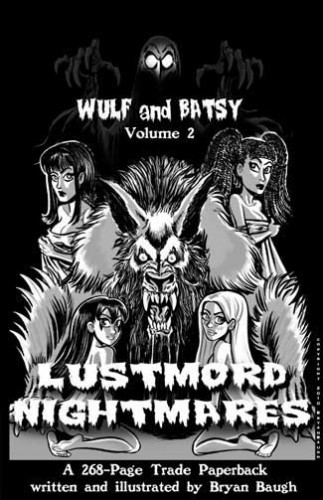 Searching for something on television that keeps the fun of the genre alive? Then look no further because Scream Queens 2 is on the air! Originally the baby of writer of Dawn Of The Dead and director of Slither, James Gunn. This season’s directorial torch has been passed to 2001 Maniacs director, Tim Sullivan .If you don’t know, the show has twelve unknown girls compete to play a major role in Lionsgate’s conclusion to their extremely popular franchise, Saw 3D. Cohosted by My Bloody Valentine’s Jamie King and super effective acting coach, John Homa,the show has the Queen wannabes go through many challenges to test their horror mettle. Only eight lovely ladies remain in the competition as of right now, who will be the next to get the axe?  Find out when Scream Queens 2 airs Mondays at 10pm on VH1. 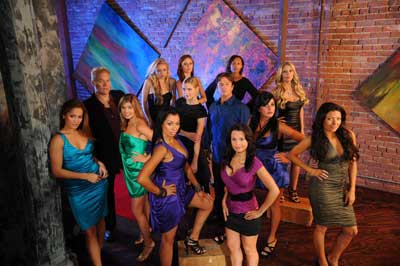 August is the month for Friday the 13th!So if you’re looking to find that perfect gift for the greedy fanboy in you I have just the thing, the Friday The 13th 30 Years of Fear T-shirt and poster set! The set comes with a limited edition commemorative T-shirt and poster featuring deliciously wicked artwork by Fright Rags superartiste’,Jeff Zornow.  Tshirts will never be reprinted or resold, once they are gone, they are gone quicker than the pulse of one of Mrs. Voorhees’s victims.  The poster of the artwork is suitable for framing, and as an added bonus, each poster will be hand signed and numbered by the stars of Friday; Ari Lehman,and of course, my supersweet friend, Adrienne King.If that wasn’t enough, randomly inserted into select packages will be lobby stills, publicity stills, or even a press kit!Certain pieces will be autographed by the stars once again including:Kevin Bacon(man, that’s a keeper), Betsy Palmer,and Adrienne once again.Look for the link to purchase this killer set on ADRIENNEKING.COM! 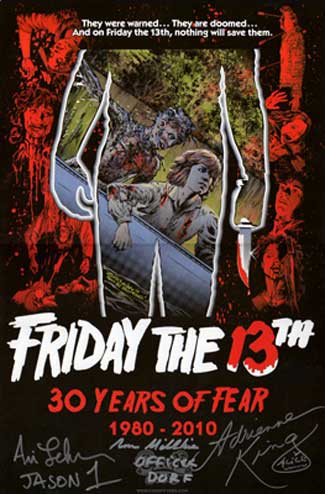 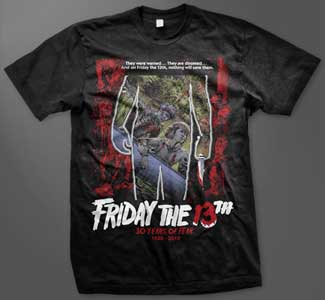 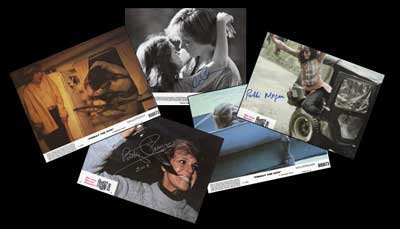 Now, I would like to introduce you to two potential pioneers in horror. Each week I will be adding someone fresh in the genre, so if you feel like you should be spotlighted, drop me a line on my Facebook page or my email, PUNKTERROR666@YAHOO.COM! 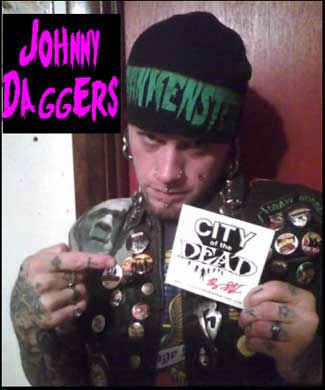 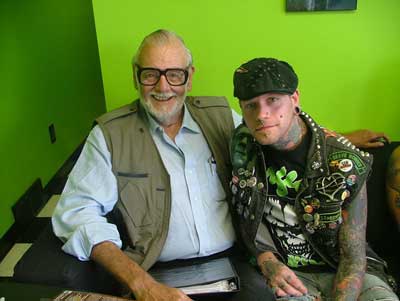 First up is Johnny Daggers and his production company, Daggervision. Johnny Daggers is a Pittsburgh native, a heavily tattooed true blue punk who resembles Rancid’s Tim Armstrong with the mind of terror mastermind,George Romero.Johnny and his company have a style all their own, a mixture of guerilla filmmaking and a true classic punk rock feel reminiscent of 80’s classics like Night Of The Demons and Return Of The Living Dead, mixed with the grainy, off beat, grainy video stylings of infamous writer for Fangoria slash controversy maker,Joe Christ. Caustic Zombies, written and directed by the Romero protege’,is Dagger’s first full-length outing.Caustic has a very simple but extremely awesome plotline, a hungry horde of zombies caused by the the Three Mile Island Nuclear Spill,and the members of a small town who have to survivee them. Johnny has a short film, Sam Hain:Night Feast, starring himself and his supercool actress friend and musician, Adrienne Disaster,which can be seen on his personal site.Along with his hungry pack of undead wolves,the aptly penned Pittsburgh Horror Mafia including the lovely and superfunny female duo of Carey Whimer and Aleesha Asper,right hand man,Mario Dominick, City Of The Dead’s Barry Stephens,also a group who is recruited into the army for just the sheer love of filmmaking not unlike the crew of John Carpenter’s 1978 Halloween crew,Daggers hopefully plans to let his apocalyptic vision loose in early 2011.Check out Caustic info on JOHNNYDAGGERS.COM and his Facebook page! 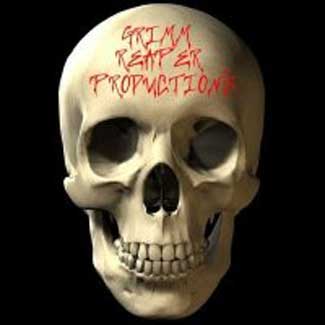 Next up is Phil Grimsley and Grimm Reaper Productions. Phil is a Wellington, Kansas native,a former naval aviation tech who has a deep love for horror that inspired him to start the company. Grimsley works as an editor,animator,and filmmaker who received his horror start by doing an intro animation for horror host,Dark Spider and her show Dark Spider’s Web which originally aired on ScreamTV. The Forbidden,directed by friend Charles Brady, and starring Daisy Owings and Taylor Lauren Galloway, is Phil’s first big independent excursion. The Forbidden is a 70’s exploitation horror inspired short film produced for Dark Night’s upcoming anthology, Evil Deeds 3. The plot is a little Evil Dead mixed with a dash of But I’m A Cheerleader,very interesting concept,involving two female lovers who head off for a weekend excursion of self awareness, only to become engulfed in a battle of survival with a murderous ancient demon. The girls also have to face their own personal demons as well. The film will wrap by the end of the week. Check out Grimm Reaper Productions on Facebook, and Phil Grimsley’s page as well for details. 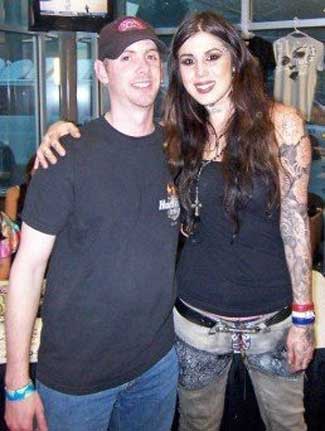 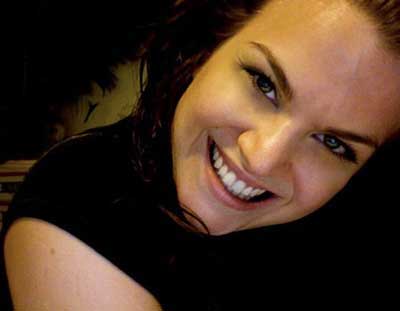 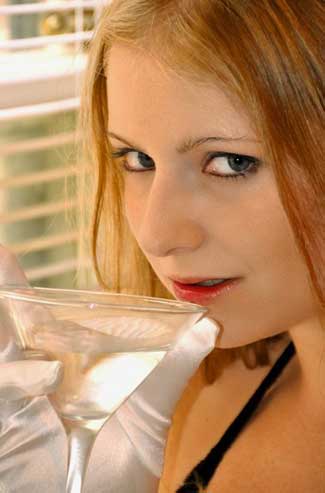 So, there you have it, another summer’s end, but hopefully you have plenty of screams and new talent to look forward to.I have so many more sights to show you in the next season as well, so open the Lament Configuration with me and let’s go to Hell together!

And remember, the only thing that can impale your dreams is your own negativity!