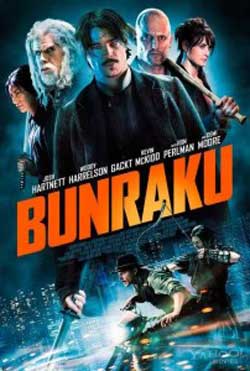 The story of a a young man who has spent his life searching for revenge only to find himself up against a bigger challenge than he originally bargained for.

I can’t remember the comedian’s name, I believe it might have been George Carlin or Bill Cosby but they did a routine on how violence is just a part of man’s nature. To illustrate they told the story of Adam and Eve and Cain and Abel. Four people on the face of the earth and one of them kills the other. Now there are only three people on the face of the earth. It’s a classic routine and one that, in a way, Bunraku takes and brings into the modern age.

The opening line of the narration says it all. “Long before the dawn of man, strife was already a major component of life.” And with those words the movie begins. The narration continues over the opening credits and that along with the brilliantly done animation make it one of the best credit sequences that I have ever seen. Funny, irrelevant, sad but true, and wholly entertaining it does a superb job of setting up not only the theme but the tone of the movie as well, which boils down to one word. 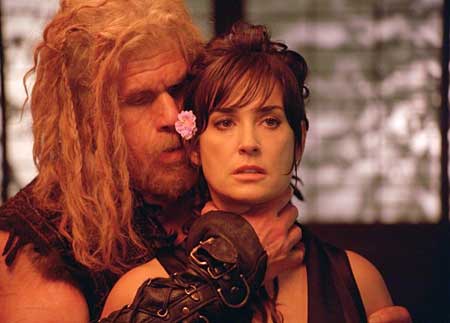 Stylized. From the visuals to the violence and everything in between, Bunraku is filled with some super cool shots and set pieces. Even the subtitles, when used, are done in a comic book fashion. And with character names like The Woodcutter, The Drifter and The Bartender, you know you are going to be watching something just a little out of the norm.

So just what the heck is this movie even about? Due to mans’ insatiable hunger for violence, guns have been banned which leaves the sword and the knife as the fighting weapons of choice. Revenge is the main motive here and the object of that revenge is The Woodcutter, also known as Nicola, also known as Ron Perlman who always seems to have a knack for portraying the dark, brooding and menacing bad guy. 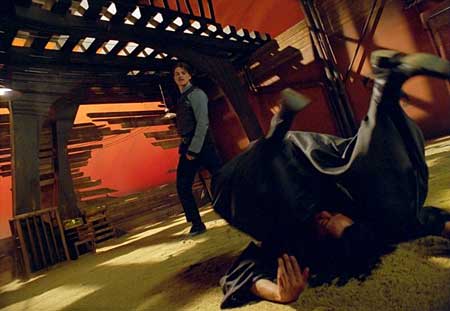 But revenge won’t be so easy. Nicola has surrounded himself with nine killers, or bodyguards if you will. These men dress in red and are very good with the blade, or any other type of weapon that might be at their disposal.

So just who is seeking this revenge? First you have The Drifter played by Josh Hartnett. This guy is fast and he loves to play a good game of cards. Then you have a young samurai named Yoshi who wants to use violence only as a last resort but given the circumstances of the world he lives in, he quickly finds that approach a losing battle. With the help of The Bartender, played by Woody Harrelson, they set out to kill Nicola. 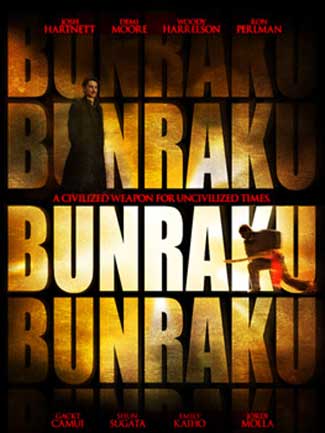 Bunraku is a unique movie and that was one of the things I liked about it. It contains lots of great fight scenes which are very well choreographed. Director Guy Moshe does a fantastic job of keeping the camera at bay and not getting too close during the action. Not many quick cuts here. Just fluid action and boy does it work. 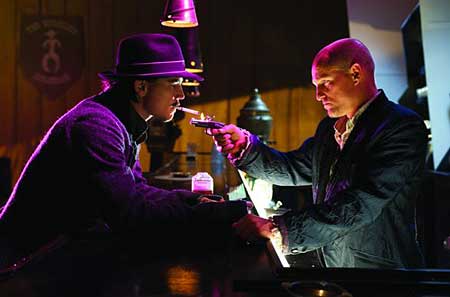 The whole cast does a wonderful job bringing their characters to life without going melodramatic, which is always a danger in a film such as this. Sure there are some “ham” moments but they sure are fun. Woody Harrelson is really the only one who for the most part plays it straight. But he also works at a bar named the Horseless Horseman, loves to philosophize and teach life lessons by way of pop-up books. My kind of bartender.

I would have to recommend seeing this movie. And though it may not be for everyone, I think most will enjoy the action, humor and overall graphic novel feel. Some will want to purchase but I would advise renting it first to see if you indeed like it that much. It clocks in at just over two hours but moves along at a good pace. It’s nice to see a film that is different from the usual fare and in that aspect Bunraku succeeds.