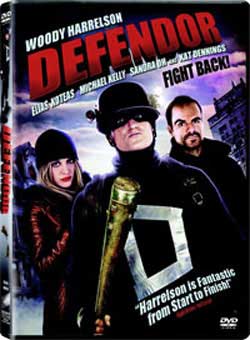 A crooked cop, a mob boss and the young girl they abuse are the denizens of a city’s criminal underworld. It’s a world that ordinary Arthur Poppington doesn’t understand and doesn’t belong in, but is committed to fighting when he changes into a vigilante super-hero of his own making, Defendor. With no power other than courage Defendor takes to the streets to protect the city’s innocents.

Defendor is his name and don’t you dare mispronounce it! The latest quirky feel-good film comes equipped with one Woody Harrelson playing the role of assumed superhero “Defendor”. Slightly mentally challenged and raised on comic books, Defendor who’s real name is Arthur Poppington is the focus of the film as the little engine that could. 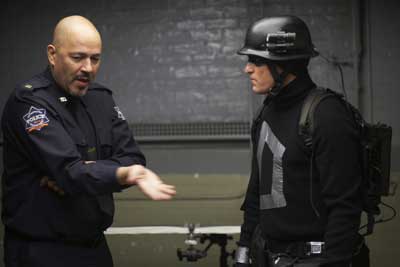 His quest in the local suburbs is to fight crime and defeat an entity called “Captain Industry”. Now Captain Industry is a preconceived entity made up in Arthur”s mind that comprises the top crime lord responsible for drugs, murder, and slavery trafficking in his city. In fact the criminal goes by the name of Kristic played by Alan C. Peterson. 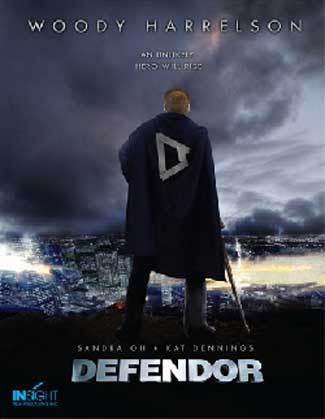 Though this is no standard crime fighter superhero tale, its more of a citizen who decided one day to don a hero suit and fight the bad elements on his own accord. His approach is confident but awkward, never using guns and relying on simple things like bees, marbles and a trench club to fight the thugs of society. Even when beaten down his spirit never seems to sway always returning to the scene of the crime to give it once last go.

When a young teenage local hooker who calls herself Angel befriends Arthur, he takes her in as an aid to his cause. Thru friendship he discovers that her real name is Kat Debrofkowitz who is a runaway from her deadbeat dad who owns a local cleaner. Kat’s street pimp Chuck Dooney is played by Elias Koteas a crooked cop who is supposed to be working the streets undercover. Though we find out right away that he is in it for all the wrong intentions and has gone bad in support of Kristic’s operation. 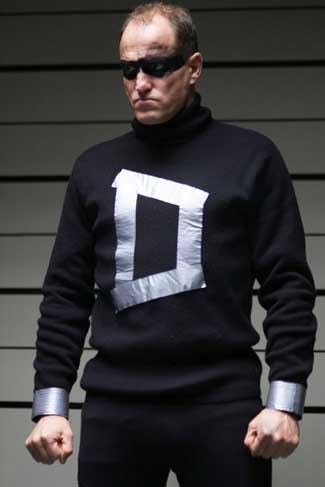 Woody Harrelson has always had a way of taking on bizarre roles that really expand his character ability. Defendor is no exception as it is built around a good vs evil premise but on a citizen level. Arthur works during the day as a traffic director, supported by his best friend Paul Carter. Paul is the closest thing Arthur has to family who’s mother died at an early age due to drugs. Arthur has since taken to this fact with an ambition to someday be a superhero. The film cleverly builds upon the notion of seeing the little guy work his way towards taking on something much larger than him. When Arthur stuffs Kat’s father into a garbage can, he is court ordered to undergo psychic evaluation by Dr. Ellen Park (Sandra Oh). 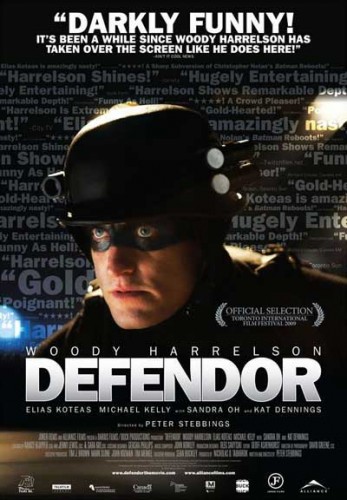 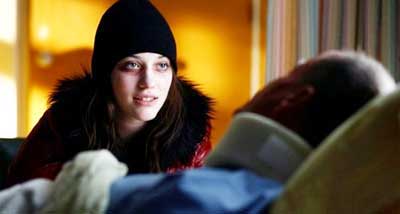 He also manages to stir up a media frenzy that focuses on the idea of a vigilante who is doing some good for the city on his own accord. The movie is directed by Peter Stebbings who has directed tons of TV episodes for a number of popular series.

The film itself feels like a family movie but the violence and prostitute dialog may be too much for young viewers. Rather it’s a good adult film that doesn’t take to extremes or very many inappropriate elements. In short it’s a safe watch for a evening of something different. In an age where superhero films are becoming a main stream source of entertainment, Defendor delivers on a smaller but more heart warming note. I myself prefer to see Woody as a bad ass as in films like “Zombieland”, but this film is just another reason why he is a top talent for trying different roles. Defendor comes recommended as a combo crime, drama, comedy and action film all in one. I enjoyed it and feel its a worthy, and cute piece of cinema for those who dig the David versus Goliath kind of film presentations.