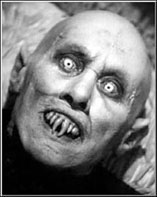 Fangs have historically been the center piece of most fictional characters. Vampires, werewolves and monsters all have them. Different size fangs and fang positions have existed throughout literature/theatrical history.

Fangs create the image of wild beasts such as bears, lions and wolves that we as humans have been fearful of for centuries.

Any type of fang has been a warning sign that that animal is carnivorous with us potentially being its next meal! So fangs to be included as a primeval subconscious fear reactor were only natural for the early authors and movie makers.

Smaller creatures such as snakes and bats have also instilled fear in us, not so much as the threat of us being eaten, but rather just being bitten by smaller sharper fangs that can inflict great pain. Snake fangs also deliver the possibility of venom which is even more the cause to avoid them. So all these natural warning signs translate into an easy to produce, fear invoking symbols.

One image that took me back when I first saw it was the image of Stephen King’s vampire in his 1979 ‘Salem’s Lot’. This image although horrifying does not hold true to the lore of 2 distinct puncture wounds being created. In fact the way that the two incisors are shown, it would make a large tear in the flesh rather than 2 separate puncture wounds. This would in-fact create a much larger blood flow than 2 separate punctures but again kind of evades the master piece of Bram Stoker’s Dracula novel. 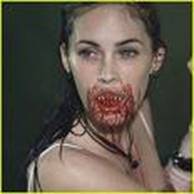 In the case of ‘Jennifer’s Body’ 2009 the character Jennifer played by Megan Fox she is demonically possessed and goes on a killing spree. Her character has rows of mid-size fangs, perfect for just ripping flesh right off the body, cleanly separating it from the bone.

Fangs in the ‘Wolfman’ 2010 or in werewolves in general will usually slightly flare out. This is so as the jaw lowers it will bring in the flesh closer if not completely tearing out a chunk.

Usually creating immense pain and bleeding it will leave the victim almost immediately immobilized in a state of shock. The bite radius will be in line with the width of the werewolf’s throat so they can bite and swallow in one quick motion. Most myths of the werewolves or lycans are the incontrollable need to feed on human flesh with no real differentiation of friend or foe. For them feeding opportunely on wild animals that fall into their path this method is also very useful when humans are not around. 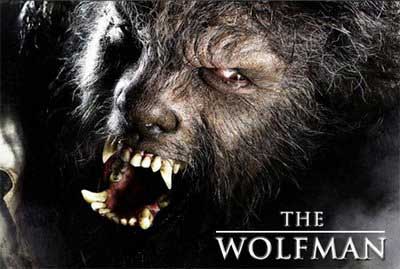 In ‘Blade II’ 2002 the secondary character morphs into a vampire hunting creature that has these incredible wide opening, lateral jaws that quickly makes its victim bleed from every section of the bite as well as makes the victim freeze in its tracks at the slightest sight of the morphing jaw. Its victims do not even have time to run, think or even react around this menacing creature. It seems to feed on the blood as well as the flesh, which would explain the excessive over kill of the jaw mechanism. 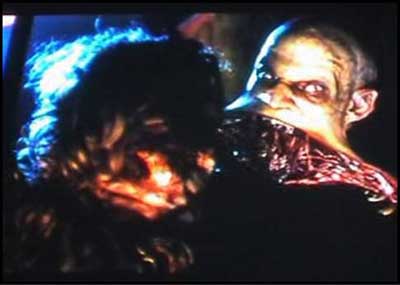 in ‘Aliens’ 1986 the creature has fangs and then some. It has an inner retractable jaw with a small row of fangs that is more like a scissor than anything but with the power to take a quick chuck out of a victim so the real jaws can start their work. The Alien holds its victim about arms reach away, the smaller scissor jaw then makes a quick powerful bite that puts its victim into shock, thus letting the helpless victim be darn in closer to be eaten with no risk to the Alien. Frankly I think the sight of this horror would have most humans cowering to the floor in terror. But then again this creature travels the galaxy looking for its next meal. 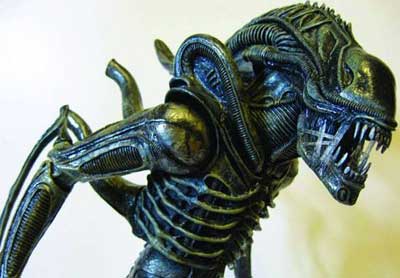 Okay, I know what you’re thinking, ‘Snakes on a Plane’ Really Brian!?
Well, yes, in fact I think it is a perfect representation of the fear of the true fang holder, snakes. What other creature who is so small, yet at the very sight of them, send women screaming, men run the other way and for the most part most are very harmless to humans. But the few that are poisonous have fangs to inflict their venom. Some of which whose venom can eat/destroy flesh in seconds! This modern day B horror movie is great for that seat jumping suspense where the only thing scarier is the other people who are sitting with you in the dark in the theater! But this film by far has more fangs per minute than any other movie on the market, making it a sure fire mention in this article. Besides who did not love the part with the two lovers trying to get into The Mile High Club who got bit on their ‘you know what! 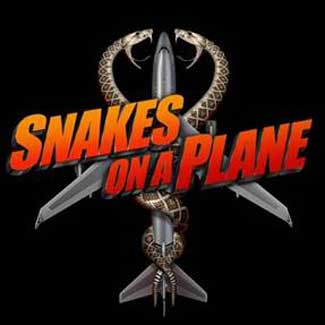