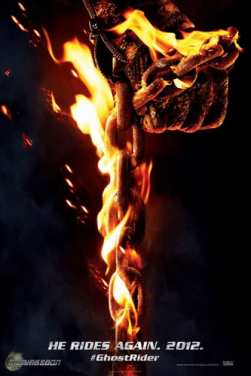 As Johnny Blaze hides out in Eastern Europe, he is called upon to stop the devil, who is trying to take human form.

OK…I was one of the select few who actually kinda dug the first “Ghost Rider“ film from a few years back. I thought that film was fun in a stupid kinda way & definitely delivered the goods in terms of action & special effects. The story was ridiculous but seriously, who among us is looking for a good story when the hero is a leather jacket wearing skeleton with a flaming head? I certainly wasn’t & I was happy with what was delivered. Apparently a lot of people felt the same since “Ghost Rider” cleaned up at the box office. It did so well that Hollywood has decided to bless us with a sequel called “Ghost Rider: Spirit Of Vengeance”. But sadly, this film is something of a mess. 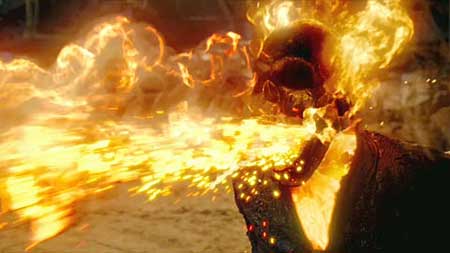 I would love to be able to tell you what this movie is really about but I really can’t since there doesn’t seem to be a cohesive plot to speak of. There is a wisp of a story regarding a young boy (Fergus Riordan) who is on the run with his mother (Violante Placido) from Satan (Ciaran Hinds). Johnny Blaze (Nicholas Cage) is recruited by a member of a secret religious sect named Moreau (Idris Elba) to rescue the boy from those pursuing him with the promise of freeing Blaze from his curse upon returning the boy. This all sounds well & good on paper but I think that the filmmakers had no real clue as to what makes Johnny Blaze so f*cking cool to start with. It’s my opinion that directors Neveldine/Taylor (Crank/Crank 2) just took on this job to show off some fancy effect work. 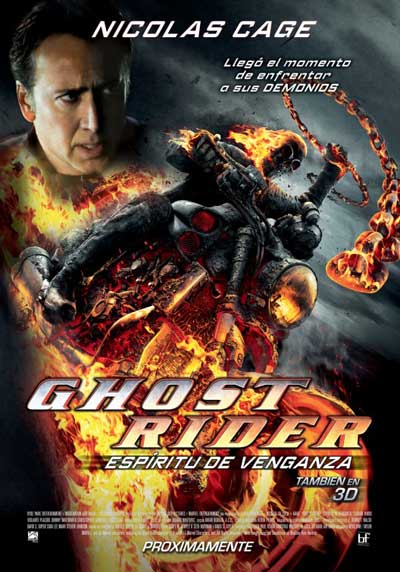 And in this aspect, the film succeeds. The rider has never looked so cool, either on paper or celluloid. He’s a frightening, feral & foreboding character that looks like he isn’t going to take any names as he’s kicking ass. Unfortunately looking bad ass does not a movie make & nearly every other aspect of this film fails miserably. The cinematography? Dark & in some scenes I couldn’t make out who was who. The camerawork seems to go out of it’s way to make this movie as shaky looking as possible. The film just shakes up & down (Especially in the opening scenes) that made me dizzy & wondering what was going on here. The acting? Hoo Boy! It’s been a while since I’ve seen Nic Cage overact on such an epic scale. He contorts his face grotesquely, laughs maniacially as he cries & tries very hard to sound like he knows what’s going on here as well. I’m nearly positive he didn’t. 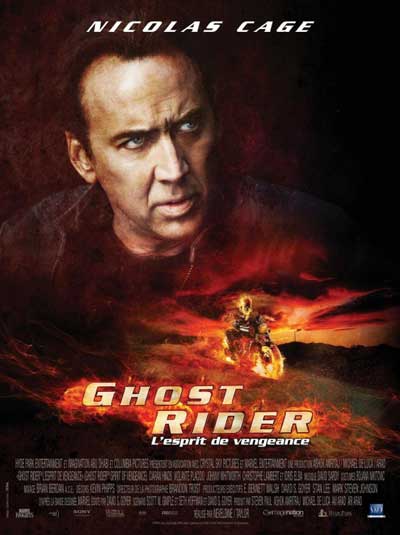 Which leads me to the story. Ahh yes, the “Story” herein…Well, it’s all about the kid (Who’s marked to be the Antichrist or something like that) & his mother running pretty much from the beginning of the movie. Why is this kid the one the devil picks> I can’t say but I nodded off for about 5 minutes in the middle of the film so maybe that’s when it was explained. But I’m not going to re watch this turkey to find out what I missed. Fuck that noise… 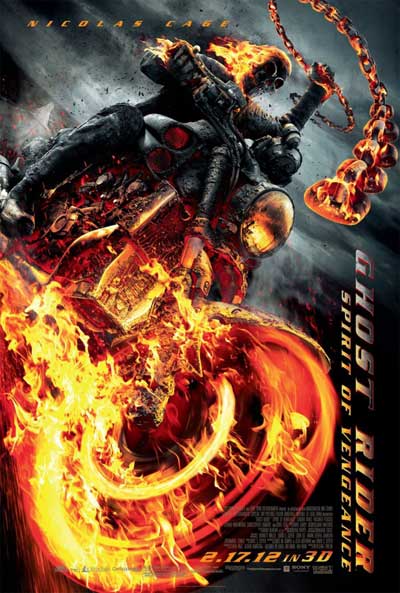 The character of Moreau is well played by Idris Elba but the faux French accent he uses here is so thick that I couldn’t understand what he was saying a lot of the time. Christopher Lambert makes a small cameo that actually livens up the film for a few quick minutes but he’s gone all too soon & Ciaran Hinds’ Satan is probably the weakest cinematic Satan I’ve seen in 30+ years. He is not at all threatening & is dispatched by Blaze in a manner that is so pedantic & ridiculous that I refuse to speak of it anymore except to say that if Blaze was created by Satan, then wouldn’t Satan take some precautions to ensure that he doesn’t have a way to defeat him? As a matter of fact, the villians in here are easily dispatched by old skull n’ bones. So easily that their appearance (When they are on screen) is extremely boring. Blaze just turns them to dust with a swing of his blazing chain. Nice effects but with no payoff to them what’s the point? 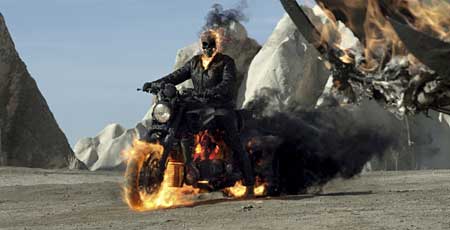 The script (By Scott Gimple, Seth Hoffman & David Goyer) is just a mess. It lurches from scene to scene with very little effort made to make it logical or cohesive. And Cage’s scene chewing was a bad joke a few years back, now it’s just a sad joke. The movie was shot on location in Romania so a lot of it takes place in empty rooms on barren streets & in some picturesque caverns but the look of the film got boring as well since there is nothing going on in the background anywhere in the film and the central characters aren’t interesting enough to engage our interest for very long. It sort of feels like an experimental film in a sense, as if the directors wanted to make some sort of “Anti” comic hero film. 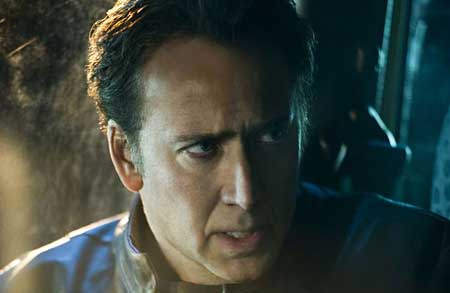 I had expected so much more from directors Neveldine/Taylor. Their two “Crank” films feature some of the most manic action I’ve ever seen in a film & I was left breathless by both of them. “Ghost Rider: Spirit Of Vengeance” left me in a coma like state that I haven’t experienced in a movie for a long time. It’s a joyless film with no laughs, little to no action & worse of all…no soul. It’s just a bunch of cool images strung together hoping some cohesiveness might win out in the end but it fails there as well. I give the film one shroud for it’s impressive effect work & nothing more. It’s a terribly boring film that will disappoint all who watch it & is essentially the worse of the “Comic hero” films that Marvel has foisted upon us. A must to avoid.

Ghost Rider: Spirit of Vengeance is now available on Bluray from Sony