A woman who lives in a darkened old house with her two photosensitive children becomes convinced that her family home is haunted.

Grace (Nicole Kidman) has been waiting for her husband to return from war. She has chosen a beautiful but desolate feeling Jersey mansion to retire with her 2 young photosensitive children. The children are unique in that they can’t be in the sunlight for very long without being hurt. This rare disease might seem directly related to vampirism, but this is no vampire movie. The children simply had the unfortunate luck of contracting a rare form of ailment. Though due to this the children must restrict themselves to a rudimentary life filled with a set of strict rules they have to abide by. 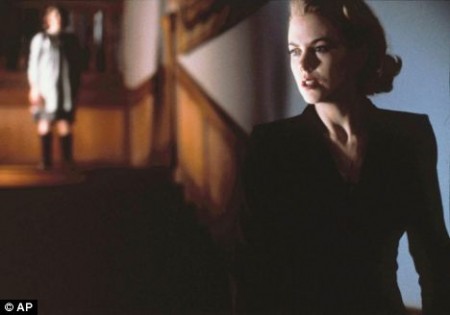 As Grace gets acquainted with the new residence, it becomes apparent that she can’t take care of the kids AND a mansion sized home all on her own.

She hires on a small group of servants. They consist of Mrs. Bertha Mills (Fionnula Flanagan), Edmund Tuttle (Eric Sykes), and Lydia (Elaine Cassidy). Though shortly after Grace begins to experience a number of unexplainable circumstances. As she enters a room, doors slam, noises are heard above without cause, and things like the curtains disappearing begin to convince Grace that perhaps the house is haunted.

As the film progresses it becomes clear that alot of things going on are stranger than one would expect. In fact, it might seem like the story is suffering from too many holes, and moments that don’t add up. Though as they say …all will be revealed in time.

Nicole Kidman gives one of her best performances, which also has received accolades in her role as Grace Stewart. Her often snide and prudish persona seems to fit comfortably within the framework of this unique haunting tale. 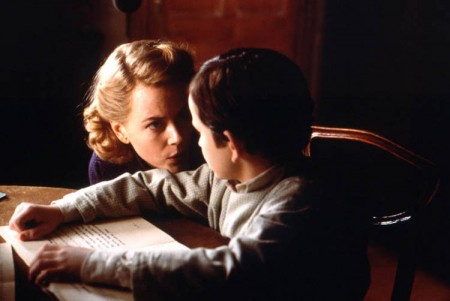 What works in this movie is its ability to stack clues and hints of something not yet revealed building carefully on tension and driving us to the finale. The element of horror is kept very cautious and subtle but yet still builds upon the fears of the supernatural while doing so. Alot of the unseen and audio ques help to elevate this notion bringing on a believable fear within Kidman’s character. 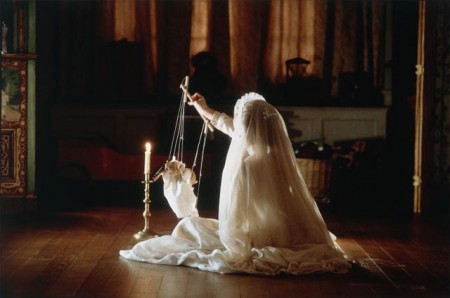 The movie was inspired by the novel The Turn of the Screw, and a re- adjustment of the 1961 film ‘The Innocents’. Though for some reason, I vaguely remember another old black and white movie that also ends on the same twist. At the moment I cant place it, but I distinctly remember watching it several times when I was younger. The ending which is the punch line to the whole premise has been compared to “The Sixth Sense” at least in a similar M. Night Shyamalan fashion. Though my connection was Amenábar’s sense of building his story on previous events that come full circle ein reveal. 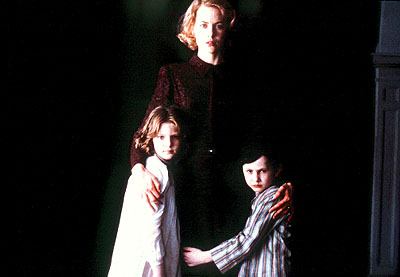 This movie has often been praised for its sensitivity and representation of the after life. Amenábar has really given this film some thought which shows in the overwhelming response it has received from the horror community. Beyond it’s genre it’s an absolutely remarkable picture that combines an intelligent script with the trademarks of a clever twist and build that seemed to stick with viewers beyond the scope of the movie. It’s gothy eeriness aligns with the setting and tone of the house itself often instilling a certain coldness into its premise.

Wiki lists the following in regards to the films success within the cinema community:

The Others won Best Horror Film at the Saturn Awards with Kidman receiving a Golden Globe and BAFTA nomination. It has also won 8 Goya Awards, including awards for Best Film and Best Director. The Others is the first English-language film ever to receive the Best Film Award at the Goyas (Spain’s national film awards), without a single word of Spanish spoken in it.

“The Others” is now available on Bluray per Lionsgate Home Entertainment