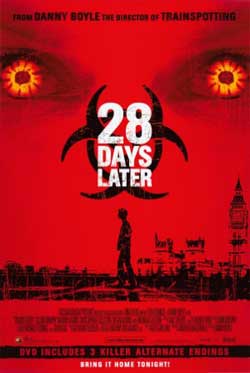 Four weeks after a mysterious, incurable virus spreads throughout the UK, a handful of survivors try to find sanctuary.

Taking on a film like “28 Days Later” is more like an invitation to write about what makes a great movie. And let’s make no mistake. “28 Days Later” is a great movie! I wouldn’t say that I’m surprised or that you should be as director Danny Boyle has always been somewhat of a crowd pleaser. Looking back on his career with titles like “The Beach”, “Shallow Grave” and “Trainspotting”, it’s pretty apparent that his track record has faired well. Though we come upon the subject of a zombie film, that’s NOT a zombie film…that is! Let’s be clear…”28 Days Later” has inspired a generation of genre living dead films without actually being “completely” one itself. Technically it’s not, but appearance and presentation-wise it is. 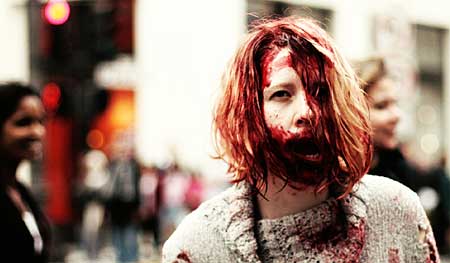 Maybe an introduction into the story is necessary. Jim (Cillian Murphy) wakes up in a local hospital located in the UK. His stupor and intrigued discovery reveals that the town of England is practically empty stemming from an evacuation. This occurs 28 days after a violent viral infectious outbreak has run its course across the globe. We are told that the virus is in fact called “Rage” which infects when entering the blood stream. The virus attacks the nervous system and is in full active mode within 10-20 seconds. Let’s also be clear, this is not the dead waking up or reanimating, its a virus that turns normal citizens into mindless savages. They do not seek out flesh to eat but rather to destroy and rip apart. 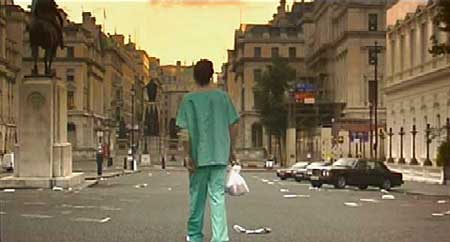 However, maybe we need to back things up a bit. The story begins with an origin. A small group of 3 activists invade a science lab in the effort to free locked up animals who are being experimented on. Though what they didn’t count on, was that a few have been injected with a viral called “Rage”. The experiments were in the pursuit of looking for a cure. As the activist carelessly let the monkeys loose, they are attacked in effect starting the whole she-bang. 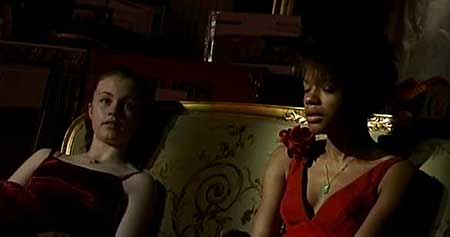 Jim, now 28 days later has to make sense of it all has he treads thru the city. Jim, makes his first discovery when he enters a local church that house of a few of the rage victims. Lucky for him, he meets up with Mark and Selana (Naomie Harris) (survivalists) who can fill in the gaps. He is told that the present is without government, police, military and radio. As the 3 move forward they discover a survivor names Frank who is stocked up in an apartment with his daughter. They encounter several of these rage savages along the way making for great cinema and thrill-filled action. It is decided that they head towards a location called the 42nd blockade when they pick up its replaying broadcast urging survivors to seek salvation.

Though while the blockade does provide safety and sanctuary, they find that it’s other matters within that don’t quite fit into their agenda. Commanded by Major Henry West, a team of militants have constructed a fortress housing its soldiers and their toll on life. Jim, a victim of a violent world must come to terms with reality and the occasional moment of peace.

For actor Cillian Murphy, “28 Days Later” stands as one of the first noted films featuring him in a lead role .With Murphy being a well established highly visible actor these days, many tend to forget his earlier appearance in this fine zombie-genre thriller.

“28 Days Later” has many things going for it, that combined, really add to its success. For one, we have a great soundtrack by John Murphy adding a tonal ambience to the whole production. (This later went on be a successful score soundtrack) We have Anthony Dod Mantle providing great cinematography along with Chris Gill doing all the fine editing work. Speaking of editing, part of the films noted look was created using a camera technique called “fast shutter speed”. This was in fact the style given to the kinetic infected during their attacks providing the footage with a surreal and gritty cinematic tone. 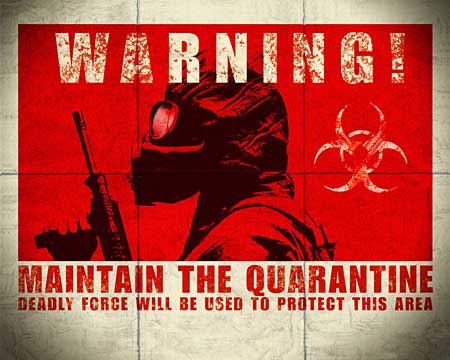 It probably needs to be said that this approach in camera and using highly vicious mobile infectants became much of the inspiration for several zombie films that followed after…more notably “Dawn of the Dead” (2004).

Another observation is the use of sound which elevates in dynamics and impact during the key action scenes. A calming runs apparent thru much of the movie leading up to rapid fire bursts of sound, score and movie elevation.

“28 Days Later” not only appeals to a genre placement, but also tends to address the realities of a world pandemic. This is used in subtle ways such as the preservation of water technique and the visuals of rotting fruit which are only 4 weeks old. In some ways it foreshadows a potential bleak future for us if ever a viral outbreak was to take its toll. 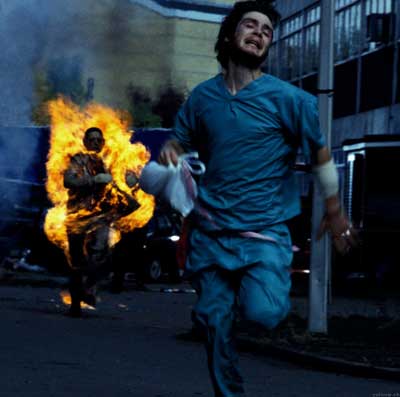 “28 Days Later” embraces its violent tone but only when appropriate leaving room for tranquility and calming that works beautifully with its premise.

As mentioned in the interim, “28 Days Later” has set a new standard for zombie /infection films. Danny Boyle walks away with another slam dunk and the horror genre gets a push in a new direction. An important film to our history of cinema and a compelling watch none the less. 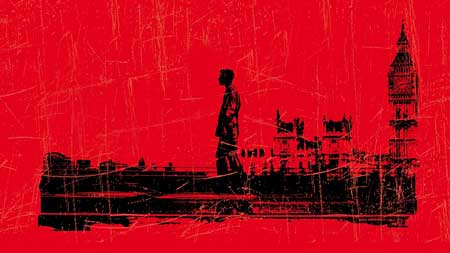 Fun facts: per IMDB –
For the scenes in London, poilce would close the roads at 4am and filming would begin immediately. It would last for one hour, and at that time the police would reopen the roads. As well as having to deal with traffic, the producers also had to ask clubbers to find alternative routes home. In terms of the traffic, the producers correctly predicted that asking drivers to either wait for up to an hour or find another way might cause some considerable consternation. As such, they employed several extremely attractive young women (one of whom was Danny Boyle’s daughter) to make the necessary requests. This plan had the desired results, as the drivers responded quite amicably to the young girls

– Ewan McGregor was the original choice to play Jim. After that didn’t work out, the role was offered to Ryan Gosling, but although he was interested, he could not commit due to a scheduling conflict.

– The tunnel scene was filmed in a new tunnel extension which the filmmakers had special permission to use.