Film Review: Conquest Of The Planet Of The Apes (1972)

“Fourth feature in the simian series has apes domesticated and turned into work slaves in the near future. Along comes Ceasar, son of Cornelius and Zira who died in the third film, who leads his chimp brothers in rebellion against the human oppressors, thus creating the time loop that leads to the first film.” (courtesy IMDB)

The fourth film in the Planet Of The Apes (1968) series was entitled Conquest Of The Planet Of The Apes (1972) and was directed by J. Lee Thompson, the British director whose previous credits include The Guns Of Navarone (1961), the Wernher Von Braun fiasco I Aim At The Stars (1960), the original Cape Fear (1962) and the under-rated comedy John Goldfarb Please Come Home (1965). 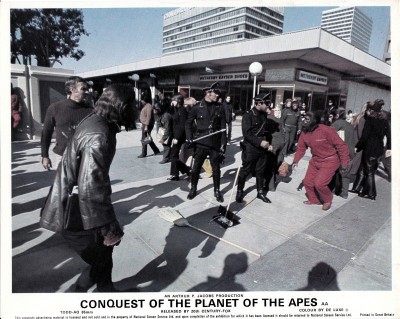 The scriptwriter was again Paul Dehn and the story concerns Zira’s son Caesar as a young man, or rather young ape (Roddy McDowall) and his struggle to lead a revolution by apes against their human oppressors. Throwing science out the window, Dehn explained the sudden access of intelligence on the part of the world’s ape population by saying a plague had wiped out all of humanity’s usual pets, so the apes were used as substitutes. He once told me, “It was found that they could be taught to do simple things, and being apes they were far more intelligent than dogs, so very soon they began to do much more difficult things like bed-making, cooking, sweeping, and they became the servants of mankind – slaves.” In other words, if you take a gorilla out of the zoo and set him pottering around the house, in a few years he’s going to be doing newspaper crosswords and forming trade unions.

Anyway, Caesar is horrified by the mistreatment of his fellow apes, and inadvertently voices his frustration. In order to protect the young ape, his guardian Armando (Ricardo Montalban) must turn himself over to the authorities, headed up by the cruel Governor Breck (Don Murray). When Armando dies in custody, Caesar decides that there can be no redemption for humanity, and leads the ape slaves – gorillas, orangutans, chimpanzees – on a violent rampage through the city that culminates in a call for peaceful coexistence (the recently restored version features the original ending, a bloodbath that spares none of the city’s ruling elites). 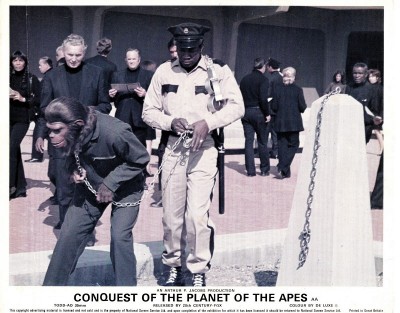 The over-riding theme throughout Conquest Of The Planet Of The Apes is the point that Dehn is trying to make about slavery and oppression, and I think he does a pretty good job of drawing us in. Coming as it did on the heels of the civil rights movement and racial unrest of the late sixties, and with the ape revolt staged to resemble real riot footage, it’s clear that director Thompson was onboard with this too. But it does raise questions about the appropriateness of having simians as stand-ins for African-Americans in a racial analogy, even when one of the sympathetic human characters is black (Breck’s assistant is played by Hari Rhodes). 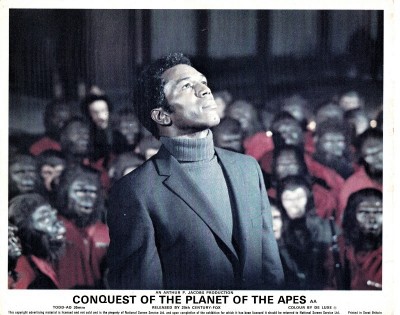 Although designers Philip Jefferies and Norman Rockett were forced to cut corners where they could, they were successful in creating an ‘Ape’ film that looked like no other. This could never have been achieved without access to 20th Century Fox’s vast collection of props: The jumpsuits worn by the apes were leftover costumes from Voyage To The Bottom Of The Sea; the Ape Management’s insignia patches and computers are from The Time Tunnel; the large set that comprised Ape Management (where apes are processed and trained to become docile servants) is a re-dressed set from City Beneath The Sea; and Governor Breck’s throne was first used in Taylor’s spaceship in the original Planet Of The Apes, striking similar to the chairs used in Land Of The Giants.

In terms of performances, Conquest Of The Planet Of The Apes is solid almost across the board. McDowall in particular turns in his strongest work, with Caesar’s character calling on him to convey pathos, guile and rage. Also worth mentioning is Ricardo Montalban, who already earned our sympathy in Escape From The Planet Of The Apes (1971) and does so again with limited screen time. 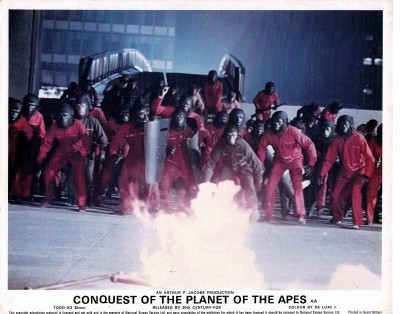 Don Murray’s Breck is cut from the same bigoted cloth as James Gregory’s Ursus in Beneath The Planet Of The Apes (1970). He lacks some of the nuance that typified previous ‘Ape’ antagonists, but still gets some nice monologues, like near the end when he tells Caesar why men enslaved apes: “Because your kind were once our ancestors. Man was born of the ape, and there’s still an ape curled up inside of every man. The beast that must be whipped into submission. The savage that has to be shackled in chains. You are that beast, Caesar. You taint us. You poison our guts!” 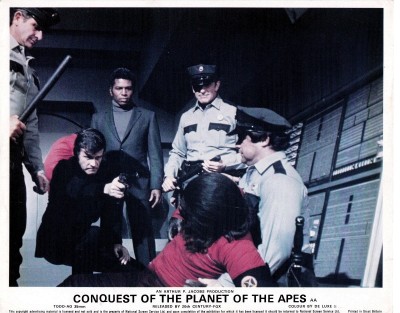 Caesar and his ape revolutionaries win their fight and end up ruling the world, but when his old friend the circus owner passes away, Caesar has a change of heart and prevents his fellow apes from destroying the humans, telling them that the human race will eventually destroy itself in a nuclear war. Even as social satire or political allegories, Dehn’s ape stories leave a lot to be desired, and they operate on a very juvenile level. The level dropped even further in the fifth and last film in series, Battle For The Planet Of The Apes (1973), but that’s another story for another time. It’s on that rather downbeat note I’ll thank Cinefantastique magazine volume two issue #2 for their kind assistance in researching this article, and ask you to please join me next week when I have the opportunity to punch your ticket for another terrifying train trip to Tinseltown. Last stop – Horror News! Toodles!