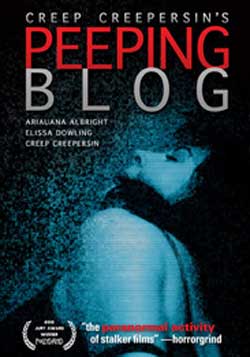 A stalker follows some woman around recording everything that she does with a video camera.

While I am sure that it is going to be hard for some of you out there to believe it, I do try to say something nice about the movies that I review no matter how terrible they were. I just couldn’t do it this time around. I respect the fact that there are many filmmakers out there busting their butts to make a movie with little to no money while having to use unreliable friends, family members, and coworkers as actors. I’ve been there and done it than I would care to remember and basically have nothing more to show for it than a couple of trailers for films that never saw a final cut for whatever reason and a couple of short movies that I only gave to family and friends. I love low budget horror films, and admire the folks who put their heart and soul into them to get very little in return (as well as a bunch of assholes online talking smack about their movie). Basically where I am going with this is that if you put effort into your low budget film that is cool, but if you just half-ass something and call it a movie there is a difference. “Peeping Blog” is an example of the latter, and I am pretty damn hesitant to even call it a movie to be quite honest about it.

The movie is shot from the perspective of the weirdo operating the camera who is stalking the woman. Basically the entire movie is just him following her around and recording her doing random things. The woman isn’t even in all of the “scenes” that he is filming so he just around waiting for her to show up and records whatever is around. As a result, we get way too many shots of interesting things like the front of a building, a traffic light, and the stalker sticking a Hot Pocket in the microwave (why would he film this? I have no clue). These scenes go on way too long and I don’t know if Creep Creepersin (the writer/director) is going for a Warhol thing here or what, but the results will put most people in a coma from boredom. I mean I am all for people attempting to be out there and all, but I think that there are times where you can try too hard.

Did I mention that there is no dialogue? Well, there is, technically, but it is from a distance and is very hard to hear. The scene with dialogue is very short (way shorter than the ones where we are staring at a wall while nothing else is going on) and pretty much adds nothing to the plot (wait, is there a plot?). I don’t know about the rest of you out there, but I personally like movies to have some sort of verbal exchange between the characters. Again, I think that the lack of dialogue is an attempt to be artsy, and while it does work in some films (such as shorts that run less than five minutes) it fails miserably in this particular case.

Needless to say, “Peeping Blog” is a terrible movie. I am sure that the people behind it would argue that I just didn’t get it, but in my opinion there really isn’t anything about it to get. Unless you enjoy watching long, pointless scenes of someone sitting at a stop light then this film is not for you. To be honest, I don’t really know how I made it through the entire thing without fast-forwarding or skipping to the next scene several times while I was watching it. I really do believe that this film is an example of someone just filming whatever and then sending it in just to see if someone would review it. I know that this review may sound rather harsh, but since I recently read a quote from Creep Creepersin where he stated “I don’t care if anyone watches my movies, as long as they know I’m making them!” I really doubt think he is going to be too bothered by this review. Skip this movie totally unless you need something to help you fall asleep.