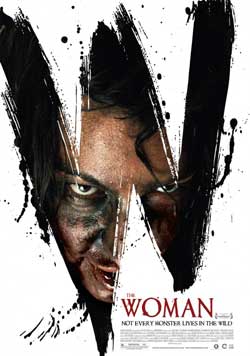 When a successful country lawyer captures and attempts to “civilize” the last remaining member of a violent clan that has roamed the Northeast coast for decades, he puts the lives of his family in jeopardy

Don’t Forget to check out the Trailer for “The Woman”

By now you’ve probably seen the posters or caught wind of this new up and coming feature. Featuring the simple title of “The Woman”, it stars Pollyanna McIntosh as a feral hunter-wild-woman who is discovered by local family man / lawyer (Sean Bridgers) Chris Cleek while out hunting.

Reports come in, that “The Woman” is “the” shocking film to see this year, and I have to agree.

The initial capture is a little bizarre as you might be wondering “who” actually sets out to capture a human…..let alone a dirt covered beastly female. Though we begin to enter into the world of the Cleeks which on the surface seems pretty “Leave it to Beaver”. Directed by Lucky McKee, we sense right away that this film has a distinct purpose that Mckee is reeling us up for. This purpose is cleverly woven in with timing and build. 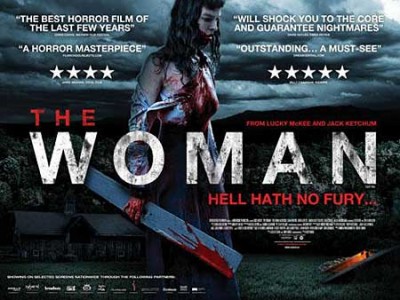 When Chris orders his family to clean out the barn, many probably aren’t expecting him to rig up an elaborate pulley system that keeps his newly found captive bound and chained like a fresh kill. Chris seems to have a thing for pets. Especially ones he thinks he can train to be civil.

Chris has other plans for this beautiful, but almost evil looking-at-times captive. Like a pet owner breaking in his prize, he feeds her, bathes her and spouts off a few life lessons to his family in the process. 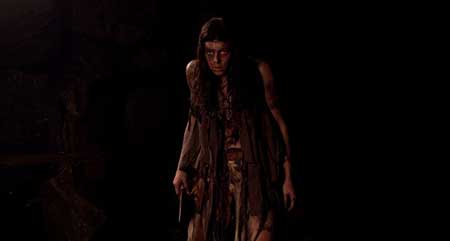 This strange “perfect” persona that the Cleeks try and exude is quickly overshadowed by a deeper troubled foundation.

Angela Bettis stars as Chris’s wife Belle Cleek who we sense right away lives in a certain fear. Her almost expressionless stature gives her away that something is not all that cozy living with dictator Chris. Meanwhile their daughter Peggy (Lauren Ashley Carter) is having trouble at school mostly in her sudden reclusive nature that is noticed first by her teacher Genevieve Raton (Carlee Baker). 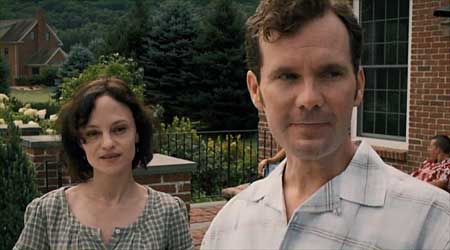 “The Woman” installs pretty early this sense of this “all has to end badly”. We are only given limited information in bits which start to culminate into the direction of the premise. An inevitable reveal and confrontation on the values of right and wrong simmer slowly into a stunning climax.

While you’ll read that “The Woman is shocking, vicious and unsettling, it’s the way it all comes together that really sticks to your gut. In fact, its brilliance often arrives in what little is spelled out that translates into the full picture. It’s in its third act that we get the full gist of where this is all leading with a heavy accent of what and why. It could be argued that we never learned the details of every piece leaving a smattering of holes. I believe the true cinemaphile will read between the lines and make the right assumptions of what’s been brewing in the Cleek household. 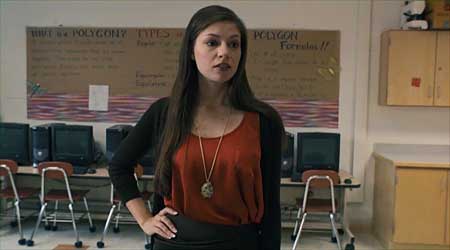 Our captive gets her day in the sun presented in the most viscous ways possible. Mckee knew full well that violence was a major product of his storyline, though retribution is not a polite avenger. Somewhere in all this bloodshed is a quaint story about the secrets we keep, the lives we create and the actions not taken. They arrive in the form of a wild eyed warrior who doesn’t need to speak our language to know what’s really going on and how to fix it. 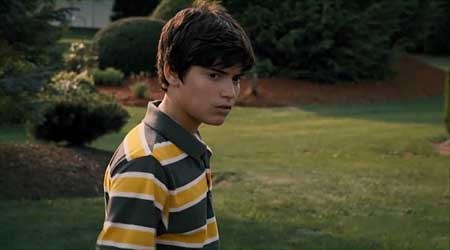 A perfect union of horrific consequence and urban bliss, The Woman is quality horror wrapped in a stark tale that will leave you breathless.