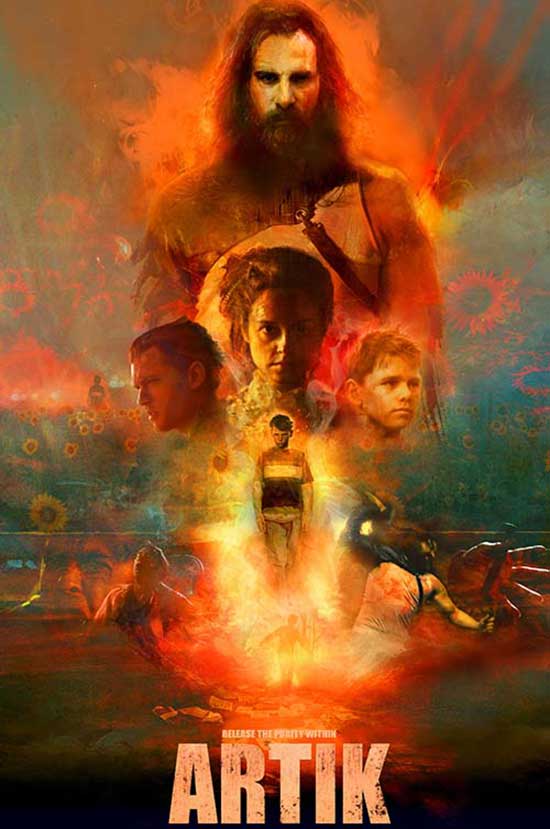 A comic book obsessed serial killer teaches his son how to get away with a series of brutal murders until the boy befriends a mysterious man who threatens to expose everything.

Epic Pictures continues to release a whole slew of original horror films that range the gamut in subject matter and intensity. “Artik” is no exception coming to the table with a heavy helping of brutality and melancholy all rolled in one. Artik is one of the latest releases from the team at Epic Pictures written and directed by Tom Botchii Skowronski. Tom has directed various horror themed short films leading up to this 2019 directorial debut.

The film “Artik” is a bit of a strange beast in itself making use of a rather poetically articulated form of dialog often used by the main character when speaking. I say this because the main focal character “Artik (Jerry G. Angelo) is a bit of a enigma wrapped in a savage package. The script does not exactly run parallel with the action often citing bits that are more reminiscent of metaphors of wisdom directly aligned with the violence and chaos that follow.

Artik himself is simply a deranged serial killer who believes his own agenda. One who also enjoys creating comics while bringing his latest victims back to his lair self-named “the magic room”. Essentially it is a workshop shed where his latest casualties are brought in to cover in plastic wrap and bind to his rather crudely constructed upright torture chair.

This is followed by bit contemplative curiosity that appears to flow out of him as he questions the acts he just committed. It is not entirely clear, if it’s meant to taunt the victims or if it’s just a result of his own self disillusioned form of insanity. His family which also appears to be subjectively deranged by association are clearly in on the activities to the point of supporting his efforts and acknowledging his deranged actions.

Artik’s son who goes by the name of “Boy Adam” has been reluctantly enlisted for serial killer training at a young ripe age. His designated keeper, Artik, begins to include Adam in his activities which include: training him to crush a skull with a mallet, torture methods, and various acts of violence. Apparently he has been instructing him on the techniques for getting away with murder.

However, help arrives in a most curious form as an older acquaintance befriends Adam while he is in the process of graffiti. Holton (Chase Williamson) takes a special interest in the boy whom he recognizes for having the wrong mix of social signals. A recovering victim himself of an abusive family, Holton tries to come to the boys aid by informing a local counselor to pay him a visit.

As a former artist myself, I quite enjoyed Artik’s pencil drawn framing techniques that appear to be a sort of self narrated story-boarding of his own activities.

The film is primarily centered at Artik’s farm where him and his family carry out a strange agenda fueled by their own views on reality. To contrast this, the violence and chaos act as paradoxal points centered within beautiful patch of sunflowers that surround the farm.

As the story progress it begins to take form with Holton becoming the inspiration that Adam needed to escape his unfortunate path ahead.

Artik, as mentioned, has a rhythm to it, that is unlike other films of its genre. The set uses the combined elements of beauty and distress acting almost as a metaphor to the choices that Adam is faced with. Holton is an unlikely hero which mirrors the dialog and ideals mentioned by Artik. I see this connection as intentional rather than a coincidence.

In all, the film features some heavy brutal moments that never really get to the point of being too over the top (compared to much of the torture p*rn films of past). The run time here is quite shorter than usual but appropriate to what really matters in this film. I enjoyed the presentation of it all combined with some unique elements and script writing that are clearly off the beaten path. A recommended piece worthy of your time, “Artik” is surprisingly unique and powerful.

Artik is now available on blu ray per Epic Pictures