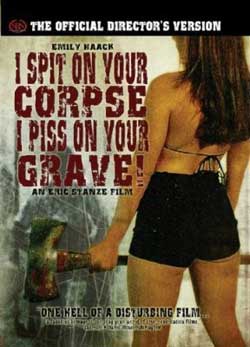 Sandy has stumbled onto a lair of torture and humiliation. She was abducted and brought to this pit of pain as the next intended victim. But Sandy overthrows her captor and kills him. Does she release the other prisoners? Does she call the police? No. Her mind snaps and she assumes control over the prisoners, taking them as her own playtoys. Naked bodies writhe in ecstasy as blood runs down the walls in this chilling tale of madness and revenge. I SPIT ON YOUR CORPSE, I PISS ON YOUR GRAVE is a swirl of insanity, a carnival of carnage, a festival of filth, and an onslaught of sleaze!

From the studios of Sub Rosa Extreme and the mind of controversial filmmaker Eric Stanze arrives a film that by title alone might raise a few eyebrows. Now I haven’t seen any of the other titles out of Sub Rosa, though from what I gather they are all down the line of exploitation and extreme horror. This feature which barely passes the 1 hour mark may not appeal to a majority of the horror genre. It does however fit into the extreme horror category nicely. As you can guess from the title it is a revenge film that takes a slight inspiration from “I Spit on Your Grave”. It stars actress Emily Haack who should get an award for just agreeing to a constant level of on screen abuse and nudity. Though perhaps this film might fit her interest better than others with the fact that most of the film features her as “the” abuser. Emily Haack plays Sandy, a girl who has had to deal with creeps all her life. A boss that makes unwanted advances, a friend that asks for too much and a a date that gets her drunk enough to rape, are all part of her legacy. When she stumbles upon what they are calling a lair, or a decoy location that is set up by her former boyfriend convict Kevin (Scot Spookytooth), it is not the romantic union she was expecting from someone she cares about. Since the film runs short (and most likely with a lower budget to work with) alot of the narrative is told per a close up of Sandy herself. This brings us up to speed and fills in the holes without creating more footage. 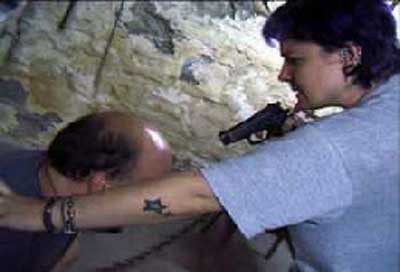 In any case, Sandy is surprised when kidnapped by Kevin, who she is “supposed” to be meeting for a romantic rendezvous. Kevin has spent some time in jail and has provided her with his version of a gift. In his basement sits the 3 men who have caused her grief in the past. Though Kevin has other plans for Sandy which leads to a violent confrontation.

Now, in the spirit of revenge, Sandy has her chance to afflict pain and suffering upon those who wronged her in the past. This leads to some pretty extreme moments. I wont go into all the details, but it’s pretty apparent that pain and humiliation take a big part of her plans for the group of men. In fact, these scenes alone add a whole dimension to the film itself. Sandy seems to be enjoying her moment as the woman empowered. Even when taking a break to cool her thoughts, she returns with more deviant intentions. I will mention that Emily Haack gets a pretty racy scene that involves her self penetrating herself with a broom handle for about 5 minutes. With this alone it takes the presentation way past a simple nc-17 rating as we get close ups of full stick into crotch action. 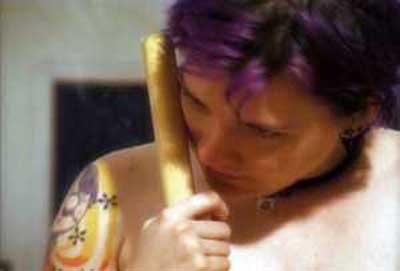 The act though does have a narrative purpose, that might not be clear to shocked viewers. At the end of the day “I Spit on Your Corpse, I Piss on Your Grave” is about woman empowerment which might get overshadowed by the violence and sexual moments. Eric Stanze has created an underground piece that hits upon certain needs for “that” segment of the horror genre. I wouldn’t say this is one of his better pieces, though it is simple and serves the purpose of the scripts intentions. Viewers will most likely criticize the film for its boring moment consisting of long lethargic shots of graveyards, local buildings and scene to scene transitions. I would say just skip to the 3rd act and you’ll get what you came for. The movie has a suitable level of tension and does indeed disturb. If a low budget revenge film with alot of nudity is your thing, then have at it. Though in this case, men might cringe a few times once they get a taste of Sandy. 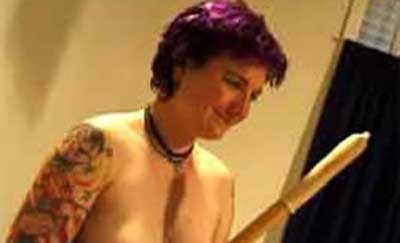