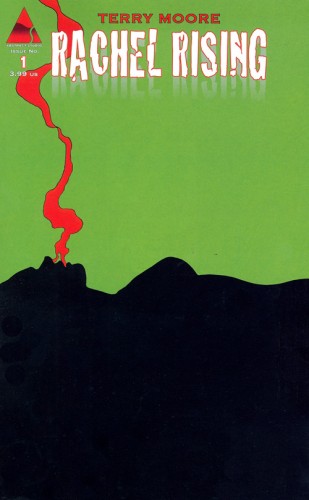 After the gripping epic science fiction series ECHO, Terry Moore (the man who also created the magnificent Strangers in Paradise) is back with a journey into yet another genre with the first issue of RACHEL RISING, a new horror series. This first chapter in the story really does whet your appetite for what is to come, and acts very much like a movie trailer does. Not a great deal happens in the issue, but pieces are put into place for the story to unfold over the months to come.

Featuring Moore’s customarily beautiful black and white artwork (The only person in the industry that comes close to Terry Moore’s skills with drawing women and convincing facial expressions is Liberty Meadows/Shanna The She Devil genius Frank Cho) and a sparse, eerie few scenes, the first issue of RACHEL RISING bodes w 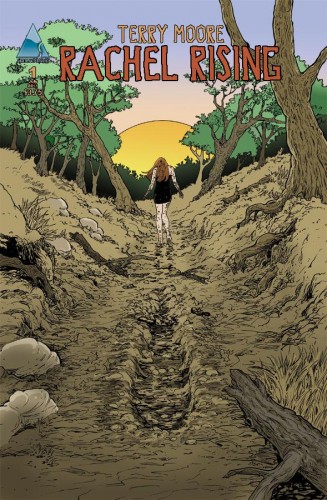 ell for the future.

While this opening chapter is very light on dialogue and seems to end rather abruptly, there is more than enough to have readers picking up the next issue. The opening pages, depicting the moments that the titular character rises from her makeshift grave, are gorgeously rendered in stark lines and fascinating detail. In fact, there is one splash page that really must be taken in for a while before moving on, such is the detail and beauty of it. You can see from the two versions of the cover here, his style continues to evolve and mature.

I hope that future issues of RACHEL RISING bring in the humour and pathos of Moore’s writing along with the frights. Such a creator is the perfect choice for a horror/supernatural tale, as he has the talent to offer characters that the reader cares about, which adds a great deal of power to each page as the drama unfolds. On the strength of this issue I shall certainly be picking up the rest. As with everything that Moore has created thus far, you really won’#t feel short-changed by buying this.