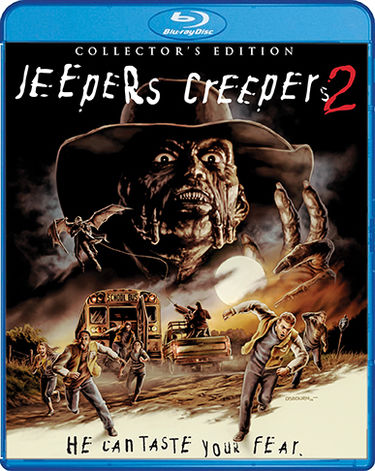 Set a few days after the original, a championship basketball team’s bus is attacked by The Creeper, the winged, flesh-eating terror, on the last day of his 23-day feeding frenzy.

With a successful first run, the Creeper has returned with an appetite. We begin with a helper title card that announces “every 23 years he gets to eat for 23 days”. As we know, the Creeper has a pretty good appetite. His new prank seems to be able to blend in with scarecrows and attack expecting victims. JC2 starts off with a pretty good intro. As a local farmers kid checks his scarecrow poles, he notices something strange hanging off of one. Attacked by the Creeper, the boy is taken while his family is forced to watch. And so it begins again. 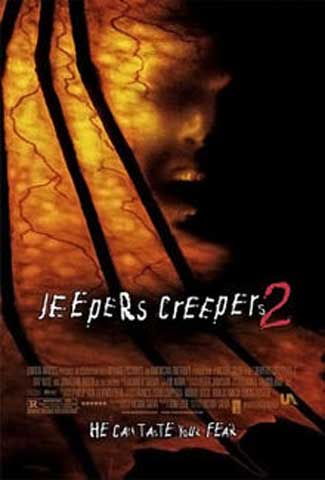 Beginning it does….. as a traveling school bus full of jocks in mid transit from a championship game are in route. Down that familiar highway 9, they develop a flat tire that seems to be caused from a rather odd looking bone-throwing-star of some sort. The device is questioned but only enough to toss it to the side and get back on the road. Though the Creeper has other plans as he later flattens another tire leaving them stranded. To bring you up to speed, those plans include mainly feasting and replacing a few body parts.

The stranded bus full of passengers sets the stage for the Creeper to swoop down and start plucking victims left and right. The act never really reveals “where” they are taken just that we assume some food nest of sort. Now a bus full of jocks usually means annoying bickering especially when faced with being eaten. As expected, they quarrel and bicker most of the time while battling the demon the rest. The quarrels get a bit old and probly too much directive drama than reall need be.

Creeper plays with his food a bit by doing a few guest appearances. Upside down, sideways and looking thru the ceiling, he taunts and points at those who fit the bill. This is all great and creepy but possibly a bit “too much” reveal for the any real tension to arise. We start to grow accustomed to him looking in which sort of spoils the broth a bit.

The film is cleverly set a few days after the initial movie, as we hear reports about the house of pain and church location being discovered. Where are now is the last day of his 23 day sprint. So there is no time to waste.

Victor Salva directs this sequel to his hit movie but fails to win over fans in the same fashion.  With a release that went to theatres, it managed to pull in a healthy profit from its franchise name with its opening weekend covering the cost of the entire film production. Though it also happens to be the follow up that sort of spoiled the run. Fans and critics dismissed it for various reasons but in all it lacked its original feature buildup and tension. A bit too much bus setting screen time made for a rather drab experience that has The creeper flying around like a monkey from Wizard of oz. I think it primarily failed for these reasons and a lack of real story this round. Our back story with the father is a nice subplot but not enough to save the annoying teens in the country bus humdrum. 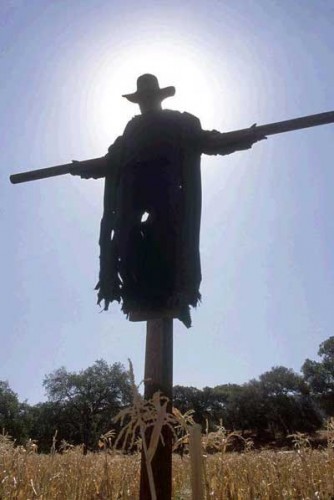 I still give this one a few kudos for some creepy shots and a nice performance by Jonathan Breck. I think we need some new angles next round to bring some life into this series again. Also in the original it wasn’t till the last scene that we saw wings. JC2 is spoiled by too much “Lord of the Rings” wing play and not enough chase-and-hide lurking. Tee cast for this release was bit of a let down as well. The school kids were annoying, the psychic chick seemed too “informed” for only having a dream and the whole film felt a bit convoluted.

If you happen to pick up the set of both films, I still say give the second film a go around. It brings in a few back story reveals and builds on the Creeper legend,. As mentioned before there are some initial scary moments with he Creeper stalking his prey, but soon the film becomes a bit of a drag on which is the primary reasons for its criticism.