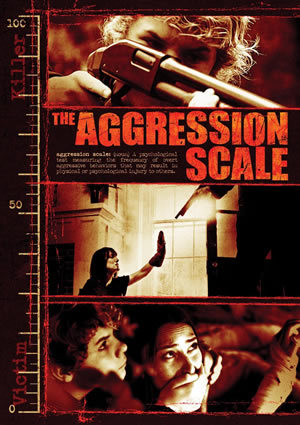 When mob boss Mr. Bellavance (Ray Wise) discovers that someone in his organization has stolen $500,000 in his personal stash, he sends his top hitmen on the trail of the usual suspects. Led by his right hand man, Lloyd (Dana Ashbrook), their investigations leave a bloody trail to a family moving into their new home in the rural countryside. Lloyd, Chissolm (Derek Mears), Freddie (Jacob Reynolds) and Wydofski (Joseph McKelheer) meet their match in the form of a very special and disturbed teenage boy whose psychological evaluation places him high on the aggression scale.

Director Steven C. Miller gets in the camera’s face early on with his thriller The Aggression Scale focusing on the killer hit man, Lloyd in the film’s first frames. The film is loud and bloody from the get go and the introduction is matched by the bold style of the title cards that follow. “Loud and messy, Lloyd, loud and messy” demands Ray Wise’s Bellavance when describing how Lloyd should handle anyone who touched his missing half a million. This also describes the film equally well, lots of loud jumps and a wild, messy script. After a solid a beginning, introducing the antagonists (Lloyd, Chissolm and Bellavance), the film shifts gears to introduce Owen, Lauren and their family sacrificing all the steam it had just built. The tone then becomes understated and creepy as the family’s odd behavior become more and more exposed. It’s an awkward balance, one with a purpose, but one that puts the two story-lines at odds with each other. The film has trouble recovering as Owen is never as interesting as Lloyd. Once the final confrontations are set in motion the film pulls its punches never delivering the same punch it did earlier in the film. Still, Miller shows a solid, confident and promising handling of the material. Dana Ashbrook and Derek Mears make for an interesting pair of thugs and Ray Wise chews up the scenery. The Aggression Scale is an odd combination of gangster bloodshed, violent Home Alone nonsense and final-girl survival horror that starts strong and ends up limp and boring.

(ag – gres – sion scale): noun: “A psychological test measuring the frequency of overt aggressive behaviors that may result in physical or psychological injury to others.”

The main protagonist is young Owen, played by Ryan Hartwig who must outwit Lloyd with his annoying step-sister, Lauren (Fabianne Therese), in tow. It is revealed that Owen has issues dealing with others and has a tendency for violent behavior when crossed. Hartwig is given no lines in the movie and pantomimes his way through the film. Instead of making the character interesting, this plot device only serves to distance the child further from the audience. This makes the character far fetched and less interesting than his murderous counterpart, Lloyd. Still, Hartwig does his best and makes a strong impression. If the remake for Phantasm makes it before the camera, Hartwig would make a terrific Mike facing off against the Tall Man. Fabianne Therese is given far more lines than her co-star, but is forced to scream and cry through most of the second act making her character far too annoying to root for. Much like the film, Therese starts off strong giving Lauren a fierce and rebellious nature that is totally squandered until the final frames of the film. It’s a shame.

Ray Wise’s and his Twin Peaks co-star, Dana Ashbrook, are reunited as mob boss and ruthless hit man. Along side them is Derek Mears who quickly displays why he should be getting far more roles than seen so far. These three are the best reasons for seeing this film. Ray Wise is fun despite looking as if he’s ready to run as far from this film as he can at any given moment. In a strange way, this fits the character as the mob boss is set to jump bail. Dana Ashbrook displays the familiar agitation he had in Twin Peak except now he’s given a mature, controlled presence that gives the film its edge. In the film’s opening shots, his Lloyd is dangerous and unpredictable. Derek Mears makes for a striking strong man backing up his co-stars, but a strong man with a personality. He brings a surprising human quality to his murderous Chissolm killer. He brings the film is best shot at authenticity when reacting to both the mayhem they cause and the pandemonium Owen throws at them at each turn.

Where the film’s script is undercooked and the final act is far too predictable to maintain any momentum the open act provides, the soundtrack is strong, amplifying the mood, and the tone of the film is full of dread and ominous despair. The film manages to have a number of creepy and violent moments early on. It’s interesting Miller and writer, Ben Powell, were able to resist having the entirely silent Owen break his silence to deliver a catch phrase. The silence of their lead character is a bold choice and they stick to their guns admirably throughout. Still, the character needs a little something extra to draw the audience in and they never find that elusive special something to make Owen a strong enough character. The film also makes a predictable turn where the escaping Owen and Lauren end up in the exact location as the pursuing murderers Lloyd and Freddie. It’s unavoidable and contrived, which also describes much of the third act of The Aggression Scale.

Steven C. Miller delivers a solid example of his style and promise but the film itself is loses steam and falls on its face after a strong and impressive first act. The cast of murderous mad men is strong with Dana Ashbrook and Derek Mears having fun dishing out bloodshed. Ray Wise makes an extended cameo as mob boss Bellavance giving a fun but tempered performance. Ryan Hartwig and Fabianne Therese are not given enough to make their final-boy and final-girl characters stand out or stand up against their far more charismatic co-stars. The Aggression Scale starts off with a bang and ends with a thud. Still the film is a promising example of Steven C. Miller is capable of; and, if he can capture the tone of the opening scenes for his remake of Silent Night, Deadly Night, that film could be a surprisingly gory good time. In the end, the promise isn’t enough for The Aggression Scale and the film is little more than a predictable survival horror retread.