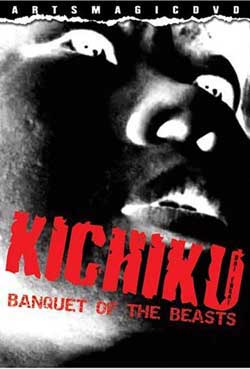 A leftist political group in 1970’s Japan is left without a leadership after their leader Aikawa is imprisioned. Aikawa’s girlfriend Masami is left in charge of the group, whose activities include drinking, drug use, sex, and of course the murder of traitors to the group.

Before I even begin to go into this review I want you do to me a favor, I want you to look at lists online of the supposed “goriest films ever made”. When you are done with that I will be right here waiting.

Okay that didn’t take too long now did it? Did you notice on most of these lists, not all mind you but most, there is a little Asian film titled Kichiku Dai Enkai? Kichiku as I am going to refer to it for the rest of this review was originally a final thesis project for the then 24 year old director. Yes, a movie that is rejoiced for its violent content was a final project for school; it makes me wonder though because if I were to turn in a film like Kichiku for a school project I am quite sure that I would be locked away. The film suffers somewhat due to this, it is apparent for the first half of the film that it is a student film. There are cuts that are harshly taken, and there are a few scenes where there is little to no dialogue at all, in fact during an initial viewing you might even start cursing all of those lists that had this film on it in the first place. Patience however is a virtue, and if one can suffer through the first part of the film they will soon be rewarded (can you really call the feeling you get from this film a reward?) with one of the most disturbing, vile, and violent films ever to be made.

The story behind Kichiku is easy to grasp. In the very beginning of the movie we witness a man named Aikawa, who is himself imprisoned, informing a recently released inmate named Fujihara about the group. He informs Fujihara that his girlfriend Masami is in charge of the group, and sends his “friend” out to make sure that things are running smoothly.

After this initial scene we are treated to a sex scene involving Masami. I should say here that the sex scenes in Kichiku are hardly a turn on, one feels like a peeping tom and almost a voyeur watching. Masami of course is having sex with another member of the group, the hot head Yamane. Masami it seems is using her sexuality to gain pull in the group, she is the only female in this political party.

After this we are introduced to two new characters, these two are very young students named Sugihara and Kumatini. Kumatini already belongs to the group, but he is bringing his flat mate and momma’s boy Sugihara into the group. Of course during all of this Fujihara makes his appearance in the group.

There is a botched bank raid held by the group in which a police officer (or officers) is killed. Yamane is enraged by this; he sees the insanity that Masami brings to the group. Masami being the intelligent woman she is though manipulates the group into kicking the young upstart out. She isn’t without a lover for too long however.

The film itself describes the next scene as an “enkai” party; there are three of these said parties throughout the entire film. The first one however just mostly appears to be the members of the group sitting around a room drinking and taking drugs. Masami calls Kumatini into a separate room and begins to seduce him. I actually enjoyed what this scene did for the film; it shows that the group is slowly falling apart into chaos. All of the members of the group sit in one room and listen as Masami and Kumatini have sex, no one speaks.

A few scenes later we learn that Aikawa has committed suicide in prison. Kumatini and Sugihara are drinking in silence to mourn the passing of the group’s leader. Yamane suddenly comes over and begins to talk with them, he has found a new group and he wants to talk both of the young boys into joining with him. Aikawa is dead after all, and Masami is losing control of the faction, it seems like a good idea. There is of course a brief struggle between the three which goes out into the hallway where Masami and the rest of the group are waiting. Masami suggest that the group take a trip out into the woods for yet another “enkai” party, and if you thought the last one was strange wait until you see what happens during this one.

Kichiku is almost like a roller coaster ride, the whole beginning leading up to the suggestion of the “enkai” party in the woods is like going up a large hill. When the group of course arrives in the woods the film suddenly throws its viewer into a whirlwind of violence. Upon arrival in the woods Yamane is tied to the trunk of a tree, the members of the group each take a turn beating on the traitor. In an act of insanity Masami suggest that they also tie Kumatini to the tree, after all he is friends with Yamane and therefore cannot be trusted. The group blindly follows the order, not realizing that earlier it was Kumatini who struck Yamane and caused the struggle which lead them all to meet up in the hallway.

The film starts to resemble some of the exploitation films of the 1970’s at this point, most notably Wes Craven’s The Last House On The Left, it isn’t that the situations are similar, its that gritty nasty and cruel way of filming. Like the sex scenes in the film, the scenes of violence are hard to endure as it is filmed in an almost voyeuristic fashion.

During the last half hour or so of the film, when it has taken this darker turn, we are treated to a number of graphic depictions of violence that are not limited to: A shotgun blast to a head (the FX on this shot are extremely well done for the budget), a castration, several scenes of members getting stabbed, a partial beheading and a samari like suicide.

By far the most disturbing of these violent acts however is the death of Masami. A shotgun is shoved inside Masami’s downstairs and then fired showering a Japanese flag with her blood. As I am writing this down it doesn’t seem that bad, I mean after all we have all watched the same movies now haven’t we? The direction of the film however leaves the viewer repulsed, again using that voyeuristic camera work you almost feel as if you are there in person watching these horrible acts being committed. Certain scenes in the film will stay with you long after viewing, much to the dismay of several of my coworkers when I couldn’t stop talking about it.

Is Kichiku Dai Enkai a good movie? Like I said when I started the review, the movie is a student film and yes for a student film it is very good. There isn’t much of an explanation on what the group does or anything, so most viewers are left confused, especially during the final “enkai” party in which everything just seems to get further and further out of control. I will also warn those who are reading this that the beginning of this film is SLOW, almost painfully slow in my honest opinion. Those who wish to watch the film only for the gory parts I have to recommend simply skipping forward to those particular scenes, as I said earlier there really isn’t any character development so you really aren’t missing anything.

Kichiku however does come with a high recommendation from me, for those who can stomach it.