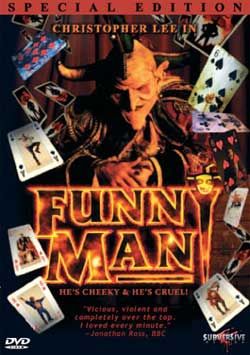 When Max Taylor wins the ancestral home of Callum Chance in a game of Poker, little does he realise that the game is far from over… One by one, Max’s family are murdered by the Funny Man, a demonic jester with a varied and imaginative repertoire of homicidal techniques and an irreverent sense of humour. Meanwhile, Max’s brother is on his way to the mansion with a bunch on hitchhikers who will be lucky to survive the night.

“When the wheel of fortune spins, an ancient game of chance begins, but who could know or guess the rules, adrift upon the ship of fools.”

If you haven’t had a chance to catch “Funnyman”, I strongly urge you to do so. I remember seeing this movie peeking up from the cut out bins, thinking wow that’s a creepy little dwarf, I wonder though if the film is any good. “Funnyman”, is an early film toted as a horror comedy. Coming from 1994, it has it’s own unique qualities that you might even make connections between Wish Master, Freddy Krueger and well….. “Warlock”. 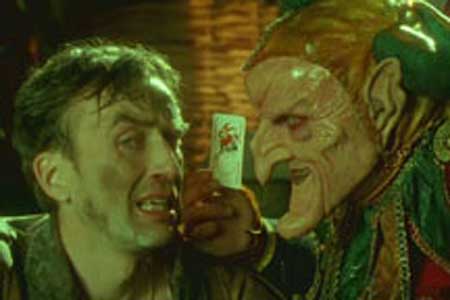 Max Taylor (Benny Young) has no idea when he wins an ancestral home from Callum Chance (Christopher Lee) in  a game of poker what he has acquired. Upon arriving Max innocently spins what they call a “wheel of chance”. This is a wheel that basically has 2 wins and 2 loses on it. When it lands on lose, it also wakes a tiny demon jester looking fellow that we are calling “Funnyman”. This strange whimsical creature is really a demon who likes to play a bit before murdering. What makes this film a hit in my book is that his methods are supernatural, humorous and highly original as he summons up nightmare scenarios and dreamscapes rich in theatrics. Funnyman, our nightmarish Judy and Punch fellow also makes sure to address the audience occasionally to add a touch of creepiness to the whole affair. He’s lewd, obscene, violent and unrelenting. He seems to live in a dimension all his own that comes and goes between scenes to do his worst. 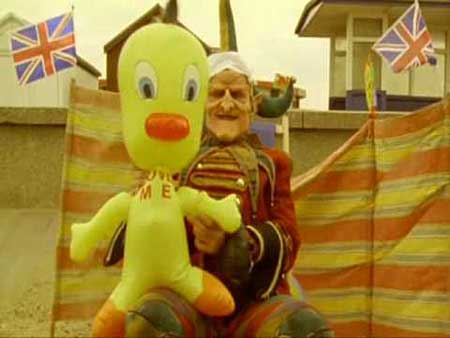 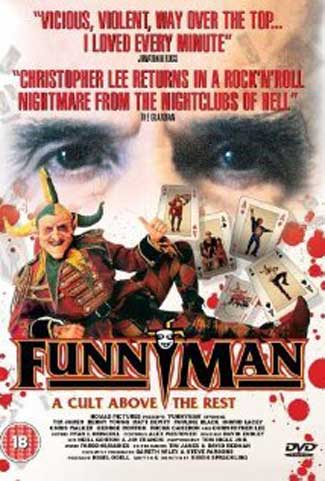 Max’s brother, Johnny Taylor (Matthew Devitt), is also due to arrive at the home. On the way he picks up a group of hitchhikers who eventually are on target to just become more victims added to the head count. One of them is pretty hip into voodoo and makes the connection per her tarot cards. The cover states” He’s cheeky and he’s cruel”. You might want to remember that cause this little deviant even in his tiny showmanship state will still aim to destroy you in the most horrific way. These horrifics are lightened of course with the “Funnyman” flair.

In one scene he tricks a woman into a virtual looped scene until he decides he’s had enough and bashes her brains in. In another, a unexpecting fellow walks half way thru a wall only to have his exposed half blown to bits. This in combination with several other scenes is the surreal world of the Funnyman. Apparently he is able to alter worlds a bit in the same fashion as Freddy would in his dream state. Joking the whole way, Funnyman always adds terror to his puns and performances. 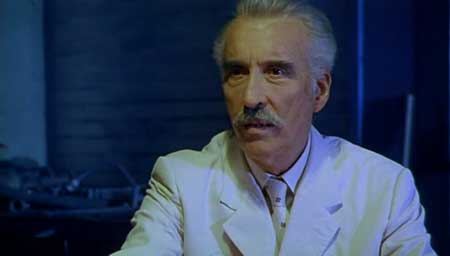 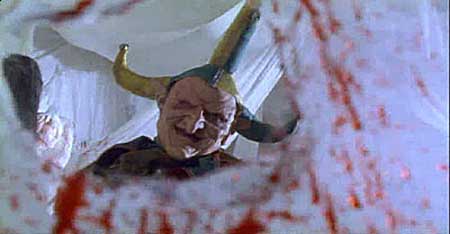 I acquired this one years back, and still to this day consider it one of my favs in collection. It’s violent and odd enough to really surprise a few folks who might be expecting something drab and less involved. You might remember another film that arrived on the scene in 1994 called “Brain scan” which strangely also had a much taller but like character named “Trickster”. Not so much a connection but I do like to point these similarities out.

Upon review I wanted to include any tidbits I could drum up from the IMDB archive.

So with that said, they posted this little credit plug. “During the credits a song called “Funny man” is played, The Funny Man talks over the top of this song telling the audience to sing amongst other things. After the credits finish we see Funny Man standing in a garden. He looks at the camera and says “No rest for the wicked!” he then walks off camera.”