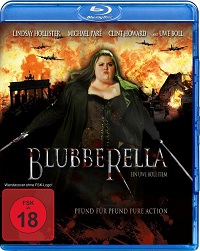 An action comedy centered on an overweight woman whose footsteps cause explosions and whose dual swords are used against anyone who makes fun of her. (imdb.com)

Uwe Boll is notorious for making spectacularly bad movies, and his newest venture, Blubberella, is a comedic satire that lets the viewer down more than entertain. Shot simultaneously to Boll’s newest addition to the Bloodrayne series, he could borrow all the costumes and set pieces for the a Third Reich Germany setting to set the stage of a heroic plus-size superhero that battles with swords and food to save everyone from the evil Nazi forces.

Blubberella(Lindsay Hollister) enters the film wearing a costume of a leather corset, pants, two swords to fight with, and most of the time a chicken drumstick to chow down on while fighting her enemies. The film takes place in Germany during the 1940’s amongst World War II, and Blubberella is a fearless warrior being half vampire/half human. She ends up meeting up with a small gang of renegades, lead by the flamboyantly gay Vadge(William Belli) and the resistance leader, Nathaniel(Brendan Fletcher.) Their plot to release Jewish captives on a train is foiled by themselves, and they leave the scene to an unruly Nazi Commandant (Michael Pare), who eventually becomes a vampire himself.

Blubberella, along with her team of resistance army, eventually works as one to fight the German Nazi squadron, while building a romance between Blubberella and Nathaniel. The movie has parody moments, including a scene replaying the part in Lee Daniels’s Precious where Precious is being tormented by her “momma,” but instead it is Blubberella being tormented by her mother played by a heavily costumed William Belli. Another scene shows Blubberella having play dates with Adolf Hitler, a cameo by director Uwe Boll, and having a merry time eating and playing board game with the monstrous tyrant. Her tryst to talk Hitler out of his dictatorship is unsuccessful, and Blubberella is forced to fight the Nazi troops with her small army of resistance fighters.

The costuming and sets made the movie, as its repetitive cheesy one-liners and use of electronics like laptops, dating websites, and cell phones strayed the viewer away from the believability of the film of being set in Third Reich Germany. Even though Blubberella is an empowering lead actress as she is not athletic and thin like most lead actresses play in her role, she ends of getting the guy in the end, along with whatever food is laid out on the table. William Belli, who played Vadge in the film, was a standout character, as he delivered clever one-liners and even played Blubberella’s mom in costume during the Precious parody. The film is filled with cameos being shared by the production of Bloodrayne, and Clint Howard even shows up as a maniacal doctor trying to understand the vampire spell affecting the Nazi troops.
Uwe Boll’s Blubberella is a new addition to the comedic parody movies, aimed to make fun of dramatic vampire horror stories. The repetitive aim for comedic value is an annoyance during viewing, as a lot of the jokes are overdone and out there to try for hilarity.

There is an occasional amount of bloodshed, but the film is very tame for a vampire flick. Of course, Blubberella mostly fights with whatever types of food she is carrying on her, and rarely uses the dueling swords she is known for in the synopsis. Blubberella shouldn’t be taken seriously, and regarded as a comedic play on the inner battles within Germany in WW II.