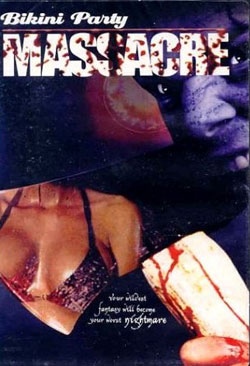 Your Wildest Fantasy Will Become Your Worst Nightmare

I’ve actually watched Joseph Clark’s “Massacre”, a.k.a. “Bikini Party Massacre”, quite intently (even the end credits) several times over the years (owing to becoming online friends with a couple of the cast members) but I’m absolutely sure that there wasn’t a bikini party anywhere in it. I did however see a blue tophalf of a bikini being worn by one of the sexier characters for most of the film but does that justify it? It could just as easily have been a blue bra. Forty minutes in there are two girls sunbathing in bikinis but it still isn’t much of a party. Oh well, as usual in this kind of independent film, all the girls are very pretty.

I couldn’t make head or tail of the story to begin with. It started off with some guy urinating on a bad CGI butterfly (which seemed to fade out in a weird way), then the scene changed to his girlfriend peeing…. ok, there’s going to be a lot of peeing in this film which I’m going to mention. Do you think the director was trying to tell us something? Whatever the case, this really is taking the piss if it claims to be a good horror movie. 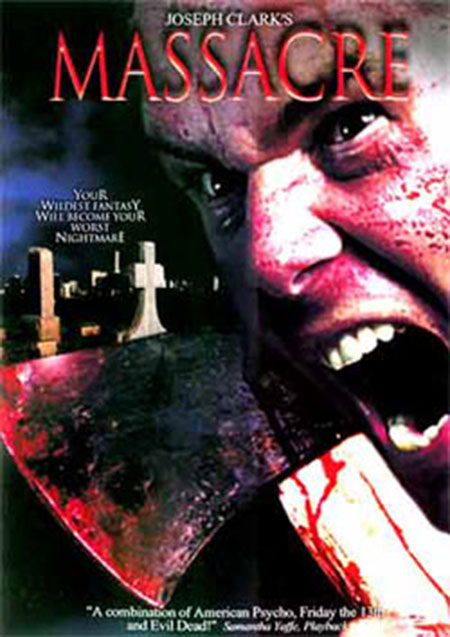 Is there a plot? Yes and no. It’s basically just a low-budget slasher but with a twist. It’s hard to describe it in any way which wouldn’t spoil it as it’s also very much a poor man’s version of “Identity” (which came out a year after in fact). I’m sure most of it was just made up as they went along as you can almost hear Joseph Clark’s direction to ad lib every scene. So, for once, I’m going to go through the whole thing from arche to telos because I doubt that you’d ever want to watch this yourself. I would encourage you to see it though as it really is a textbook example of how to make an independent movie and do it very badly.

Back to the action. Well, the couple walk along a path in the woods (while arguing about the guy’s sister starring in p*rno movies) until they find a dead body which was obviously murdered due to the knife sticking out of his belly and all the fake blood. It’s not very realistic and is certainly not scary. 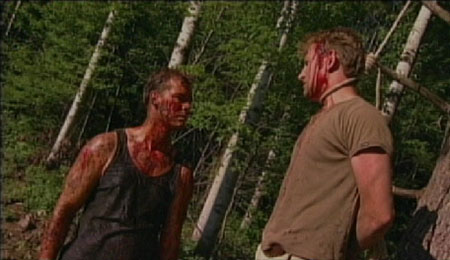 We are then taken somewhat annoyingly, after the opening credits, to what happened three days earlier…

The story continues with a group of friends in a car who are on a camping trip into the woods. Oooh, how unoriginal. There is some amusing bickering and arguing between two of the girls at one point but I started to get a bit lost due to the appalling acting (I couldn’t tell if they were serious or not but background information tells me that they were!) and almost gave up entirely when some weird “nightmare” scenes with bad sound started occurring. A nude woman (played by gorgeous Naomi Vondell) with blood all over her wandering down some railway tracks made no sense at all. I think we all know where this film is going… and it isn’t going to get any better! 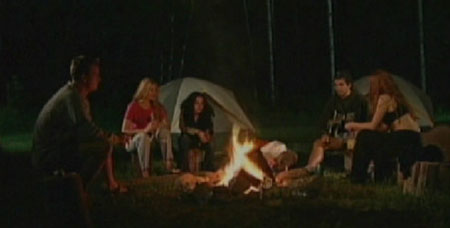 The filmmaking here deserves a special mention as not only are the crew visible in reflections several times but the camerawork is truly awful. It’s all shaky and there are lingering shots over things which have no relevance whatsoever. I think it was just padding to make the film longer. Not that it needed any padding because it couldn’t be much slower!!! I still have no idea what any of it was to do with the rest of the film.

Anyway, back to the story. The car runs out of petrol so the driver, Jeff (who is also the starring actor, director, producer and writer – Joseph D. Clark), goes off with a can to get some. On his travels some kind of pop video occurs (with onscreen credits!) and he ends up at the house of a fortune telling witch. She gives him petrol and, after having some vision of axes and blood, she tells him, “Don’t go there!”… Yes, I think I could give you all a similar warning about this film. Jeff ignores her of course.

Things then start to pick up when they arrive at their camp site. There’s a bit of beach fun and frolicking in the sea but the promise of some boobies here is just a tease. Perhaps this is the bikini party?

Time moves on very quickly (but not if you are watching this film). Soon it is dark and they have a campfire. First a couple of them try to tell creepy stories and the guy who holds a guitar yet never once attempts to play it does his best to make them jump. It’s so lame. I wish I could find a better word than “lame” but for some reason this film seems to have now rotted the part of my brain that can come up with a suitable English expression. Worse than crap is my next thought.

Then they decide to play “Twenty Questions” (but we only get two!) and everyone learns the “story”. One of the girls was raped by her father and now sees his ghost. She has sex with almost any man she sees just to make her father’s ghost angry. This is probably the most important part of the film so pay attention!

The next ten minutes are spent indulging in the revelations provided by the story. Every male fantasy comes true for Jeff while the “guitar dude” gets a go on daddy’s girl. I’m sorry if that appears to be confusing but I didn’t catch the names of the male characters other than the lead and I have no idea what the names of the girls are other than them being called Mandy, Randy and Sandy. I couldn’t tell you which was which because I didn’t really care about their names at this point. At last we get some decent nudity even if it is with more amusing classical music and comedic wriggling.

Finally, about an hour and fifteen minutes into the film (remember this is only 78 minutes long), the massacre starts. Some random forest-lurking guy steals a lump of wood and freaks them out but it’s a red herring. The “kids” all start getting unconvincingly killed with a mix of some of the worst practical and CGI effects ever created. Is it the freaky “creepy guy”? Is it Henry the mild-mannered janitor? Er, no… there’s a big twist coming…

I’m not going to spoil it for you. You’ll have to watch it to find out as you would not work this out in a million years (unless you watch the opening credits VERY carefully!). I actually enjoyed the ending more than all the rest of the film put together. It still wasn’t, in any way, shape or form, scary though but at least it was an ending to the whole torturous experience.