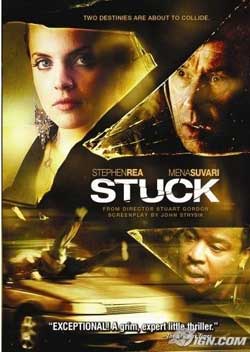 Driving home after a night of partying, Brandi (Mena Suvari) accidentally crashes into pedestrian Tom (Stephen Rea), who gets stuck in her car’s windshield. Brandi struggles with whether to help save this man’s life or simply let him die and thereby protect her career. In extreme pain and with little time left to live, Tom pleads for Brandi’s help and tries to find a way to escape from his glass prison in this horrific thriller.

“Stuck” may not be your traditional idea of a horror film. In fact, it may not be a horror film at all on the surface. At its core, is a dark morality tale, told with intensity by one of cinema’s most underrated auteurs, Stuart Gordon. As a director, with each film, he has grown, and with “Stuck”, he has proven once again that he is unstoppable. With a top notch cast featuring Stephen Rhea and Mena Suvari a script by John Strysik, Gordon lets loose and gives a story driven by character and executed with perfection by his two leads.

Mena Suvari is Brandi, a nursing assistant on the brink of a promotion that is being dangled in her face by Mrs. Peterson, her superior, played by the always engaging Carolyn Purdy-Gordon, Stuart’s wife. She is favored by the senior citizens of the hospital she works in and puts in the extra time to prove she is worthy of that promotion.

Stephen Rea is Thomas, a man down on his luck. He owes back rent on his apartment, which he can’t pay, and his landlord is tossing him out, not allowing anything to leave the apartment until payment is made. He is trying to get ready for a job interview but the landlord wants him out now. Thomas manages to grab a handfull of clothes and is chased out of his home, optimistic that the interview will pan out.
While things are looking up for Brandi, Thomas is having one bad day, each experience worse than the next.

Brandi heads out for a night at the club with her friend, and fellow nurse, Tanya (Rukiya Bernard) and her drug dealing boyfriend Rashid (Russell Hornsby). They spend the evening boozing it up and popping pills while Thomas is lost in the system at his interview, thrown out of the park by the police, and left walking to the other side of town to a homeless shelter. When an intoxicated Brandi crashes her car into Thomas, who is thrown into, and “Stuck” in her windshield, our morality tale plays out, and is an engaging story of how these people deal with the situation they have found themselves in.

In order for a movie like this to work, the lead actors need to be at the top of their game. And lets just say that Mena and Stephen deliver in spades. When we first meet Brandi, we like her, a sweet girl with a drive to succeed. Throughout the course of the film, Brandi changes and she becomes unpredictable. I have never been a big Mena Suvari fan but this film will forever make me think twice. Being a nursing assistant, we see how she can care for others, but with her career jepordized by her mistake, she chooses to leave Thomas to die, stuck in the windshield, placing the blame on him, rather than herself. Mena puts her all in the role, I have a feeling that this character meant something to her since she also served as one of the films executive producers.

After forty plus years in the business, Stephen Rea still finds himself underrated. Over the last few years, with films like “V for Vendetta” and “The Reaping” under his belt, these smaller, personal films allow him to shine as an actor. Thomas is a character you immediately want to root for the first moment you see him. He is hurt, desperate, depressed, and determined. During the first part of the film, he wants to succeed in life, find himself a job, and keep off the streets. The second half of the film, he just wants someone to help him, someone to show him an act of kindness while just barely clinging to life. He is a character, especially in this day and age, with our economy in a such a withered state, that could very well be ourselves. Thomas represents us, the every-man. We relate to him on that level and we feel strongly for him and want him to prevail.

Gordon keeps the film incredibly tight. With a running time of just over 80min, there is no filler. Every scene moves the story forward or reveals bits and pieces of character and shows us just who these people are. The supporting players all do their jobs well, the only character that gets enough screen time to learn anything about is Rashid, Brandi’s boyfriend. Russell Hornsby plays him with a splash of style and a pinch of sleaze. When Brandi comes to him for help when Thomas “just won’t die”, these scenes are sprinkled with the signature dark humor that Gordon has always laced his films with. And it works in the films favor. “Stuck” is the type of movie that plays best when you don’t know what to expect or know much about.

I sat on this DVD for months before I watched it and had forgotten alot about what I had known of the story and I feel it added to how I feel about this film. So I won’t divulge much about the story and where it heads. This is a character study, Brandi has EVERY opportunity in the film to make the right decision but never seems to do the right thing. Thomas wants to do the right thing and hopes good things will come to him. The violence in the film is never over the top and feels realistic, and there is plenty of the red stuff to satisfy horror fans. Not only the violence has that in-your-face reality, his approach, the documentary feel he gives the movie almost serves it up as a slice of life, a portrait of the day and age we live in.

Stuart Gordon is, arguably, a living legend. Any self-respecting horror fan holds “Re-Animator” in their highest regards. I feel that he has, over the years continued to deliver top-notch horror/thrillers and starting with “King of the Ants”, “Edmond”, and now “Stuck”, Gordon has shifted his focus to strong characters. Where the stories are flawed, “Stuck” is no exception, the characters make up for its shortcomings. Brandi becomes so unpredictable that at points I did find myself on the edge of my seat, which is rare for me. And by the end of the film, I wanted to go out and do a good deed for someone, to show someone else the kindness I wish others would show me.

My only complaint is that the ending felt too cut and dry, or even a bit forced. But that doesn’t change the fact the this film works regardless and though it may not technically be a horror film, it is one that really shouldn’t be missed.