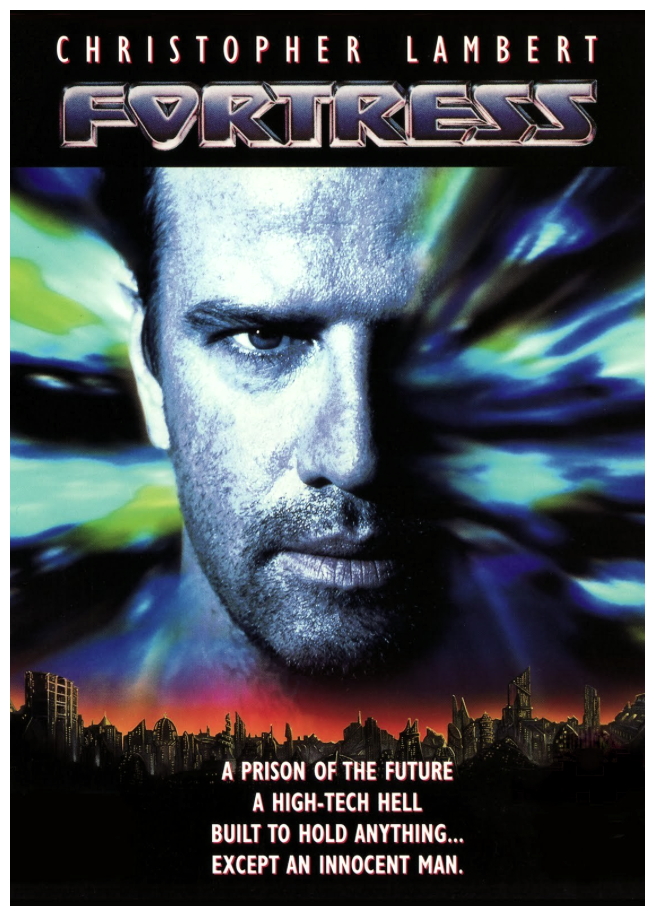 SYNOPSIS:
“In a futuristic USA it is forbidden to give birth to more than one child for each woman. As usual, you can escape to Mexico to avoid the authorities in USA, which is exactly what John and Karen Brennick were trying to do when Karen is pregnant with her second child (their first child was born dead). When they think they have made it they are discovered and put to prison (for thirty-one years), a modern prison called the ‘Fortress’ where the prisoners are controlled by lasers, neutron-cannons, cameras, mind-scanners and electronic pain-causing devices in their stomachs. With those odds, John still plans to escape with his wife.” (courtesy IMDB)

REVIEW:
Filmmaker Stuart Gordon is known for his horror movies, although he has occasionally drifted toward horror’s sister genres, film noir and science fiction. Gordon is a longtime fan of H.P. Lovecraft and has adapted a number of Lovecraft stories for the silver screen, most notably Re-Animator (1985), From Beyond (1986), Castle Freak (1995) and Dagon (2001), as well as the Masters Of Horror television episode Dreams In The Witch House (2005). Together with Brian Yuzna and Ed Naha, Gordon co-created Honey I Shrunk The Kids (1989) which unexpectedly became Disney’s highest-grossing live-action film ever, receiving positive reviews praising its story, innovation and special effects. As writer, producer or director, Gordon has continued to develop an impressive body of work: Body Snatchers (1993), The Dentist (1998), The Wonderful Ice Cream Suit (1998), King Of The Ants (2003), Edmond (2007), and his science fiction films – Robot Jox (1990), Fortress (1992) and Space Truckers (1996) – have become cult favourites. 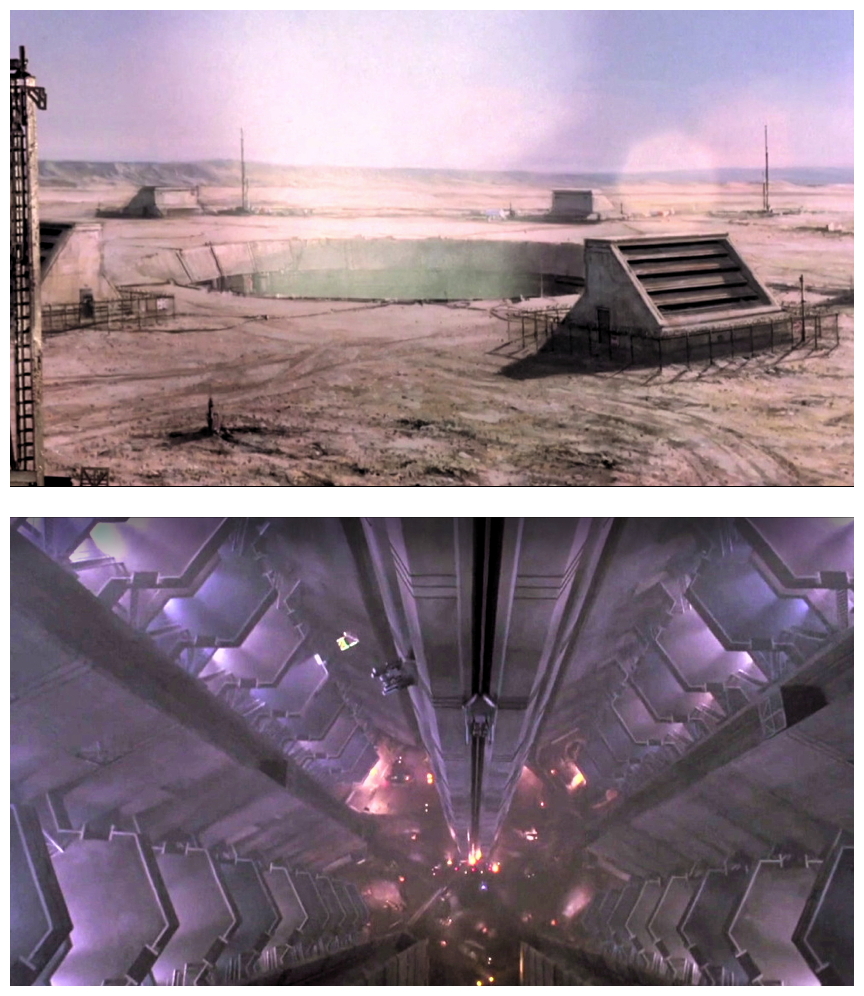 In the far-flung future year of 2017, the high-tech prison known as Fortress is the most sophisticated maximum security facility ever built, buried thirty storeys underground, privately owned and managed by an international conglomerate. Inmates are forced to swallow a device called an intestinator, which administers pain for infractions and, in the case of escape attempts, death. Prisoners are put to work excavating and digging deeper because the Fortress is constantly expanding, and the entire facility is run by Zed-10, a near-omnipotent super-computer. Former army officer John Brennick (Christopher Lambert) is imprisoned for trying to cross the border with his wife Karen (Loryn Locklin) who is pregnant with their second (and therefore illegal) child. Gordon: “In our society we can’t seem to build prisons fast enough. I found the idea of doing something about prisons very timely. Doing research we discovered that attitudes about prisons changed during the Reagan and Bush administrations. Prisons no longer rehabilitate, they’re there to punish. Because of the war on drugs, prisons are jam-packed. They keep building more but, the day they open, they’re already overcrowded. The new high-tech prisons have fewer guards, they use video and electronic surveillance, and keep prisoners in their cells twenty-two hours every day, it’s really horrific. In fact, a lot of them have been criticised for sensory deprivation.” 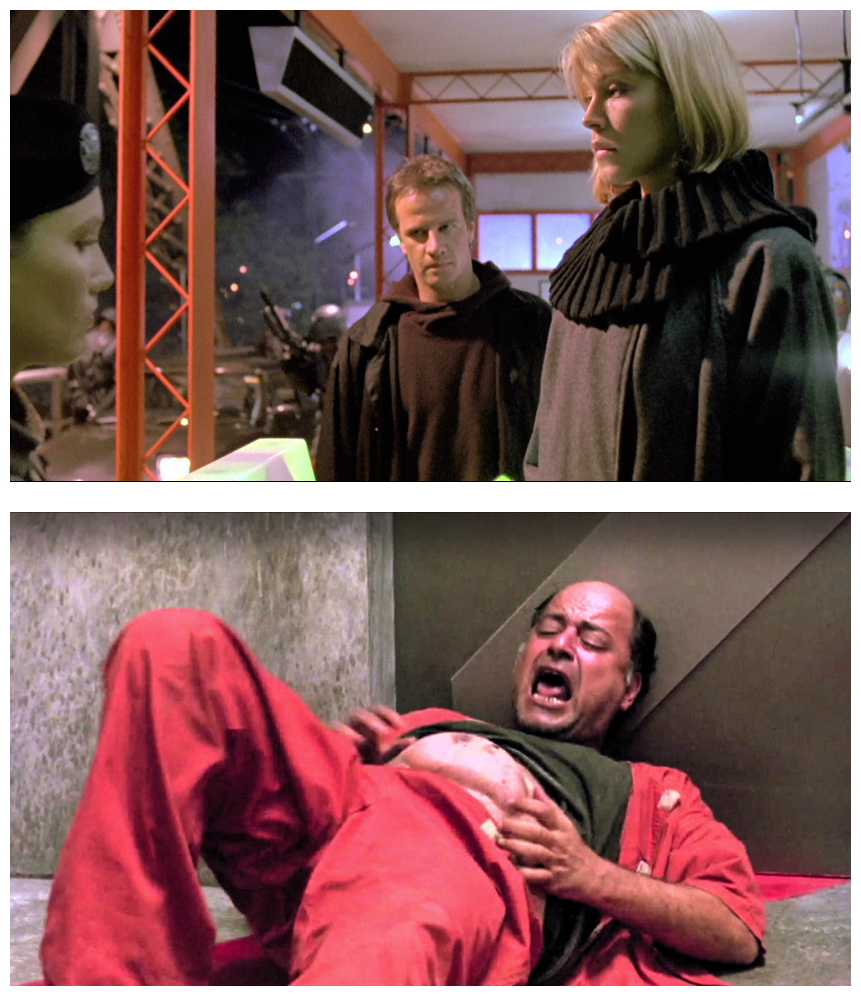 Research included a tour of the then-new Pelican Bay correctional facility in North California. “This is where they send the worst two percent of all the prisoners in the state, basically to break them. The prison is inside a beautiful forest on the coast in the middle of no-where. Though it’s clean and futuristic-looking, it was one of the most hellish places I’ve ever been in. We used that as the model of our ideas for the Fortress.” The film was shot at the brand new Village Roadshow Studios and their new theme park Movie World which had just opened in October 1991 on Australia’s Gold Coast: “The sound-stages were the biggest I’ve ever seen anywhere in the world. We built what we call a ‘pod’ which is actually a cell block. Our set was four storeys tall. The idea that there was eleven of these stacked on top of each other, which we created with miniatures and forced perspective. Since ninety percent of the movie takes place in this prison, we really wanted the audience to get a sense of how it operated.” 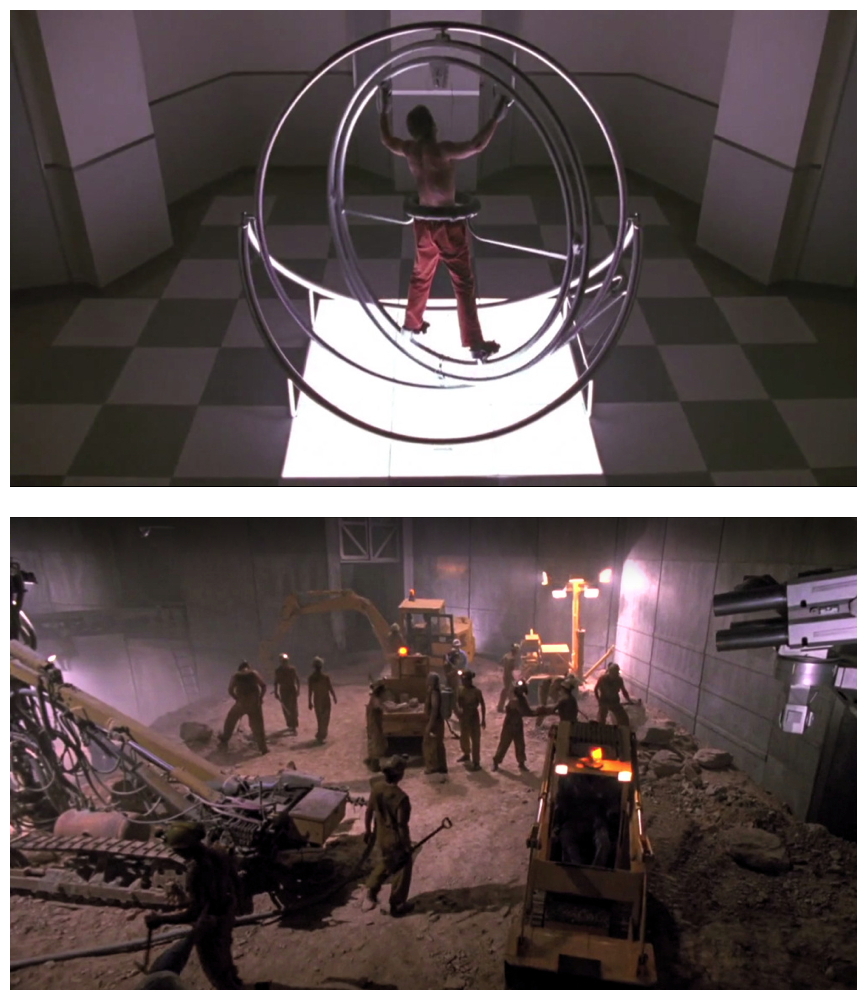 “We have weapons called neutron cannons which only destroy organic material and blow gigantic holes through people. When enhanced people are hit they spurt a blue-coloured fluid for blood. We also have strike clones, enhanced people who are armoured and wired into the main computer which runs the whole system, sort of like cyborgs, ultimate soldiers with weapons welded to their bodies. The pods are cut off from one another, connected by retractable bridges. The fight breaks out on one of these bridges as it is retracted. Finally, a neutron cannon is brought in and vaporises one of the combatants. That sequence took two weeks to shoot.” The character of Brennick was originally to be played by Arnold Schwarzenegger, who was a big fan of Re-Animator: “It was Arnold Schwarzenegger that got me the job and it was because of Re-Animator. We used Arnold’s body-double in Re-Animator. The first reanimated corpse is a guy named Peter Kent, Arnold’s double. He’s got those big muscles. He got Arnold to see Re-Animator and Arnold liked it so much that he had a screening of it in his home, inviting all of these people, including producer John Davis.” 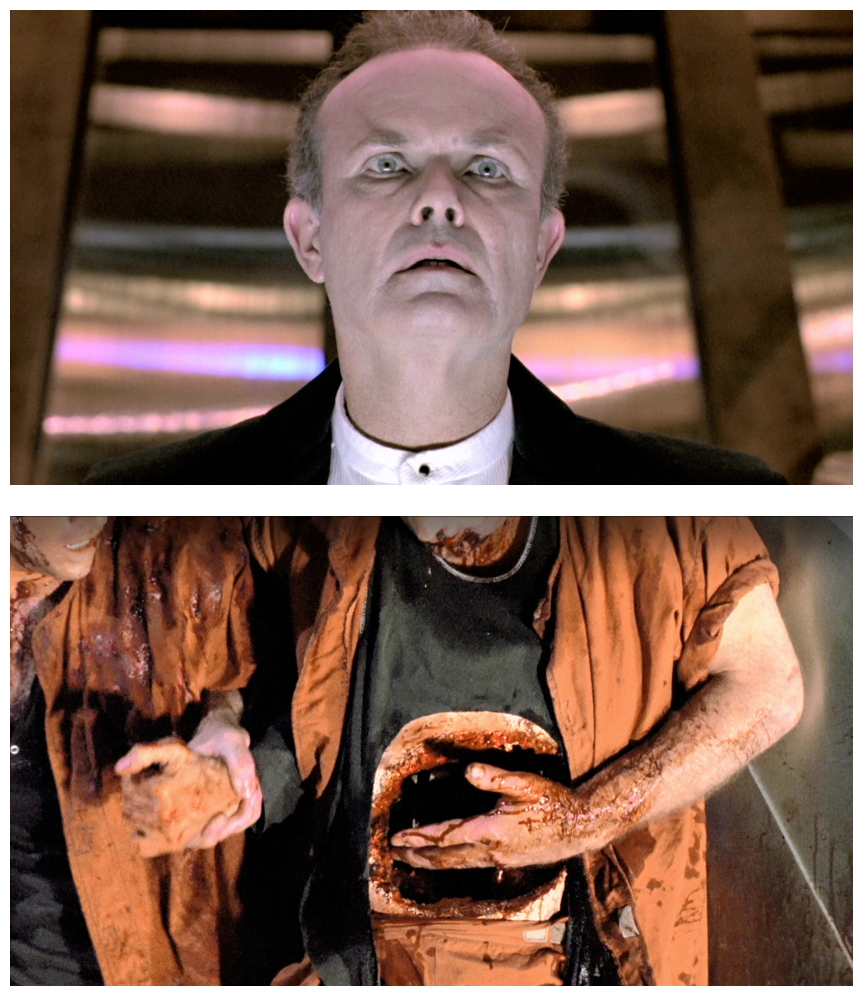 Davis had previous hits with Predator (1987) and Predator II (1990), and would go on to produce more than a hundred of Hollywood’s most mediocre movies, from Waterworld (1995) to The Man From UNCLE (2015). “John had the rights to Fortress and Arnold was going to do it. For some reason, I’m not sure why, Arnold finally decided that he wasn’t going to do the movie and dropped out. They had a big budget, probably like sixty million, seventy million dollars, which was a huge budget in those days. Now it sounds small. Anyway, he dropped out and the budget went down, they cut the budget to about fifteen million dollars.” According to both Wikipedia and the Internet Movie Database, however, the total budget for Fortress was a mere US$8 million. With Arnie out of the picture, another action hero was needed, and Christopher Lambert got the job. 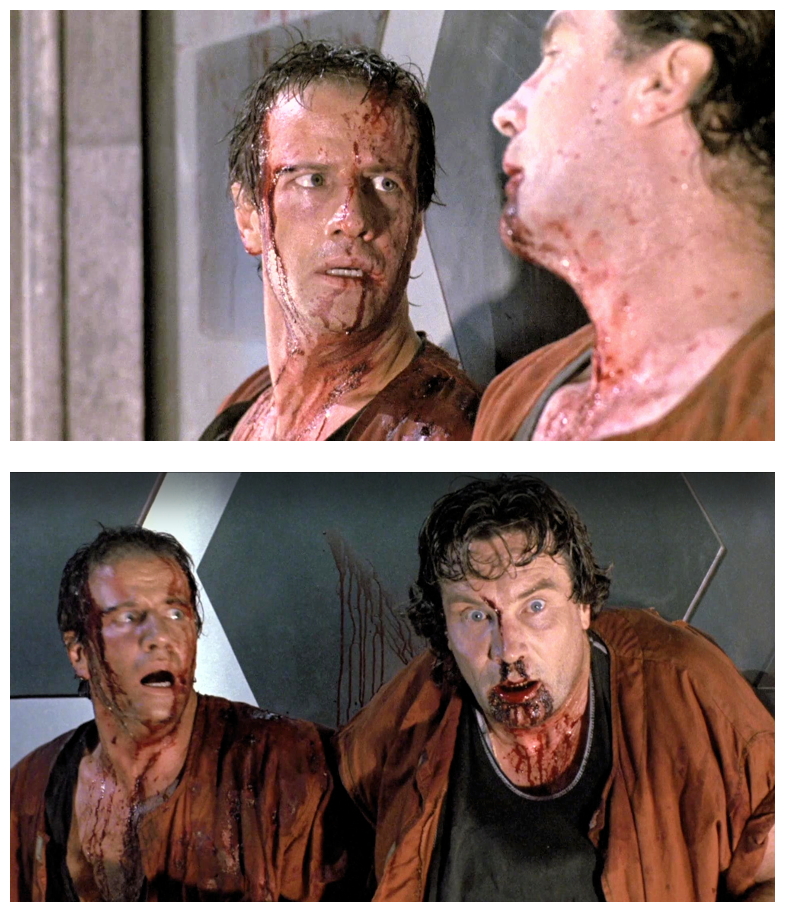 “Lambert is in excellent shape and likes to do his own stunt work. The only fights we had were when I told him I thought something was too dangerous. I didn’t want to risk losing my star half-way through the shoot. The truck comes literally right on top of him. He starts firing a flamethrower and, at the last second, it swerves off and bursts into flames. After a great deal of arguing I convinced him to let the stunt guy do it first. The stuntman literally singed off his eyebrows because the flames were so great. Then Lambert asked to do the next take, and he did. Thank god he was not hurt. He is very committed. The truck blows up, flips into the air and lands on a barn, and then the barn blows up. The Australian’s attitude seems to be why do it in miniature when you can do it for real.” Fortress was edited by Tim Wellburn, who cut The Chain Reaction (1980) and Mad Max II The Road Warrior (1981), and cinematographer David Eggby got his start filming the first Mad Max (1979) and would go on to shoot The Tommyknockers (1993), Dragonheart (1996), Pitch Black (2000) and Riddick (2013). 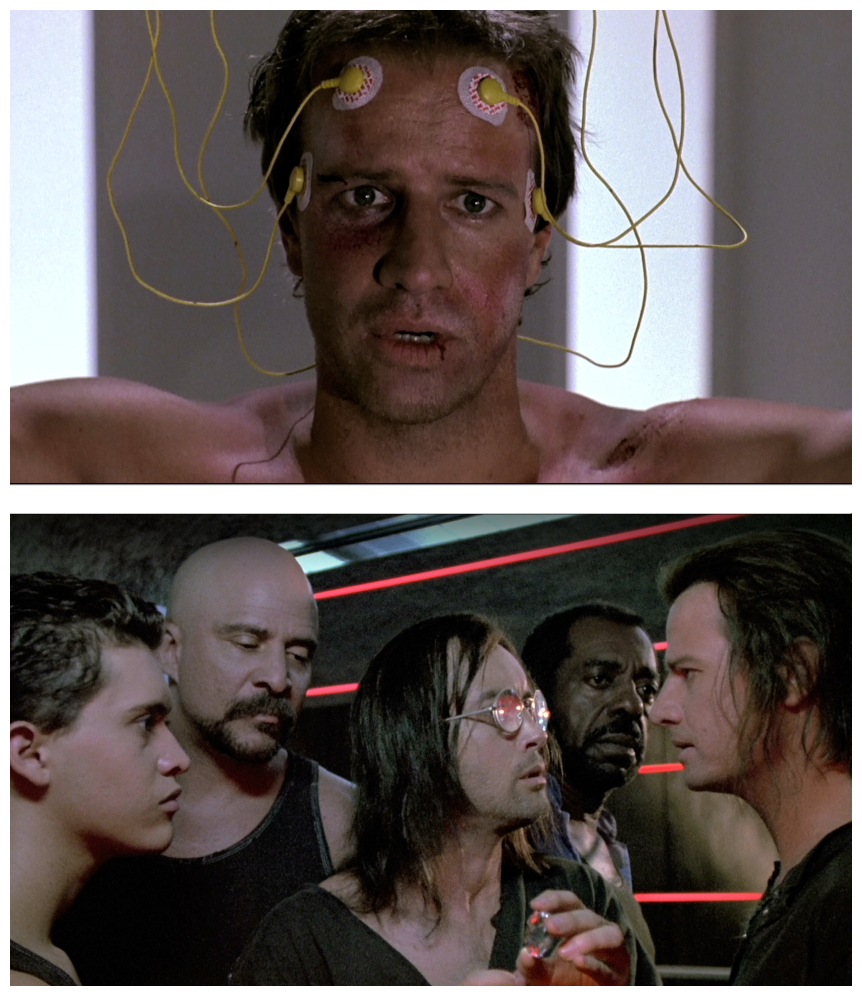 Eggby came up with the economical solution of how to shoot the prison cells with laser beams instead of bars. “He suggested the idea of using the Scotch-lite material they used in Star Wars (1977) for the light-sabres. We made the bars out of this material, which meant people could walk in front of them without rotoscoping everything.” Tad Pride designed and built the strike clones that shoot both bullets and flames, and the ‘little sister’ surveillance robots that glide along tracks. Pride, an American model-maker who relocated to Australia after serving in Vietnam, was able to create props that were both believable and functional. Before appearing in Fortress, Loryn Locklin starred in the Wes Craven made-for-TV movie Night Visions (1990) as a psychic criminal profiler. She’s not given much to do as the leading lady, but the supporting cast includes some of my favourite character actors: Jeffrey Coombs; Lincoln Kilpatrick; Tom Towles; Vernon Wells (who happens to star in the 1986 Australian film of the same name) and Kurtwood Smith, who stands out as the maniacal manager of the Fortress. It features everything one could ever want from a nineties B-grade movie – lots of action, imagination and some good performances (Australian Rules footballer Warwick Capper is a mindless idiot, but I’m sure you already knew that). 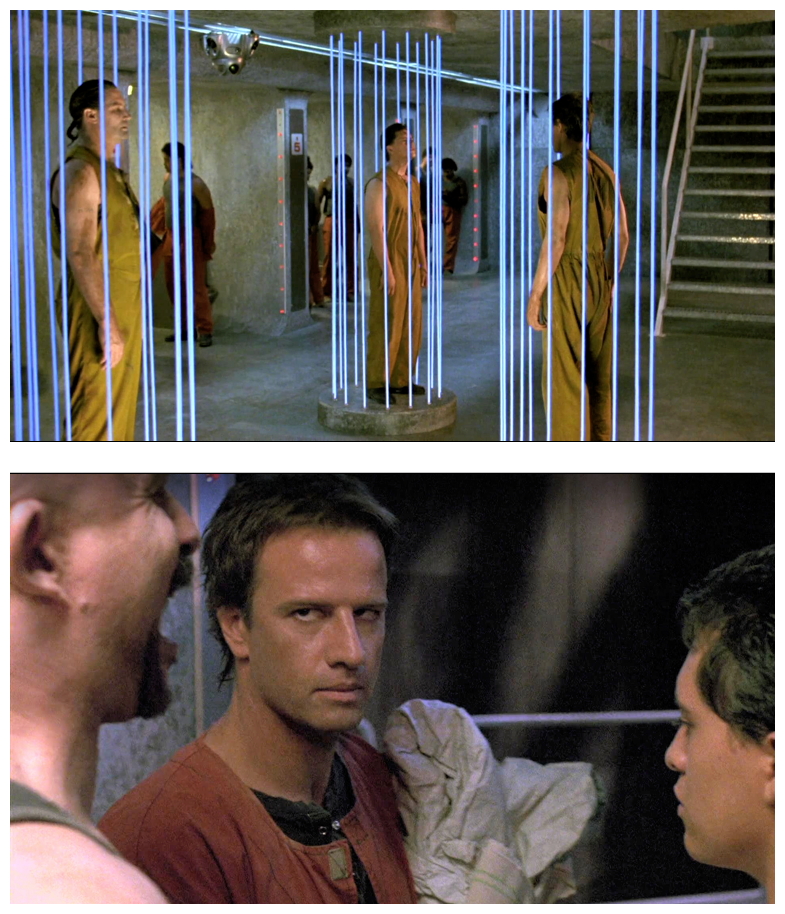 It all boils down to a suitably over-the-top climax and, while this might not be the best film ever made, it is a lot of fun and, if it happens to turn up on television late one night, I certainly recommend it. Critic Nathan Shumate hit the nail on its proverbial head: “It’s a good little film, kept very interesting by a multitude of plot twists. The beauty of this movie is that it’s not terribly ambitious, Gordon knew that it was not meant to be this generation’s defining science fiction film, and so instead had fun with it. The characters are colourful and engaging and the actors are B-movie all-stars, the story moves along at a fair clip and the prison itself is a novel setting, with plenty of inconsistencies in future technology but none that sit up and insist that you notice them.” Gordon saw Fortress as a change of pace from the Lovecraftian terrors that made his name. “It’s not a straight-out horror film, it was a chance to create a future world and make it believable. My only fear is that people in the prison system will take a look at this movie and say hey, that’s a good idea, let’s do it!” I’ll leave you with this rather depressing thought in mind, and ask you to please join me next week so I can poke you in the mind’s eye with another frightful excursion to the backside of Hollywood, filmed in glorious 2-D black & white Regularscope for…Horror News. Toodles! 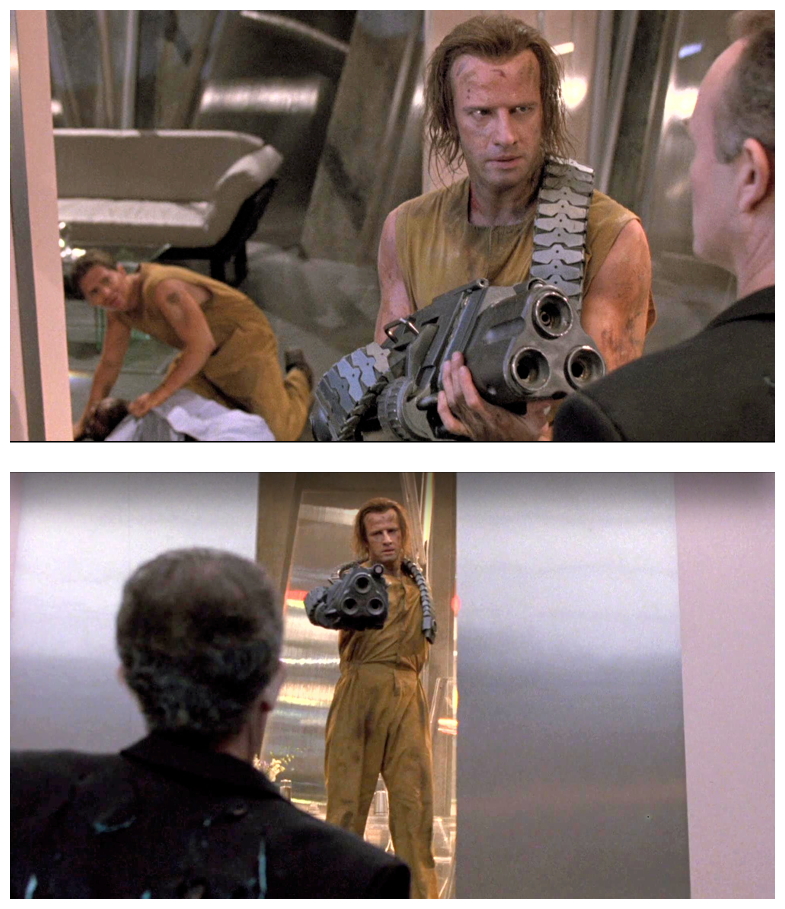