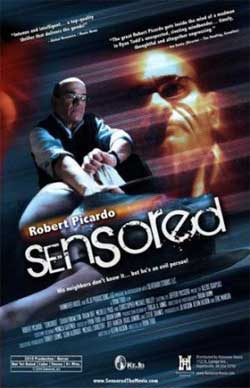 A children’s book illustrator inhabits a twilight world of shifting reality and illusion, where cruelty and rampant evil do battle with his better instincts, and sanity is a question of perception.

Boy, they say that all of the great artists are tortured souls but holy cow, were they ever as tortured as this? Sensored offers us a glimpse into one such soul and the results, while sometimes mixed, make for quite a fascinating watch. It sounds dumb but you’ll get a lot more out of the film if you really pay attention. In other words, this isn’t one of those films you watch to escape or just relax. If you know that going in, you’ll enjoy it that much more.

Robert Picardo stars as Wade Mixon, a children’s book author who, to put it politely, is not quite all there. The movie opens with him staring out of a window several stories up, looking down at the world below him. A lengthy voiceover introduces us to the man, but more than that also the pain and sorrow that was his childhood. He barely knew his Dad. He watched as one of his friends pushed his invalid sister Tara into the family swimming pool and drown as he just looked on. That incident, he points out, was really the catalyst for what was to follow. As he puts it, “The worst pain that you can inflict on someone is to make them watch the suffering of loved ones.” 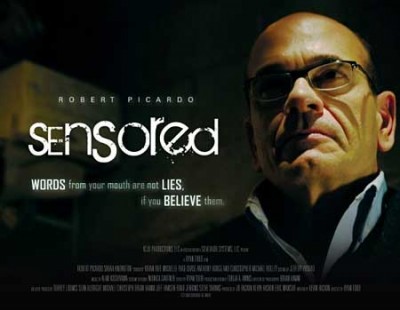 Cut to Wade’s basement where we see just how much he believes that statement. In a “Hostel” like set-up, he has a young man tied up and bound, hanging just barely so that the balls of his feet are resting on the ground. In front, Wade has a hold of the young man’s sister, her head submerged in a bucket of water. Seriously messed up. It is a very intense scene and when you open a movie like that, you start to wonder what other kinds of depravity you might be seeing next.

But Sensored has plenty of surprises in store so I won’t go and ruin them for you here. What did amaze me was that even in the slower parts of the movie, where most of the time you just have two people talking, there was still this feeling of heightened tension and emotion. I’m sure part of that was wondering what will happen next. Director Ryan Todd does a very good job at keeping the mood grim and surreal, the pacing steady and almost hypnotic.

That said, this movie won’t be for everyone. Some will feel it to be too convoluted for its own good, others the sense that they’ve seen this before. I admit I had a pretty good sense as to how the movie would end and for the most part, I was right. Trust me when I say that did not lessen my enjoyment of the movie. Besides, you probably won’t guess all of it.

Wade, in his own sick and twisted way, has some very interesting tidbits on life in general. Two of my favorite lines from him: “Innocence and trust, a bad combination in any world,” and “Profanity, the last resort when intellect fails.” To say that this is a complex individual is putting it lightly. There are many demons this man must fight on a daily basis. Give Robert Picardo lots of credit in the acting department as his performance really keeps this film afloat. And that’s not meant to dismiss the other actors. Everyone does a fantastic job and more than anything else will make you want to sit through this film to the end. You want to know how it all turns out.

Catch this one if you can although I can’t say that I would purchase it. A good film to see once, maybe twice if you want to go back and try to catch some of the subtleties. After that, not sure you would want to watch over and over. At any rate, makes you hope that the whole tortured artist stereotype is just that, more bark than bite. Trust me, you wouldn’t want any more Wade Mixon’s wandering the earth. Just one is one too many.