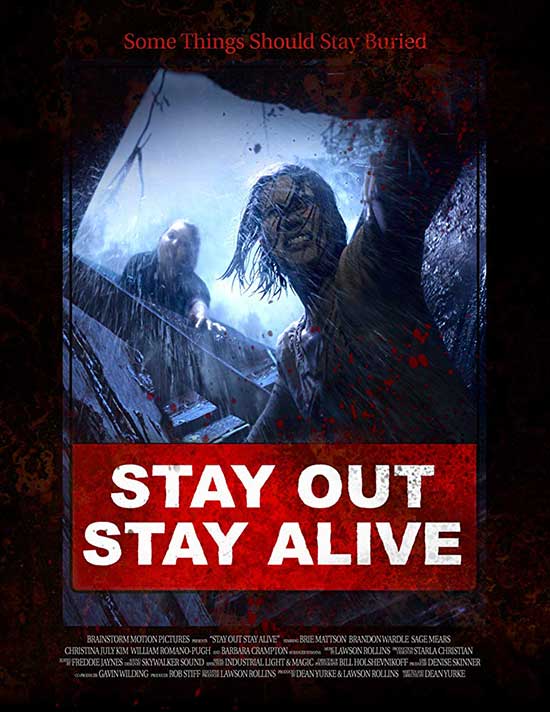 A small group of twenty-somethings go into the forest for sex, partying, and one member’s research of native American history. They stumble upon a gold mine and it has supernatural destructive effects.

Beautiful people await the viewer. Possibly the CW and/or the WB of the 90’s did the casting here. Good looking twenty-somethings and sex scenes set the pace for what is an entirely different paranormal horror movie, and I am glad it’s multifaceted. Whereas the pretty kid stuff had me yawning, the ghost stuff kept me glued to the screen. Despite some low ratings around the horror ratings block, I found this film a blast and really enjoyed it once the supernatural took over. You might say the movie truly starts when they stumble upon a dark scary ride inside an ancient gold mine.

Dean Yurke is our director. I am utterly in shock when looking at all his work in visual arts and design. He has done more than huge handfuls of work in that arena including the visual mastery of Star Trek. When one has a special skill, he should use it. Was he limited in his budget on this one? There are scant practical effects and very little cgi artistry.

He has also done a lot of composing. You do her some of that coming through and it is very hypnotic and well done. What happened? This film looks like college project. Fortunately, the cinematography of the forest, the very attractive cast, and the writing of the scenes inside the well keep this one enjoyable. It’s strange that such a master of visuals really didn’t provide with much though … just my observation. Most the cast are noobs. There is the appearance of a classic horror dynamo which is awesome to see: Barbara Crampton (Beyond the Gates … etc) She plays the creepy ranger/gift shop attendant. She isn’t in the film much but she reacts well to the plot and the young people in the cast. She reminded me of the scary old skull guy in Poltergeist 2.

Sacred Indian land is a safe bet for a director. If you’re an elder like myself (50) you recall the opening of Tobe Hooper’s Poltergeist. The Indians in that one are pissed because we made housing tracts on their burial ground. It’s a similar trope here but the added element is the question of whether the campers are taken over by the gold of the mine or possessed by the Indians who made the curse. It’s really nothing ingenuous. The supernatural trope and the dark well are a bit scary, but nothing huge. I decided what I liked best about the film is that psychology of the gold is ambiguous: it could be ghosts or … just their minds.

The “big man on campus,” Reese played by Brandon Wardle, gets more obsessed with the gold than anyone. As a result, his scenes make for some scary, tough stuff. I liked those performances best. They are all faced with the choice to become part of the greed or not. That goes on to include their corporeal attempt to cover it up. There is something very odd about the ranger and when Amy realizes she “knows too much” she is even tempted with the evil of murder.

In conclusion, this movie is very fun after they get to the gold mine. It’s worth a watch but it won’t win any awards in my humble opinion. If you’re a person who devours horror, you will probably ike this. If you’re looking for something commercial like “Hereditary” then you may not be as impressed. I am glad I watched this film and it’s nice when you have seen everything from 2019 that there are films like this that were made last year just a little bit like tiny diamonds in a mine. I give this film a 5/10, if you’ve seen it what did you think? Oh and in case I failed to share this opinion: Reese is a sick fuck!