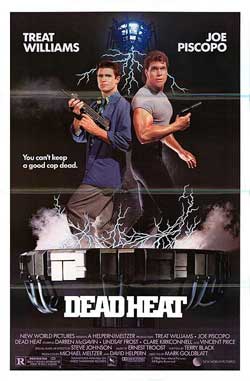 Roger Mortis and Doug Bigelow are cops that are dead serious when it comes to catching criminals. But when the criminals they’re chasing are already dead…things get complicated to say the least.

In the tried and true tradition of “48 Hours”, “Tango & Cash” & any buddy cop movie you can come up with comes “Dead Heat”, the story of a pair of detectives who are also best friends. Detectives Roger Mortis (Treat Williams) & Doug Bigelow (Joe Piscopo) are introduced as the film begins driving a souped up hot rod, cruising the streets looking for some bad guys doing what bad guys do. Immediately we see the personality differences between the two of them, Mortis is wearing a jacket and tie and his hair is short while Bigelow is wearing a t-shirt & leather jacket, bouncing around in his seat listening to music and eating a sandwich. Roger is all business & Doug is…well he’s just Doug. But they both take their jobs very seriously and they are radioed to assist in a shootout taking place in front of a jewelry shop that has just been robbed. When they arrive at the scene they are confronted with a squad of police being fired at by two gunmen who don’t seem too fazed by all of the bullets that are hitting them, as a matter of fact they’re just standing there laughing and firing back! You see, they’re already dead but what are a couple of (Literal) stiffs doing robbing a jewelry store when they should be six feet under? 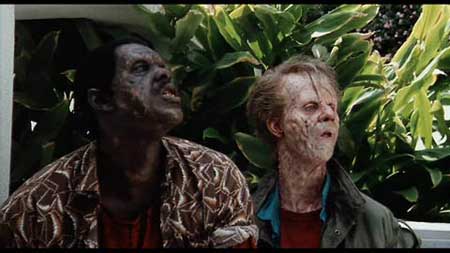 Mortis & Bigelow find out they’re dead when they go to the morgue to look at their bodies for clues. The coroner, Dr. Rebecca Smythers (Clare Kirkconell) recognizes the bodies as ones she has seen before. She actually performed the autopsies on them! Some clues on the bodies lead the duo to Dante Pharmaceuticals, where they meet public relations director Randi James (Lindsay Frost). As she attempts to answer Mortis’ questions, Bigelow sneaks off to investigate on his own and he ends up in a very large room with a machine that looks like a really souped up X-Ray machine with what looks like a body underneath it. Bigelow pulls the sheet off of the body and finds a very large, very obese, very ugly & very upset individual with what looks like two faces split down the middle! In addition to all that he’s also very dead and he immediately goes after Bigelow. Roger hears gunshots going off and immediately goes to assist his partner and in the resulting melee he accidentally gets locked up in a decompression room which someone (Whose face we don’t see) activates from it’s control room, immediately sucking out all of the air from the room. Doug is still battling the big ugly guy while Roger is trying to get out of the room. Doug eventually stops the big guy with some well placed cracks to the head using a fire extinguisher but he cannot get the door to the decompression room open in time and Roger dies. 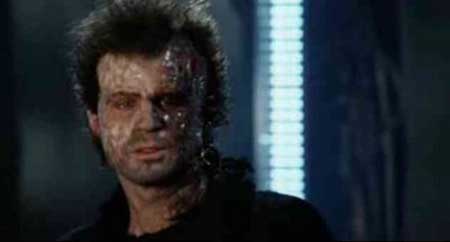 Turns out that the big machine is a resurrection device and Doug (along with Rebecca) figure out how to use it and resurrect Roger. Rebecca has figured out (by investigating the bodies of the jewelry store robbers) that the process will only last for 12 hours. The body starts to rapidly decompose afterwards and you die…again. She wants to take Roger to the hospital and find a way to keep Roger alive after 12 hours but Roger is adamant in finding out who is responsible for using the machine to resurrect criminals and refuses help until he does so, Doug concurs and away we go….! Their first suspect is Dr. Ernest McNab (Darren McGavin) who runs the facility and seems intent on thwarting the two of them at every turn. But there are a few more suspects to investigate and a lot more re-animated criminals & animals (yeah, I said animals) to defeat. But eventually all roads lead back to Dante Pharmaceuticals and one Arthur P. Loudermilk (Vincent Price) and his desire to perfect the machine and sell it’s abilities to the wealthy so that they can live forever.

As the film continues Roger’s skin is slowly getting darker since he’s decomposing the entire time. He realizes that he’s running out of time and there is a fairly sobering scene in a library where it dawns upon Roger that his time is nearly up and he almost quits but Doug convinces him to continue on and not leave what’s left of his life without purpose. So the two of them soldier on with Randi tagging along but is she there to help them or does she know something they don’t and is trying to slow them down before they can get to the truth? 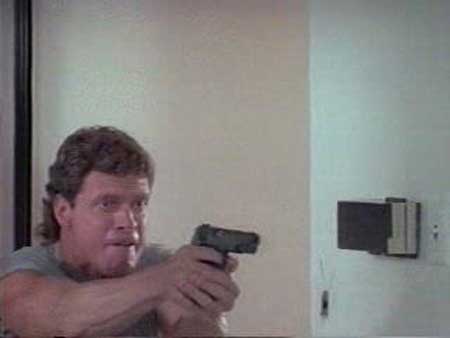 Directed by Mark Goldblatt (The Punisher) & written by Terry Black, “Dead Heat” isn’t without some charm. Buddy Cop movies are a dime a dozen and there isn’t a lot of difference between them besides the actors but “Dead Heat” puts a new spin on the formula by adding a twist straight out of “D.O.A.”(1950). That twist being the idea that one of the cops has only a few hours to figure out the crime before he dies and because of that “Dead Heat” really stands out from the crowd of similar cop films. The movie moves at a nice clip, the slower scenes are short and don’t get in the way of what the focus of the film is. Although some of the bits are kind of heavy handed (Roger Mortis? See what they did there acolytes?) overall the script is fast paced and the movie isn’t boring.

But charming as it may be is the movie any good? Well the actors do the best they can and it’s always great to see genre stalwarts like Price & McGavin on hand to show the pikers how it’s done (For good measure number one son Keye Luke is here as well)! Williams is a good actor who never seemed to become the big star I think he was poised to be at the outset of his career and he does his usual good job here as Mortis. Lindsay Frost is also a good actress whose face might be familiar to you from her television work, her final scene is both touching and disgusting. The weak link acting wise here is comedian Joe Piscopo as Doug Bigelow, he can’t seem to decide if he should deliver his lines as if he’s doing his stand up routine or if he’s acting in a film and it gets annoying really quickly. He also seems very intent on striking as many poses as he can to showcase his (admittedly) impressive physique, he even walks like bodybuilders walk…slow and purposefully with their chests thrust forward. It looked like he had a stick up his ass a lot of the time to me. 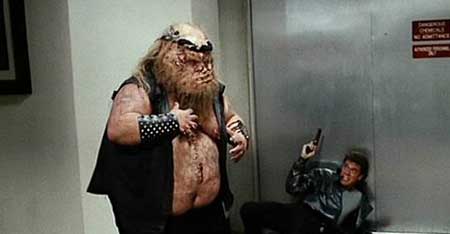 Steve Johnson’s makeup effects are what really sell the idea of the dead coming back to life here. Some of them are so good that you’d swear some sort of CGI was in use but I don’t even think there was any CGI back then, at least not in the movies anyway. The scene in the Oriental grocery store where a bunch of re-animated animals attack is an unsung classic & Johnson’s effects are what make it so. The film is really moist with blood & guts too, so much so that it was originally rated X and had to be resubmitted 8 times to the MPAA before it got it’s R rating. It definitely isn’t a slouch in the gore department although you’d hardly know it from looking at the cover art for the film which gives no clue to the fact that this film is a horror/comedy/buddy cop hybrid. 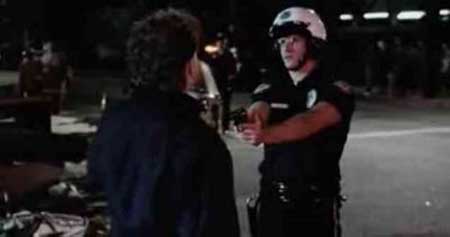 There are a few scenes that pay homage to other films strewn about as well, “Poltergeist” & “The Terminator” in particular but they don’t come off half baked and if you recognize them you’ll appreciate them that much more. A lot of the plot gets mired down by inconsistencies (Indeed, the final explanation doesn’t really make sense if you stop to think about it) and I wonder if the filmmakers realized that everyone in the cast is dead at one point but all in all a film like this one doesn’t need to make much sense, it just needs to be fun and in that aspect I think “Dead Heat” delivers the goods. It seems to leave itself open for a sequel but that never materialized and I think that’s a good thing, the whole idea of bringing Piscopo back isn’t very appealing to me anyway. All in all “Dead Heat” is an acceptable time waster that’s a lot more entertaining than that lousy cover design leads on and you ought to have a good time watching it as long as you turn your brain off for 90 minutes or so.

“You can watch more horror comedy films such as Dead Heat as well as other movies with LOVEFiLM. So why not sign up to their month’s free trial and start streaming your favourite films today.”